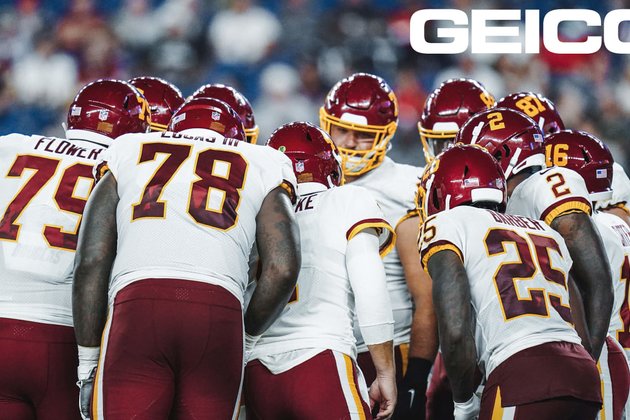 The Washington Football Team travelled to Gillette Stadium to play the New England Patriots in the first preseason game in two years. Here are some of the most memorable quotes from the week of preparation, as compiled by washingtonfootball.com, presented by GEICO.

Chas Roullier on if he missed the preseason games:

“Yes, to some extent. It’s great to get out there and kind of get your feet back underneath you and get back into playing football games again. I mean, ultimately, that’s what our job is. It’s not [that] we’re out here to practice, but when we go out there and play games, that’s what we’re here to do. It’s exciting to go out there regardless of whether it’s preseason or not. It’s always good to get those reps in and get back in the swing of things.”

Matt Ioannidis on why he is optimistic that Washington is ready to take the next step:

“I think this is as talented a team as I’ve seen here in my six years. I think collectively, this is the most balanced team. I think we’re pretty strong across the board. We’ve got good depth and I feel confident, and I feel encouraged watching these guys play.”

Tim Settle on how he balances pushing himself in camp and staying healthy for the regular season:

“That is part of being a professional. A lot of guys don’t realize that, but you got to take care of yourself and staying healthy is one of them. Just keeping up with your body, staying in your books, and having enough time to get up here and get yourself ready for practice and practice hard. Just be a professional.”

Montez Sweat on his friendship with DE Chase Young:

“[It] Has grown tremendously. We are two guys who kind of share some of the same things with both being first-rounders, we both came in kind of young. So, we kind of lean on each other with those aspects and examples of life and just continue to build a brotherhood.”

Ron Rivera on if there are any specific things he looks for out of a quarterback in the preseason that shows he is up to rhythm:

“No, that’s pretty much it. You’re looking to see if he has his rhythm, getting in and out of the huddle on time, control of the huddle calls and then his cadence, control of his cadence on the line of scrimmage. Is he is going through the checks, the processes he needs to? Communicating with the receivers, that type of stuff. And then again, throwing the ball where it needs to be thrown and making the right decisions. And like I said, I told you guys this before, when I’m done, I’m gonna take a look and see what the playbook tells us. Whether or not we spread the ball around properly and we used all of our assets out there or not.”

Sam Cosmi on how he felt about his technique in the first half of Washington’s matchup against the Patriots:

“I felt good, I felt I was able to move really well and put myself in good position to make blocks. Overall, like I said, I think my performance was really good, especially for just the half of the game I had. There’s always things to improve on. It was a good start, for sure.”

Taylor Heinicke on what Dyami Brown brings to the table:

“Dyami is a special talent, and you can just see it every day in practice. He’s getting better, he’s understanding the offense better, and he’s got world-class speed on the football field. I know a lot of the offensive guys are very excited about him and I know Fitz [Ryan Fitzpatrick] is really excited about him as well. So, again, we’re really looking forward to seeing what he can do this year.”

Chase Young on what it was like to make a play on Cam Newton:

“He’s very big! When I hit him, I felt like he was a big dude. But we’re both about the same size so a guy like me could take Cam down. You know, you got to take him down.”

Ron Rivera on how Jaret Patterson performed in his first preseason game:

“He didn’t surprise us. That’s what we saw in the young man. He had a terrific college career and he’s had a good camp so far. I think we expected him to do some positive things, so it was good to watch.”

Ron Rivera on finding new ways to use Logan Thomas:

“I wouldn’t say new ways to use him. What I would say is that we’ve been able to expound on the things that we use for him. You know, there’s some things where he’s not necessarily the primary guy, or he wasn’t the primary guy, but because of who he is and what he’s done for us so far, you put him in that sequence and say, ‘Hey, look, if you get this, let’s look here first.’ I just think as he grows, he’ll get a bigger part in the offense.”