I know, I know. It sounds ridiculous to complain about or imply that something cheap is a bad thing.

Clearly I’m going to have some explaining to do, which I’m prepared to do so bear with me.

I’m by no means against cheap mortgages or anything else cheap, but I do see one drawback that can present itself in certain situations.

Existing Homeowners Are Enjoying the Lowest Payments in Years 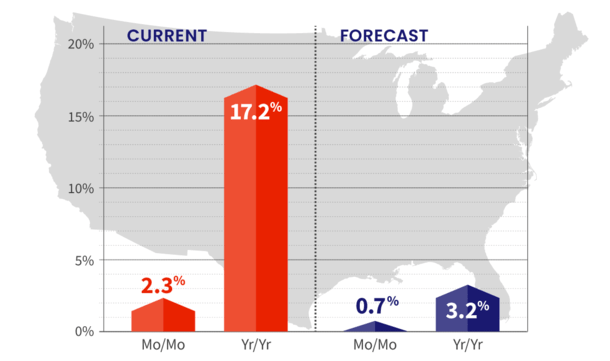 This is a result of record low mortgage rates coupled with increased wages and perhaps a sprinkling of inflation.

Yes, affordability has worsened for renters who have yet to enter the market, due to a whopping 17.2% rise in home prices from June 2020, per CoreLogic.

But for those who were already homeowners, monthly payments are often getting cheaper via a rate and term refinance.

These borrowers are turning in their old mortgages for ones with smaller balances and lower interest rates.

The combination is an even cheaper mortgage payment, which is great for the household balance sheet, right?

Homeowners Might Be Flush with Cash, But What Are They Spending It On?

Here’s the problem for some of these folks. If they’ve got super cheap mortgage payments, they might feel wealthier than they really are.

After all, we live in a time of 2% mortgage rates, which isn’t usual, though it’s been the new normal for quite a while.

These low mortgage rates may actually disincentivize borrowers to pay off their home loans.

They may even decide to get a brand new 30-year fixed to replace their old one, thereby resetting the clock when refinancing.

Or perhaps go with a cash out refinance and increase their debt load.

What’s worse though, is what they might do with the extra cash on hand.

If a homeowner refinances and is now saving $300 a month, where is that newfound money going?

Are they putting it into their retirement account, or are they going out and leasing a new luxury car?

A Cheap Mortgage Is Great on the Surface, However…

Imagine a time when mortgage rates are more expensive, and in turn monthly housing costs.

This type of environment may force borrowers to be frugal and could even induce extra mortgage payments.

The outstanding debt becomes more of a nuisance to the homeowner, and perhaps a deterrent to spend elsewhere.

At the moment, we are experiencing the inverse, so might the opposite behavior be taking place?

Instead of budgeting diligently and/or putting extra cash toward retirement and the mortgage balance, these homeowners could be out spending it like discretionary income.

Now a little bit of fun isn’t a problem, and everyone deserves to spend their money how they wish.

But I wonder how many homeowners are socking away this extra cash in a 401K, or using it to pay down their mortgage faster.

We’re Now Living Below Our Means

Anecdotally, I know a friend who feels like he’s living below his means because his mortgage is so cheap.

That can be a good thing and it’s certainly better than living above your means. But instead of saving the excess, he’s out spending it.

So when it comes down to it, the money is just flowing to other discretionary purchases he might otherwise not have made.

Meanwhile, he’s not saving more money for retirement, nor is he socking away cash for a larger move-up home.

It all kind of just feels like free money, which can lead to trouble. Not that extra cash in itself is bad, but how you might behave if you feel flush with it.

This is why it can make sense to continue making your old, higher mortgage payment post-refinance.

That way the savings are even more pronounced, and that money doesn’t just flow out to some other expenses you otherwise wouldn’t have incurred.

Now I understand some homeowners simply need payment relief, and there’s nothing wrong with that. It’s a great reason to refinance.

And you also don’t need to go nuts paying off your mortgage, especially with the debt so very cheap.

Just take a moment to consider the best use of that extra dough. Are you actually benefiting financially, or just buying a Tesla?