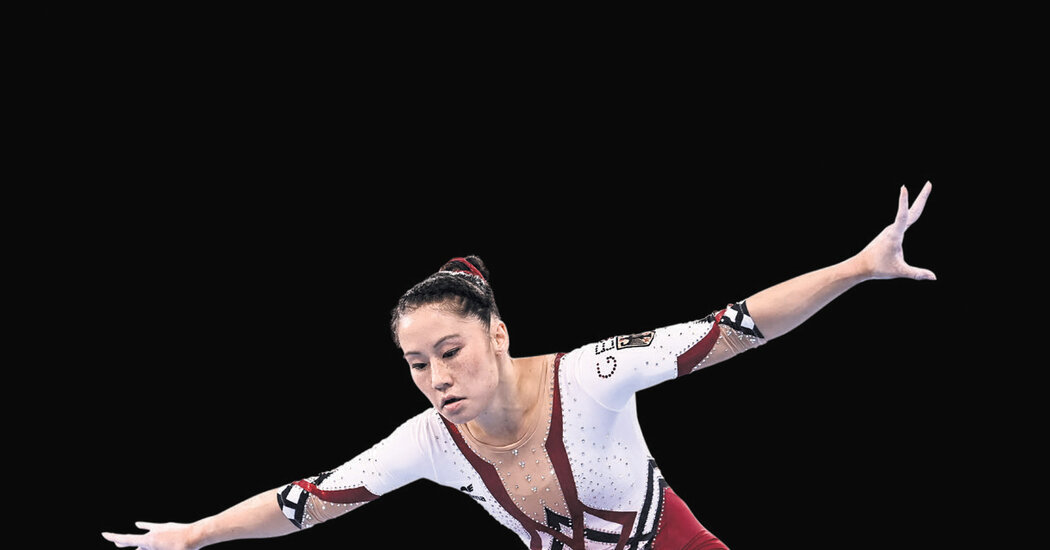 In the end, the mid-sleeved, long-legged unitard didn’t make it to the gymnastics team final at the Olympics. The German women who wore it to combat the “sexualization” of their sport were eliminated during the qualifying rounds. Instead, the usual crystal-strewn leotards cut high on the thigh were worn by the medaling teams.

The earlier shock over the Norwegian female beach handball players being fined for daring to declare that they felt better in tiny spandex shorts rather than tinier bikini bottoms (and act on their own desires) was not revisited because handball is only a Olympics Youth sport, and none of the beach volleyball players lodged a similar protest.

Yet, in many way these Olympic Games have been shaped as much by what is not there as by what is.

Like the questions about the ban on marijuana — now legal in many states — spurred by the absence of the sprinter Sha’Carri Richardson, or about what makes a woman, raised by the decision of the middle-distance champion Caster Semenya not to compete rather than forcibly lower her natural levels of testosterone, the controversies over clothing have triggered a re-examination of the status quo.

They have cast a spotlight on issues of sexism, the objectification of the female body, and who gets to decide what kind of dress is considered “appropriate” when it comes to athletic performance.

“The conversation has been a very long time coming,” said Angela Schneider, the director of the International Centre for Olympic Studies and herself a 1984 rowing Olympian.

It is the latest iteration of a debate that has been waged in offices, colleges and high schools; in the halls of Congress; on airplanes and on television stations, as individuals have increasingly rebelled against the traditional and highly gendered dress codes imposed on them — be it the need for a suit and tie, the ban on leggings or a demand for high heels.

Sports may be the final frontier of the battle, in part because it has been built on the foundation of gender differentiation, including how that is expressed through dress, as well as an entrenched hierarchy and financial interests.

The #MeToo and social justice movements have made equity and inclusion clarion calls of the moment, and that extends to what we wear to express ourselves and the concept of uniformity — which may be less a relevant idea than an antiquated interpretation of the social contract, one defined by a historic power structure that was almost always male, and almost always white.

Though that tension is most obvious in these Olympics, it exists at every level, from Little League to the world championships. And though the issues around clothing and sports occasionally affect men (aquatic sports, especially swimming, water polo and diving, are among the few in which the male body is on display and often objectified more than the female body), they fall heavier on women.

“It feels a little bit extraordinary that we are still talking about what women can and can’t wear,” said Brandi Chastain, the former member of the Olympic soccer team who, at the Women’s World Cup in 1999, became famous — or notorious, depending on your point of view — for whipping off her shirt in celebration of her winning goal, to reveal her sports bra. “But at least we are talking about it.”

Finally, she thinks, the conclusions may actually stick.

For as long as there have been women in competitive sports, it often seems, there have been attempts to police what they wear: to make it more female or less; to hide the body because it may be too enticing for men to see or to show it off to entice men to pay to see it; to play down the idea of power and raise the idea of clichéd femininity.

Because sports are grounded in the physical, it is almost impossible to divorce the idea of sexuality from the idea of the athlete — no matter how absurd it is to think that when a woman, or a man for that matter, is in the race of their life, what they are thinking about is seducing spectators.

(All you have to do is listen to post-event interviews with Olympians to know what they are thinking about: winning. Period.)

This is especially clear in tennis. In 1919, Suzanne Lenglen shocked Wimbledon by wearing a calf-length skirt with no petticoat and corset; she was called “indecent.” It happened again 30 years later, when the American player Gertrude Morales wore a tennis dress that hit mid-thigh and again the Wimbledon powers that were declared she had brought “vulgarity and sin into tennis.”

In 1955, when she was 12, Billie Jean King was barred from a group shot at a tennis club because she was wearing shorts rather than a short skirt. Even in 2018, Serena Williams caused a stir by wearing a catsuit at the French Open.

In 2012, just before the London Olympics, the Amateur International Boxing Association proposed that female boxers wear skirts, not shorts, to differentiate themselves from men. (A petition and uproar put an end to that idea.) This followed a similarly unsuccessful attempt in 2011 by the Badminton World Federation to make women players wear skirts and dresses.

When the women’s soccer league began to break through in the early millennium and players started to lobby for equal treatment, Sepp Blatter, then the president of FIFA, the international soccer federation, suggested they play in tighter, smaller shorts, to “create a more female aesthetic.” The implication being that the only way to get people to pay to see the players was for them to essentially sell their bodies.

That notion was shut down pretty quickly, though the viewership argument still comes up in conversations about dress and sports. (The assumption that the watching fan base is largely male is itself a questionable one.) It wasn’t until 2019, however, that female soccer players actually had uniforms made specifically for their needs rather than scaled-down versions of the male cuts.

At this point, an alien landing on Earth could be forgiven for being confused about the so-called skirts worn by women in tennis, field hockey, squash and lacrosse, since they resemble the vestige of a skirt — like a vestigial tail — more than an actual garment.

Likewise, it would make no sense that men and women wear such strikingly different amounts of clothing in, say, track and field, whereas in sports like rowing, basketball and softball they wear close to the same thing.

The answer, when sought, is usually “it’s the culture of the sport.” Culture, in this sense, being synonymous with history and legacy; with what got athletes involved in their sports in the first place; and with the symbols of what connects extraordinary players of today to those who came before.

Except, of course, it’s not always. Gymnastics leotards, which today have thousands of crystals, were fairly functional and unadorned garments for decades; basketball shorts rise and fall with the times.

“If a tradition was developed at a time when people were excluded on the basis of gender or race, then that tradition will not take their needs into account,” said Richard Ford, a professor of law at Stanford University and the author of “Dress Codes: How the Laws of Fashion Made History.” Consider: For decades it was a rule that the solicitor general of the United States wear a morning coat while arguing before the Supreme Court; when Elena Kagan became the first woman to hold the post, she pointed out that would no longer exactly work, and the rule was changed.

“Culture is maybe used as a reason and an excuse, but that doesn’t make it right,” said Cassidy Krug, a member of the 2012 Olympic diving team.

It’s also the culture of sports to concentrate power in the hands of the governing bodies, which rule with an iron fist, and in the coaches below them. “When someone is holding your dreams in their hands, it’s very hard to push back against that,” said Megan Neyer, a sports and psychology consultant and former Olympic diver. For years athletes have been told to be seen and not heard, a situation that helped facilitate the sexual abuse recently revealed in many disciplines, and which has made the debate around dress even more charged.

As social media has allowed athletes to create their own power bases, however, the playing field has also changed, allowing them to speak up in a way they never could before.

“There’s been a significant movement in the athlete’s rights movement,” said Ms. Schneider, of the Centre for Olympic Studies. “There has been a shift in power.”

Who Gets to Decide

The International Olympic Committee allows the National Olympic committees of each delegation to dictate their own rules when it comes to dress, with one caveat, according to Ms. Schneider: The result must “not be offensive.” But like office dress codes, which have generally retreated to the idea that employees simply dress “appropriately,” what may be seen as offensive or appropriate is highly subjective.

“It’s a very fluid word when it comes to women’s bodies and changes across cultures and religions,” Ms. Schneider said.

For example, when Ms. Chastain posed naked with a soccer ball for Maxim magazine after the soccer team win, it would have been easy to dismiss that as objectification by a magazine made for testosterone-fueled fantasy. But she said she felt “celebrating the good things you do as a woman was really important,” that it showed there was no hiding the connection between her power and success and her femininity.

And though it would be equally easy to dismiss the beach volleyball outfits as “Baywatch”-style sexploitation, given that the men play in tank tops and shorts, the International Volleyball Federation changed the rules in 2012 to allow women to wear shorts and tops with sleeves. Instead, the women often choose not to in order to avoid the discomfort of getting sand in their clothes, as Jennifer Kessy, who won a silver medal in 2012, told the “Today” show.

She also said the players refer to their uniforms as “competition suits” rather than “bikinis,” the better to frame the idea for the watching public: It’s not about provocation; it’s about performance and psychology. It’s not about you; it’s about me.

And being part of a group. As an athlete, you don’t want your clothing to distract from your actions, said Ms. Krug, the diver. It is a constant balancing act between being a person representing yourself and representing your team. Or in the Olympics case, your country.

The unitards worn by the German team were positioned as a political statement, but they were also an officially endorsed form of attire. It’s just that previously no gymnasts had chosen to wear them in a setting like the Olympics. In June, the rules of U.S.A. Gymnastics were changed to allow female gymnasts to wear shorts over their leotards — just like men.

Styles “evolve as social mores evolve,” said Girisha Chandraraj, the chief executive of GK Elite, which makes the leotards for women and men on 11 national teams, including the United States. That the women seem to prefer what seems like classic glamour (sparkles! shine!) and bare legs is their choice.

Which is, in the end, what this should be about: choice. “We have seen in study after study that when an athlete feels better about what they are wearing, they perform better,” said Catherine Sabiston, a professor of sports and exercise psychology at the University of Toronto. But only the athlete can define what clothing makes them feel better. Maybe it’s shorts. Maybe it’s jammers. Maybe it’s a unitard.