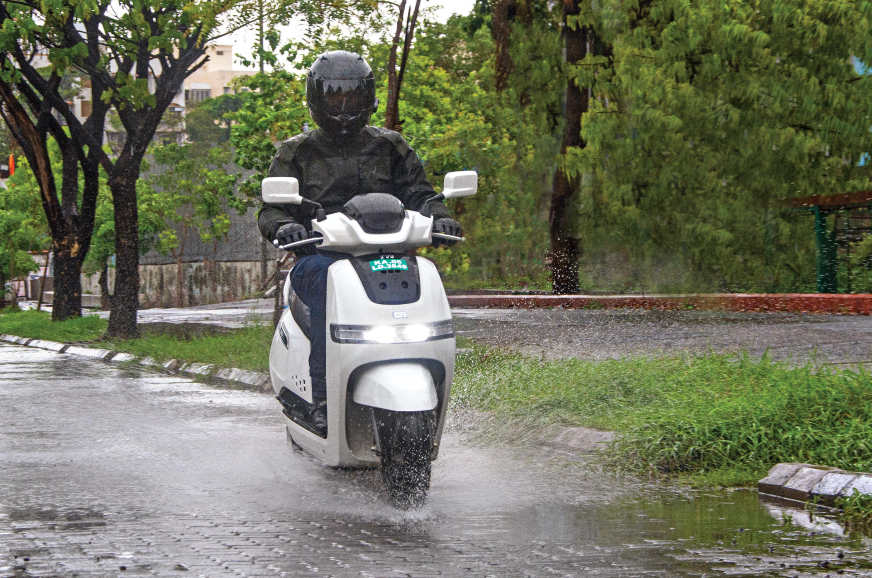 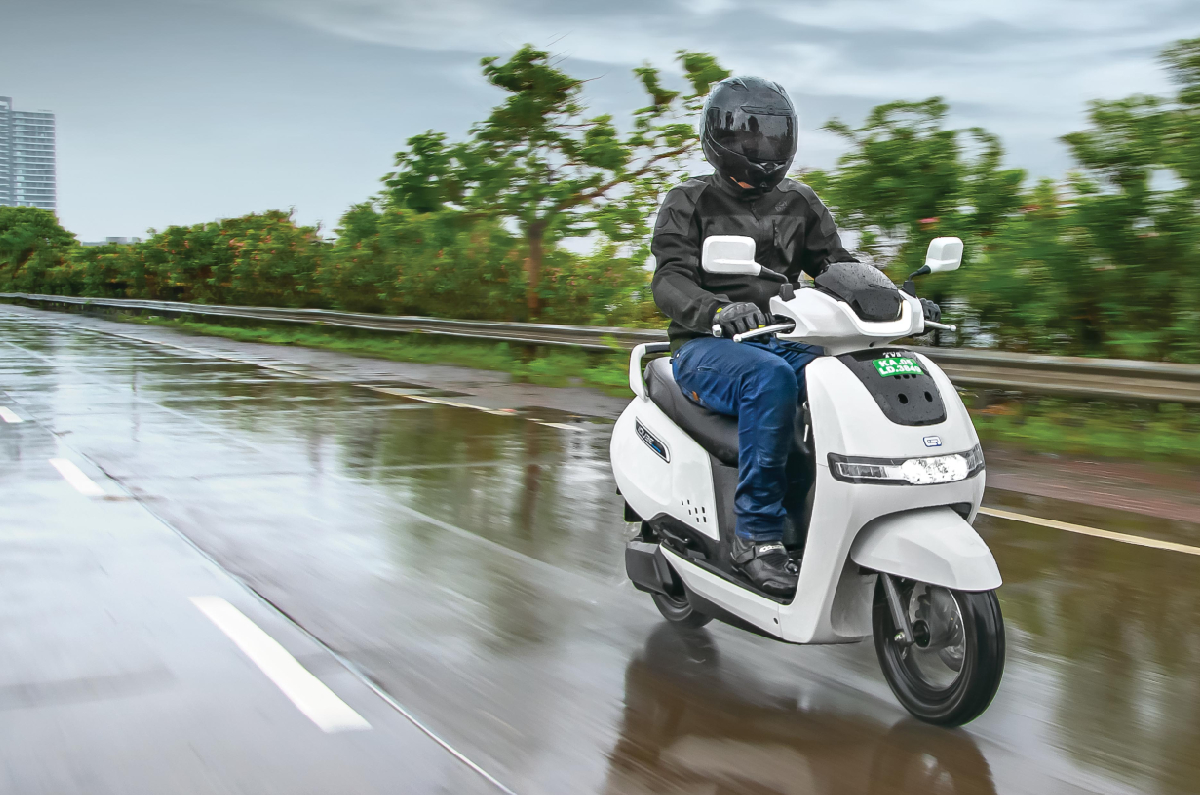 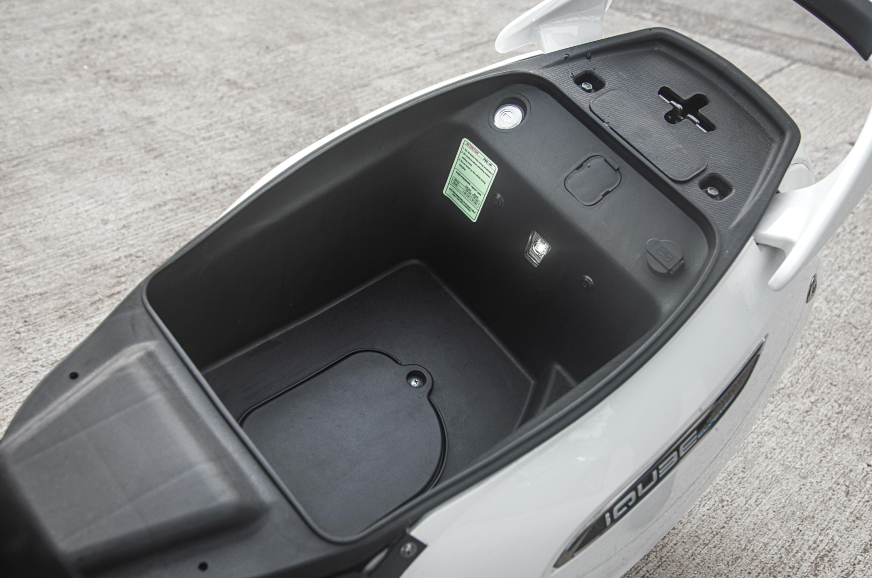 Moving on to the performance side of things, propulsion on the iQube comes from a Bosch-made hub-mounted motor. This unit has a peak power output of 4.4kW, putting it in between the Chetak and the Ather 450X. The torque figure, meanwhile, stands at 33Nm.

Before we get down to the nitty gritty, we’re happy to report that this motor doesn’t cut power when you lightly use the brakes. This is an issue that plagues Chinese electric scooters that use a similar powertrain setup. On the TVS though, there’s no issue, and thanks to it, the scooter isn’t as choppy in terms of power delivery in slow speed situations, like filtering through traffic or even taking U-turns. 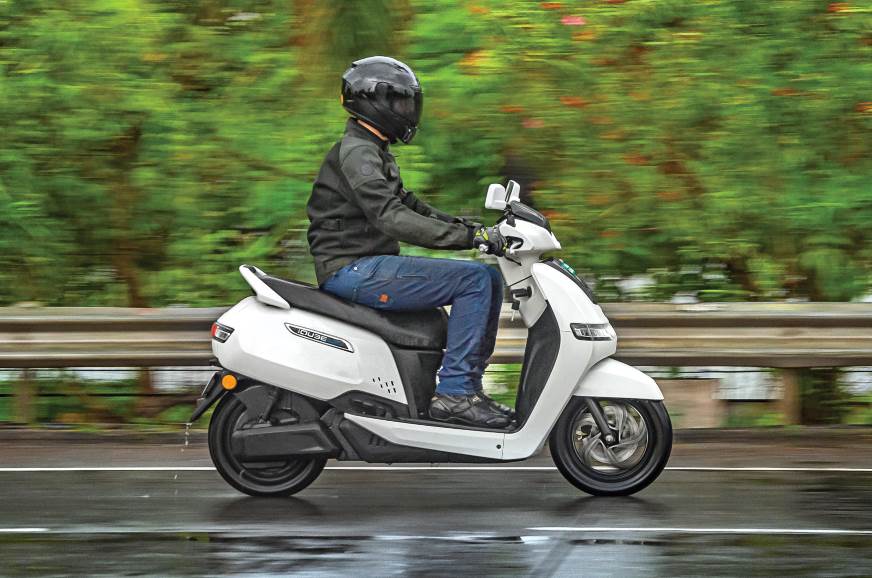 Brisk acceleration, and about on par with 125cc scooters, but the regen effect is strong.

The iQube is also less instant in its power delivery at lower speeds, and this really keeps things feeling natural. However, once you pass that initial bit of sedate (for lack of a better word) acceleration, the scooter pulls up its skirt and runs. It gets to 60kph from standstill in 8.58sec. This makes it as quick, if not quicker, than most 125cc scooters, including the BS6 Ntorq 125. After 60kph, the acceleration slows down quite a bit, but it will manage to go up to a speedo-indicated top speed of 80kph in Power mode. If its top speed were to be compared to petrol-powered scooters, it would be more in line with 110cc scooters and not 125cc ones.

There’s also an Eco mode that limits the speed to around 48kph. Unlike most ridiculously slow Eco modes we’ve experienced on some Chinese EVs, this one offers performance you can actually live with in most situations; we only switched to Power when we needed the extra performance to keep up with fast-moving traffic on some of Mumbai’s bigger roads.

The scooter will let you switch from Eco to the more powerful mode on the move, which is quite nice for overtaking manoeuvres. That said, if you are in Power mode and above the Eco mode’s speed limit, it won’t let you switch back till you lower your speed. This isn’t a big issue, but it’s a minor irritant if you only want to use the Power button for sudden bursts of speed. 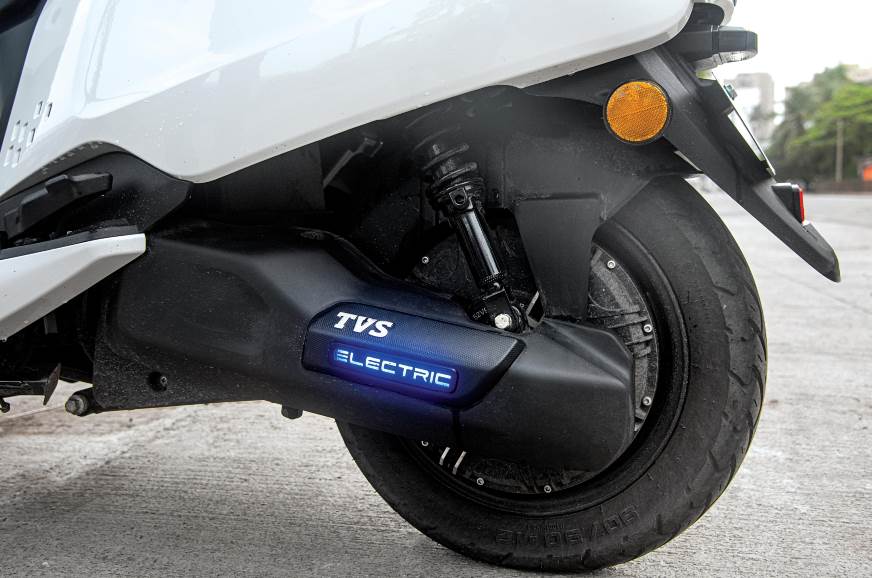 The ‘electric’ logo leaves a cool blue reflection on the road in the dark.

Something that does feel a little less natural than a petrol-powered scooter is the aggressive regenerative braking system. When it kicks in, as you go off the throttle, it will steadily slow down the scooter to a standstill, even if you are going downhill. You do eventually get used to it and end up using it like brakes, but it would’ve been nice if it was a little less aggressive or if there was a mode that would allow you to tweak the level.

The iQube uses the same 220mm front disc brake as the Jupiter and it’s adequately communicative and powerful. When we first rode the iQube at TVS’ test track, the rear drum brake was prone to locking up easily. Since then, TVS has re-tuned its CBS system and the rear is much better behaved, which in turn results in a safer braking setup.

The iQube fares well when it comes to range. It managed to cover 48km in Power mode and a liveable 74km in Eco mode. The range in Power mode is impressive if you factor in that it doesn’t automatically switch to Eco in the last 20 percent of remaining battery life, like the Ather 450X does. Something else that was quite nice was that the performance didn’t drop significantly as it ran out of juice. We found that the iQube has a charge time of around 5 hours, which is only slightly higher than its rivals.