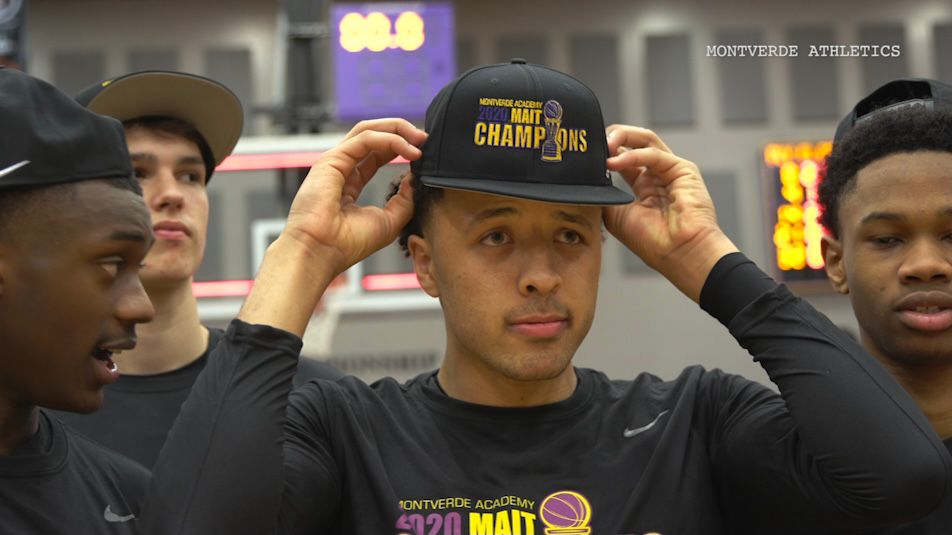 On the outside of Montverde Academy’s gym there are three giant posters.  One for R.J. Barrett, one for Ben Simmons and one for D’Angelo Russell.  The messaging from the Lake County, Fl school is clear.  Come here and you too can get drafted by the NBA.

“I think we are very transparent,” Montverde head basketball coach Kevin Boyle said.  “We try to communicate with the guys, you know if you tell me you want to be a pro, well then do we agree this is what it takes.”

Boyle has been Montverde Academy’s head coach since 2011.  He came from St. Patrick’s in New Jersey were he coached his first number one overall draft pick Kyrie Irving.  His Montverde teams have won five Geico National Championships and six of the last nine high school national championships.

It’s my responsibility to get you to be professional and work hard,” Boyle said. “I don’t want you to come back ten years later and say coach you should have made me work harder.  You should have pushed me.”

The list of former Montverde Academy players in the NBA speaks for itself.  Simmons, Russell, and Barrett have their own billboards.  This years draft class might have their own statue when it’s all said and done.

“Well this would definitely be our best class we’ve ever had in the pure fact the number of people that we get drafted,” Boyle said.

Boyle believes Montverde could have up to five players selected in the first round and seven overall either drafted or signed.  That’s more than college powerhouse programs like Duke and Kentucky.  Six players drafted would be the most by one school since Kentucky in 2015.  Here’s this years list.

Former Oklahoma State freshman Cade Cunningham is the jewel of the class.  He has a chance to join Irving and Simmons as number one picks to play under Boyle.

“He’s special because he’s such a great leader,” Boyle said. “He played quarterback as a little kid and I think that really helped him with his leadership ability.”

Cunningham was part of a 2019-20 Montverde team that some have called the best high school group ever assembled.

“That clearly was the best team that I’ve seen,” Boyle said.  “I think we have the facts based on the schedule, based on the point differential and based on where guys are now.”

Cunningham is projected to be selected first overall by the Detroit Pistons.  Boyle has no doubt he will be a great NBA player.

He’s like a coach on the court I could easily see him be a coach when he’s done playing,” Boyle said.  “He’s going to have a terrific career to me there’s no question he’s going to be an all-pro player not just an all-star.”

Cunningham is one of three players from that 2019-20 team that could go in the lottery.  Florida State forward Scottie Barnes has been projected as high as 5th to the Orlando Magic.

“He checks a lot of boxes in the sense of the defensive end he can cover almost any position,” Boyle said of Barnes.  “He’s working hard on his shot and if he improves his shot like I know he will and that becomes consistent from the perimeter then he’s going to be an all-star.  He also has incredible energy and motivation.  He’ll see someone walking down the street with a Florida State shirt or Montverde shirt on and want to give them a hug.”

“He’s a knockdown shooter and he’s a good one on one defender,” Boyle said.  “He can space the floor if you don’t stay with him he’ll bang a three.  If you stay with him it gives the one on one guy a chance to get to the window and score with no help.  So it’s kind of pick your poison with him.”

As successful as his former players have been it doesn’t come without adversity. Ben Simmons playoff performance with Philadelphia was one of the biggest talking points of the playoffs and has led to swarms of trade rumors.  Boyle said he didn’t speak to Simmons directly but he did talk with people close to him.

“I think the bigger thing of it is Ben keeping an aggressive mind to attack the basket and not shy away from the foul line even though he struggled with that, but to go to the foul line,” Boyle said.

Simmons shot 34.2% from the free throw line during the 2021 playoffs.  According to ESPN Stats & Information that is the worst free throw percentage in NBA playoff history for a player with at least 70 attempts.  In the conference semi-finals versus Atlanta, he was held under 10 points in four of the seven games.

“He was roughly a 70% foul shooter in high school,” Boyle remembered.  “So it becomes a little bit of gets inside your head when you start thinking of things.  I think he’s got to clear that out of his head and not be afraid to fail.”

Boyle believes a possible solution for Simmons is an in game shot quota.

“It sounds crazy but I think they should say you’ve got to get five or six shots in the first quarter and if you don’t, you don’t start the second half,” Boyle said.  “If it’s a close game in the fourth quarter you’ve got to attack and shoot twice because you can’t be a fourth quarter guy that’s not looking to shoot because you’re going get fouled.”

Boyle gets asked about his former players a lot, but you can’t step on campus without wondering who is next.

“Next year coming up we have Dariq Whithead who is in the top five in that senior class,” Boyle said.  Whitehead is a 5-star small forward according to 247 sports.

“He’s 6’5 just versatile,” Boyle said.  “He’s got a good chance to get his name called one day as well.  He’s been here since 8th grade it’s his time to totally shine.”

Boyle’s got a good thing going at Montverde Academy.  Pretty soon they are going to have to make room for more billboards.