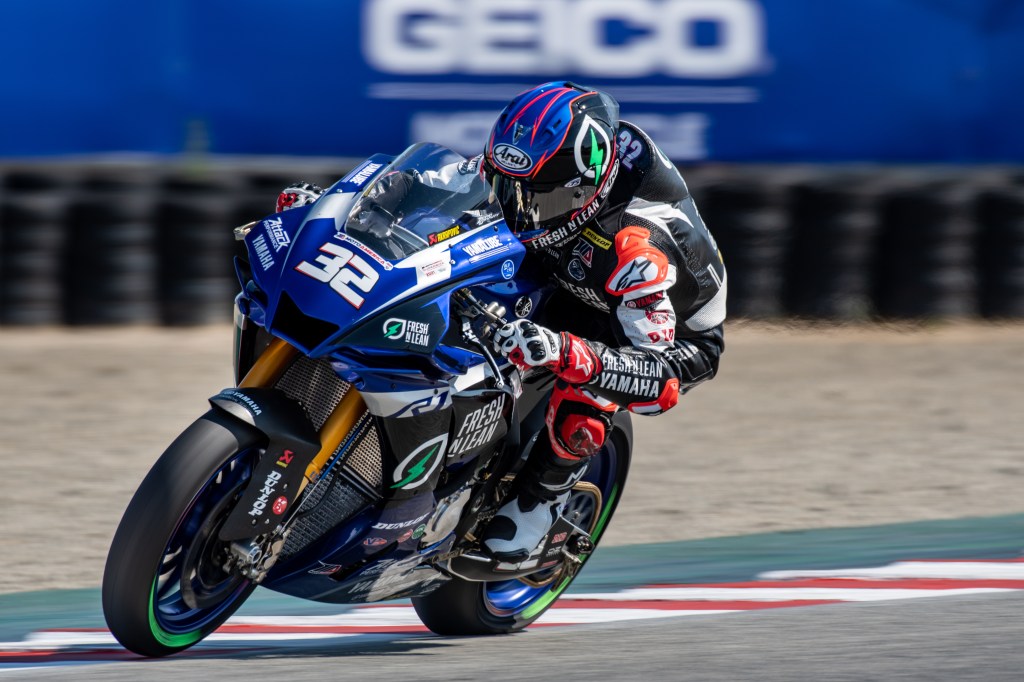 His failure to finish the season-opening race is so far in the rearview mirror for Jake Gagne that it’s out of sight.

The San Diego native is putting together a historic season, turning the HONAS Superbike series into an exhibition of his team’s superiority.

In half a season, Gagne has moved into a tie for 19th place all-time on the Superbike series for wins with Aaron Yates and Kevin Schwantz. With 225 points this season, he has a commanding lead over Mathew Scholtz, who finished third in the race.

“This was the toughest race of the year,” Gagne insisted. “I had to earn it.”

You can make that argument for both races this past weekend. In two 20-lap races around the famed 2.238-mile world-renown Laguna Seca track, Gagne’s winning margin was 1.3 and 1.1 seconds.

With a little more than half the season remaining, Gagne is putting together a streak for the ages. While runner-up Loris Baz and his Ducati were able to close the gap on the track in terms of time, the challenges have been met, even embraced.

“We made some adjustments after Saturday’s race and the bike seemed to respond,” said Gagne, who is riding a Yamaha. “Even with my bobble on Turn 5 early in the race, we pulled through.”

Gagne, who has been nearly flawless on the track during this winning streak, which has stretched over two months, was referring to a rare mistake he made coming out of Turn 5 on the second lap, in which the bike wiggled momentarily out of control.

“It kind of threw me out into the dirt,” said Gagne, who hadn’t won a HONOS Superbike race until this season. “There was some contact. But I was able the correct myself.”

At that moment, Scholtz had pulled even, perhaps slightly ahead of Gagne for the first time since winning the opening race of the season, albeit briefly.

“I tried to capitalize,” said Scholtz, who has been on the podium (top-three finishes) seven times this year. “I saw some dust and squeezed next to Jake. But then he went right past me.”

The poll setter in Friday’s qualifying, Gagne lead from start to finish, fending off Baz, who continued to apply pressure throughout the race.

“We closed the gap this week,” said Baz, who earned his third straight podium finish. “It was a tough first half of the season. But we’re getting better results.”

Gagne, who clocked speeds of 156 mph on the straights, was consistent in his lap times, seldom dipping under 1 minute, 25 seconds. Minus the gaffe early in the race, the 28-year-old was dialed in.

When asked before the race what would it take to challenge Gagne, Baz, who is from France, responded by saying “1.1 seconds faster.”

Sean Dylan Kelly is putting together a winning streak of his own in the Supersport series, capturing his fourth straight race and seventh of the season, fending off defending points champion Richie Escalante in arguably the best race of the day.

Kelly responded to the pressure put on by Escalante and third place finisher Cory Ventura, who took the lead briefly on the third lap of a 19-lap race.

“No, I did not expect a challenge from Cory,” Kelly said. “When he got by me, it was hard to get by. I had never ridden with Cory. So I had to cool it for a lap.”

Once there was a crease, Kelly zipped right past Ventura, only to feel the heat of Escalante for the second consecutive day.

“I’m really stoked for getting the double at Laguna,” said Kelly, who has now been on the podium five times this season.

Kelly is the series points leader in the Supersport series.

It wasn’t the homecoming Gonzales native Frankie Garcia envisioned, as he finished fourth in the Hooligans season opener, and seventh in the Mission King of the Baggers series finale.

Garcia, who came into the Baggers series in third place, never recovered after starting in the seventh position after Saturday’s qualifying.

The 30-year-old Garcia, whose father was part of his mechanics’ team, was already on an adrenaline rush before jumping on his 600-pound Indian Challenger for the Baggers eight-lap finale, having just finished the Hooligans race 10 minutes earlier, where he held third firmly until the final two laps, placing fourth.

“I was disappointed not getting on the podium,” Garcia said. “It’s tough to get on another bike so quickly, especially two bikes that are so different in weight. All the braking marks are different.”

Travis Wyman opened the day by holding off current points leader Corey Alexander by .032 hundredths of a second in the Stock 1000 14-lap event.

“This is probably one of the greatest achievements in my racing history,” Wyman said. “I am so emotional right now.”

Wyman did not start on the pole, coming from the back to chase down Alexander.

“When Travis got up there, I knew my hands were full,” Alexander said. “But we kept the momentum getting the pole position and maintaining the series points lead.”