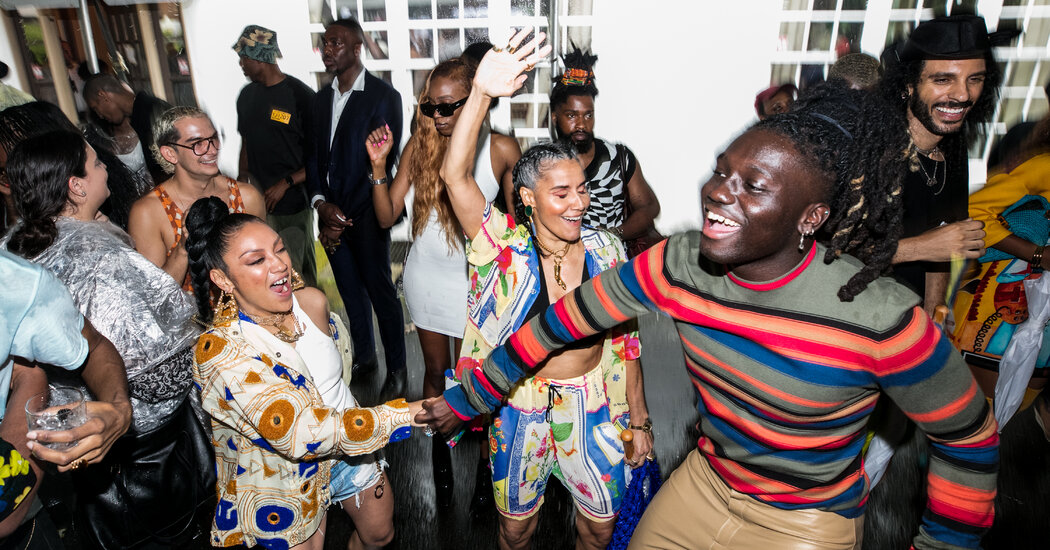 Irvington, N.Y. — Roughly two hours after the start of the Pyer Moss Couture 1 show was delayed by lightning, thunder and rains of biblical dimensions, the designer Kerby Jean-Raymond darted onto the lawn of the white stucco mansion where the event was staged and passed out blunts.

Miraculously, if only briefly, the torrent let up. “Did you notice the minute he brought out the blunts, the rain stopped?” said Blake Newby, a beauty and style editor at Essence. “I’m not saying it was a sign. But it was a sign.”

Symbolism was rife on Thursday, both subtly and overtly. The importance was lost on few, for instance, of Mr. Jean-Raymond’s decision to stage the event at Villa Lewaro, a 30-room mansion erected in the early 20th century by Madam C.J. Walker, a daughter of enslaved Louisianans who went on to train 23,000 sales agents to hawk Black hair care products, becoming America’s first self-made female millionaire.

“Arguably, Black beauty would be completely different if she hadn’t existed,” said Angelina Darrisaw, a noted career coach who for the chartered bus trip to Irvington from New York City had brought along a bottle of Veuve Clicquot brut. “Historically, Black beauty was valued less than white-centric beauty,” she said. “Now all that’s changing.”

The message of radical change was underscored, too, by the printed labels slipped inside each individual cork-capped vial of weed. “We’re tired of waiting on reparations and an apology,” Mr. Jean-Raymond wrote, or words to that effect (the actual message is not printable here). “Til then … we’re getting in the weed business.”

Firing right up, many guests made the best of a bad situation and got down to weed business. By that time, they had already rushed back and forth several times from their seats on the lawn to open-sided tents. There they huddled in plastic ponchos provided by Mr. Jean-Raymond. Or some did. Others preferred to risk getting wet rather than do anything to detract from their resplendent get-ups.

“Do you like the look?” asked Quin Grant, a model, who had traveled to the show on one of the designer’s buses. “The shoes are Saint Laurent,” she said, showing off a pair of $2,000 platform YSL ankle boots with heels not exactly engineered for a stroll on the lawn. Then she name-checked her various other labels. “The dress is Kith, the bag is Loewe, the bracelet is Cartier, the watch is Rolex.”

Anticipation of the Pyer Moss show had run high ever since it was announced that Mr. Jean-Raymond would be the first-ever Black American designer invited by France’s Chambre Syndicale to present a collection during couture week. Even under ordinary circumstances, though, the designer’s presentations are hot tickets because as happenings they are rare (he last showed in 2019), communitarian and extravagantly operatic.

This one promised to have been no different, had it taken place.

Its philosophy — and to a large degree that of Mr. Jean-Raymond’s career — was Black power achieved through self-reliance and-self determination.

A string orchestra on hand bravely, if intermittently, played through the rain, as did a sodden drum group At one point, Elaine Brown, a prison activist, writer, poet and former chairwoman of the Black Panther Party, sauntered onto the runway to hurl fiery rhetoric at the crowd . Interrupting her remarks, she gave an unexpected shout-out to Tracee Ellis Ross, seated in the front row, near the designer Byron Lars, the designer and social media tyro Slum Weirdo and the rapper ASAP Ferg.

“My sister, I know your mom well, I just had to break that out,” Ms. Brown said, referring to Diana Ross before resuming exhortations to restart the revolution.

As a fashion show, Pyer Moss Couture 1 may have been a bust. As theater, though, the gathering was still an amazement.

It was minutes before 5 p.m. when Mr. Jean-Raymond finally capitulated to nature and posted a message to his personal Instagram account that the show would be postponed. (“The energy ain’t it,” he wrote. “I have a better idea … will make the ticket link tomorrow morning till the seats are gone … for now, we gonna go party and dance in the rain.”) Immediately his guests flocked to the bar and a buffet line for an after-party feast. Clearly, in a post-pandemic frame of mind, people were determined to have a good time.

Carrying plates of jerk chicken, jerk shrimp with tamarind, mac-and-cheese, fried snapper and Rasta pasta, guests shrugged off the teeming rain as a mere inconvenience and danced to a D.J. set of old-school classics by the Isley Brothers, the Spinners and Stevie Wonder.

“Do you think Anna Wintour would be in this tent dancing?” an observer inquired of the modeling agent and activist Bethann Hardison, as she swayed to Donna McGhee’s breakup classic, “It Ain’t No Big Thing.”

“At this stage,” Ms. Hardison said. “She probably would.”