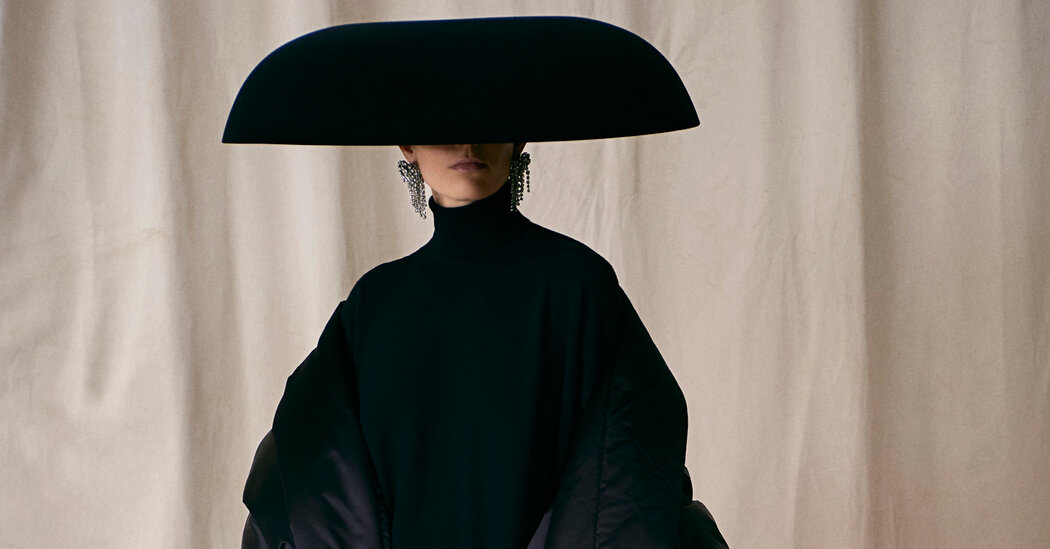 PARIS — The ivory carpet was back. So were the ivory walls, with scroll bas-reliefs framing each curtained door; the marble staircase; the strict, anticipatory, hush in the air. Ssshhh. Take your seats. Respect the artist.

Fifty-three years after Cristóbal Balenciaga closed the doors of his couture salon for the last time, Demna Gvasalia was reopening them, recreating the rooms as precisely as possible, picking up where the man generally known as the greatest couturier of them all had left off. Mr. Gvasalia didn’t even call what he was showing “One” — though it was not only his first couture, but the first one under the house’s current owner, Kering. He called it “50.”

Sitting on one of the gold ballroom chairs, where a single crimson carnation had been placed precisely on the diagonal on each seat, it was hard not to think: The walls are probably freaking out.

Because this was not a trip through some weird wormhole to the mid-20th century. It was a master class in how to learn from the past to get most effectively to the mid-21st. How to question everything you thought you knew, and reassess.

Isn’t that what we’re all supposed to be doing right about now anyway? History is one of the trending topics of the moment, in all its problematic dimensions: Who gets to define it, how you teach it, how you talk about it. Designers aren’t exempt.

Viktor & Rolf, masters of the couture meme, built an entire show as a meditation on not just the brocade and bejeweled trappings but the meaning of royalty — and the varying uses of the word “queen.” Chitose Abe of Sacai took on the legacy of Jean Paul Gaultier as his house’s first “guest” designer, splicing the signatures of the Gaultier canon (pinstripes, corsets, the striped sailor shirt, tartan, fisherman knit, the boiler suit) into her trademark hybrid constructions, casting the familiar in a new light and serving as a reminder of just how influential Mr. Gaultier’s work has been.

And in the Balenciaga salons at 10 Avenue George V, as much as everything was kind of the same, it was also completely different.

Instead of the old front row — Mona von Bismarck, Bunny Mellon, Babe Paley, Gloria Guinness — there was Kanye West (or at least someone who seemed to be Kanye West; he had a scarf covering his entire head, so it was hard to tell), Lewis Hamilton, James Harden, Bella Hadid (just jetted back after an appearance on the Cannes red carpet) and Lil Baby.

Instead of only women on the runway, there were men, too; people of all ages, shapes and kinds of beauty plus one quasi-celebrity: Ella Emhoff, the stepdaughter of Vice President Kamala Harris.

Instead of crocodile skin, there were “tiles” of leather patched together by hand in an intricate trompe l’oeil; instead of actual feathers, shantung silk plumes wafted in the breeze; and instead of terry cloth, “micro-knifed leather.” Who even knows what that is?

Expectations were subverted — not just about who gets access to couture or who is included, but what constitutes a couture garment; the totems of the everyday and the street turned into elite objects of desire.

Mr. Gvasalia played with the sack dress, sure, that Balenciaga almost-cliché, but it became a sack jacket: nipped in at the waist, with a portrait collar wrenched out at the clavicle to form peaks around the neck and pooched out at the shoulder blades, like it had been caught in the act of being shrugged off. They came in fluorescent orange gabardine and shaggy, silvery faux fur, but also denim that itself had been treated as a precious fiber, sourced from the original American machines, now in Japan, with silver-plated hardware.

He made a swing-back T-shirt in padded black satin with fluted sleeves and a slightly raised neck, paired with loose jeans and a gorgeous, floor-sweeping opera stole. “I suffered for three months for that T-shirt,” he said after the show. “It’s much easier to make a ballroom dress.”

Though to be fair, he made those too (most often referencing the archives), in chiffon wrapped round and round the body or elaborate embroideries rendered somehow degraded by time. He turned parkas and anoraks and bathrobes into entrance-making opera cloaks in ruby, shocking pink and chrysoprase; offered tuxedo suits with jutting shoulders and a molded, hourglass line.

Many were worn with black mushroom hats by Philip Treacy that looked like a whole lot like the plastic Artemide Nesso table lamp created in the mid-1960s, around the same time Balenciaga shut up shop. Coincidence? Yeah, right.

It all had the consideration, monkish purity of form, and rigor that defined Balenciaga in the first place, powered by the pull-the-walls-down forward momentum that marks Mr. Gvasalia’s work and first propelled his breakthrough, back when he was making everyone salivate over hoodies and sneakers and Ikea bags. The result pierced the torpor and discontent of the last year and put an end to all those whiny questions about does fashion really matter any more. It made you want to get dressed and go out and do something.

Obviously, not everyone can, at least in these clothes (honestly, very few people can). But at this point, Mr. Gvasalia is so widely copied by every mass market brand that before you know it there will be some version coming to a store near you.