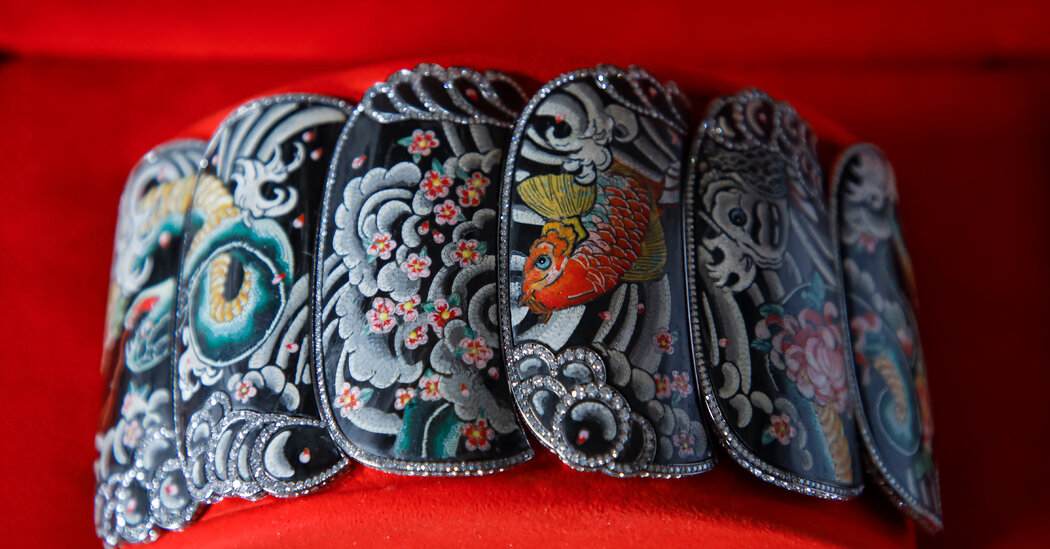 In a tiny studio atop a historic palazzo in central Rome, Maurizio Fioravanti creates miniature worlds of massive fantasy.

He is one of the world’s few micromosaic artists, a self-taught, 30-year practitioner of a painstaking craft that involves setting thousands of tiny glass tesserae, often measuring less than 1 millimeter in diameter, into small metal panels to create images of such remarkable detail that they appear to be photographs. The work is so time-consuming that Mr. Fioravanti produces fewer than 10 pieces a year, with prices starting at $50,000 for a ring.

They are sold by the brand Vamgard, which Mr. Fioravanti and Virginie Torroni, a Genevan gem dealer of Italian descent, founded in 2015.

In one bracelet, the intense color and depiction of light and shadow on a nest of serpents makes the reptiles appear three-dimensional. They threaten to slither out of the bracelet’s four panels, each of which is topped and tailed with full clouds and crashing waves realized in diamond pavé.

Mr. Fioravanti, 51, describes himself as an alchemist. Over the years, he has developed about 30,000 color recipes for his micromosaic palette, rejecting the modern colored glass that is commonly available in favor of creating his own hues using old techniques and minerals that are no longer easily found. “I go to the rivers, the mountains, the desert to find the minerals to help me create colors,” he said from his studio during a recent video interview.

He also constantly experiments with the metals that frame his works. The snake bracelet, for example, is a concoction of more than 300 layers of carbon fiber and bronze leaf, a subtly textured backdrop to the serpentine drama on its surface. “I love to play with illusion,” Mr. Fioravanti said with a smile.

Another piece, a dramatic cuff that first appears to be as soft and floaty as silk, is actually a rigid combination of medical-grade steel and titanium netting embroidered with diamonds and decorated with frogs diving off lily pads.

“Vamgard is like a fantastical garden full of experiments,” Mr. Fioravanti said. “It’s very rare I use the same material in a new jewel.”

Micromosaics were first developed in the Vatican workshops in the mid-18th century, according to Alice Minter, curator of the Rosalinde and Arthur Gilbert Collection at the Victoria and Albert Museum in London. (Its collection of antique micromosaics is exceeded only by those at the Vatican, which still has a mosaic studio, and the Hermitage Museum in St. Petersburg, Russia.)

Vatican mosaicists in the late 1700s, who had been trained to create and restore the more than six miles of mosaics adorning St. Peter’s Basilica, eventually branched out into smaller-scale work that didn’t rely on church commissions. The micromosaic paintings, jewelry and furniture they created became collector’s items for wealthy tourists who came to Rome as a stop on the Grand Tour.

“European aristocrats and royalty, including Napoleon and the czars of Russia, quickly became seduced by this new craft,” Ms. Minter said, adding that micromosaic studios followed in other Italian cities on the Grand Tour.

The father of micromosaic is widely considered to be Giacomo Raffaelli (1753-1836), a Roman artist who initially trained as a sculptor and painter. In 1775, at age 22, he staged what was believed to be the craft’s first selling exhibition.

He became internationally celebrated for the range of color in his lifelike butterflies and goldfinches and his classical urns. Ten shades of blue might be used to convey a shadow in an inch-wide brooch. A signed piece still commands top prices at auction today, like the 100,000 British pounds ($139,050) paid in June at Christie’s London for a micromosaic and marble tabletop attributed to his studio.

Eventually, however, the popularity of micromosaic work led to mass production, which, in turn, led to a drop in quality. By the turn of the 20th century, the craft was all but dead.

Arthur Gilbert, a British entrepreneur and decorative-arts collector who had made his fortune in property development in postwar Los Angeles, discovered the forgotten art in 1970 when he came across a picture that he initially thought was created from brush strokes but later realized was tiny tesserae.

“He became a maniac for micromosaics and was fascinated by the technique,” Ms. Minter said. “It was unfashionable at the time so he hoovered up the market, amassing an unbelievable variety of objects from large tabletops to earrings,” all at a fraction of the prices they would command today.

Ms. Torroni, who runs G. Torroni, a gem and antique-jewelry dealer in Geneva, with her father and its founder, Giuseppe, has been surrounded by antique micromosaics since she was a child. Her father began collecting them when he was 20, and now she does, too.

A cousin, a friend of Mr. Fioravanti’s, first suggested in the mid-2000s that she meet the artist. “Initially I said, ‘No, I don’t have the time,’” she recalled during a phone interview.

But later, when she finally saw his work while on a trip to Rome, it was love at first sight. “I see a lot of jewelry in my work,” she said. “But this was another world. His jewelry makes you dream.”

Thus Vamgard was born, marrying Mr. Fioravanti’s mastery of micromosaic and virtuosity with materials with Ms. Torroni’s eye for gemstones and vast address book for the finest gem dealers and setters. They started cautiously, presenting two or three pieces to test the market.

“The reaction though was unbelievable,” Ms. Torroni said. “Even among experts, people couldn’t even understand what it was.”

Her father, who has worked in the jewelry business since he was 13 and now is in his mid-70s, was blown away by the poetic quality of a Vamgard bracelet he bought in 2017 entitled “The Dream of Karpa Koi,” which depicts the Chinese legend of a koi fish’s becoming a dragon. “My dad sees a lot of jewelry, but when he saw the bracelet he had tears in his eyes. ‘This is a masterpiece,’ he said,” Ms. Torroni recalled.

Symbolic & Chase, an antique jewelry dealer based in London’s Mayfair neighborhood, offers Vamgard’s work alongside a small collection of antique micromosaics. Its director, Sophie Jackson, said the magic of Mr. Fioravanti’s creations was in their combination of practical technique and dreamlike poetry. “I think it’s something to do with the marriage of a virtuoso technician and a boundless imagination,” she said. “It’s very rare that you come across someone who combines both.”

“I love Maurizio’s blend of technique, based on impassioned, obsessive study, with his complete commitment to the intense emotional element of the jewel,” said Vivienne Becker, a jewelry historian and author. “It’s this that transforms his mosaic work from a breathtaking craft into a work of art, and it’s this that also gives the antique art of micromosaic new relevance today.”

For Mr. Fioravanti, micromosaic technique is just one of a number of arts that he draws on in perfecting his pieces. “I feel like the conductor of an orchestra, leading the greatest artisans in all Europe,” he said. “The men setting stones in Geneva, my goldsmith in Italy, my stone dealer in Paris.

“I want to put all the knowledge all together in one place,” he said, “and above all, I want to bring you joy.”