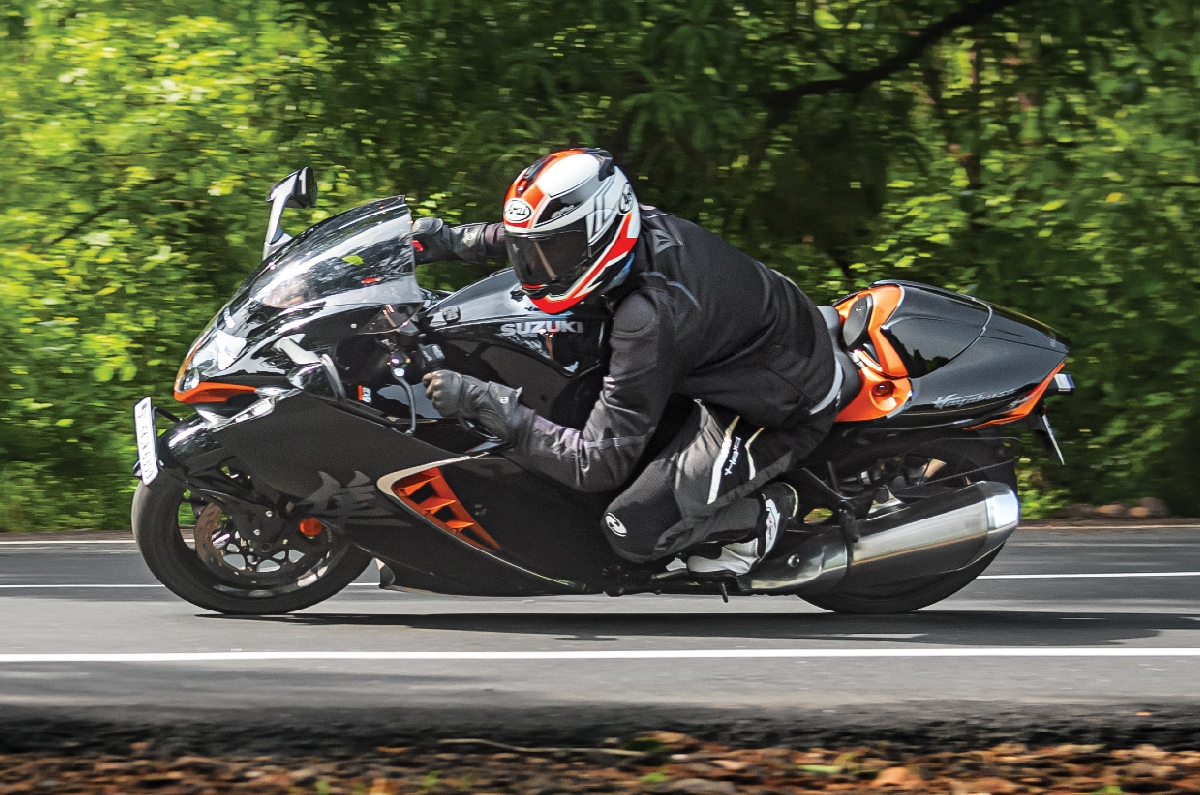 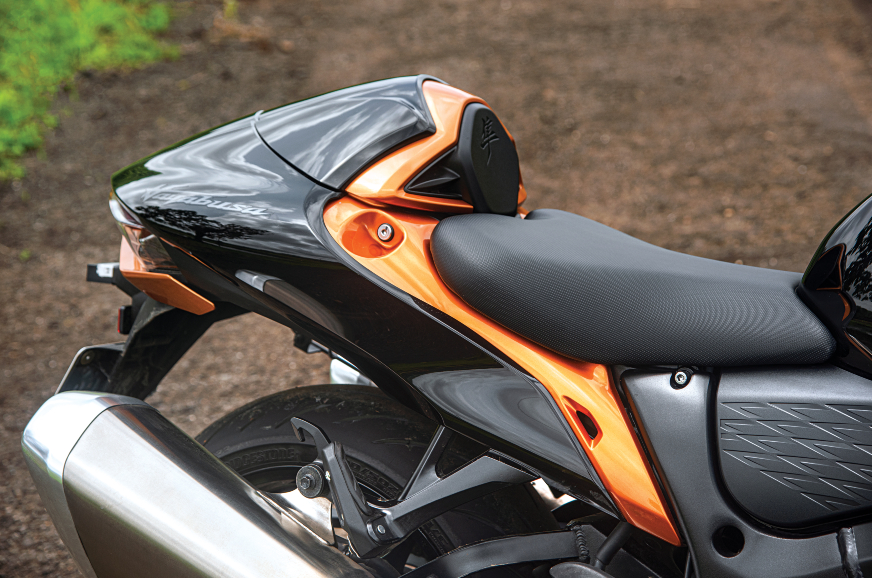 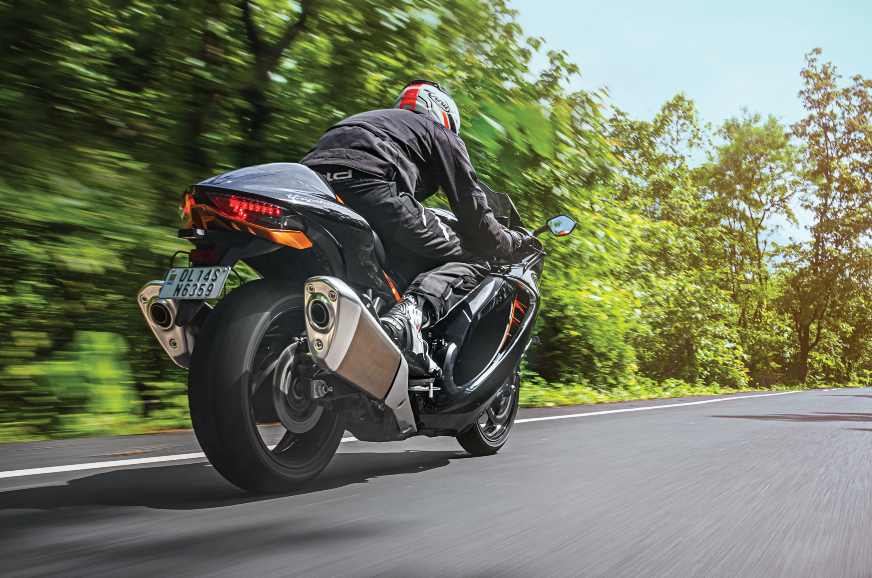 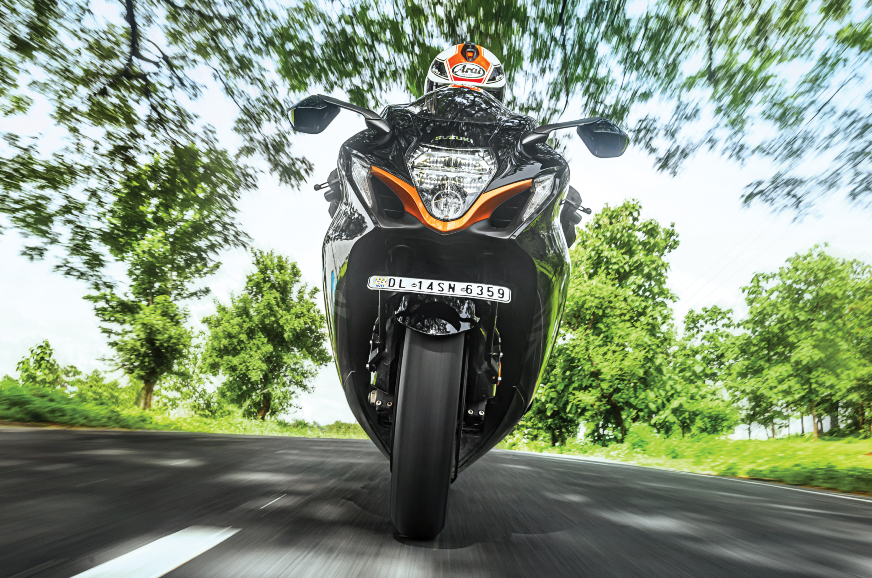 It all seemed to be going perfectly. I’d managed to leave the house by the crack of dawn, found a fuel station that fed the bike the hideously expensive high-octane fuel it was running out of, and managed to break out of the city without any hiccups. Best of all, after weeks of gloomy weather, it seemed like we’d be in for a day of sunshine. But even as this sensational motorcycle and I flowed through some smooth and wide open highway roads, there was a lingering feeling that something wasn’t quite right. And then it hit me – I was on the wrong highway! I was merrily blasting my way to Gujarat when our shoot location was in a completely different direction and well within the state of Maharashtra.

A hurried analysis of good ol’ Google Maps revealed that getting back in the right direction involved cutting across a 25km long stretch of state highway that was in pretty terrible shape. Anxious to not upset Kuldeep who was most excited about shooting the bike in the early morning light, a feeble apology was texted with the promise that I’d be there as soon as I could. And with that, I pointed what is designed to be one of the fastest bikes in the world down a road it really shouldn’t be on and opened the gas. Welcome to our review of the 2021 Hayabusa!

It’s been a few years since I last rode a Busa, but it’s not a bike that’s easily forgotten and there are things on the new one that quickly stood out. For one, Suzuki says that it now gets revised suspension tuning, which doesn’t sound like much, but in reality, the new bike feels much more plush. The lovely ride quality that I was enjoying on the open highway was now helping the bike swallow up bad roads in a rather unexpected manner. I still had to be mindful of the 125mm of ground clearance and protecting the rims, but so far, so surprisingly good.

Eventually, the broken, pothole-strewn road led back to the national highway I was supposed to be on and 20 minutes later, I’d arrived wide-eyed, pulse-raised and in half disbelief at how devastatingly, yet effortlessly quick this bike can be.

Now, at this point, the keyboard warriors out there will be cracking their knuckles in anticipation of moaning about how the new Busa has less power and is therefore a lesser motorcycle. In part, I will agree that this was always a motorcycle of excess and some ridiculous new power figure would have been great to brag about. But unlike the folks who make shouty comments online, Suzuki decided to take a more measured and well-thought-out approach here. 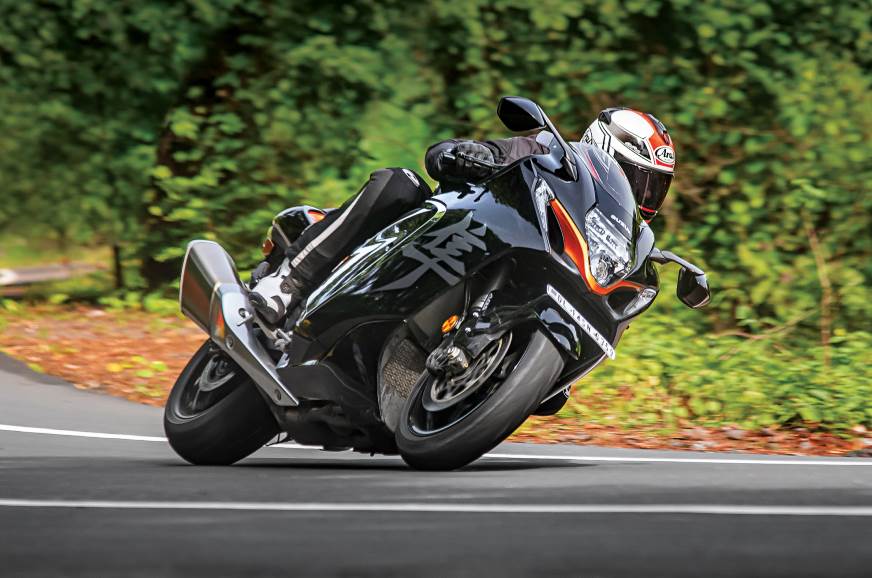 New brakes are a much needed improvement.

This engine displaces the same 1,340cc as before, but it’s been heavily reworked with new pistons, connecting rods, and camshafts, among other things. As part of the update, the motor has lost 7hp, taking the total down to a (still mental) 190hp and 150Nm. Despite this, Suzuki says this is actually a faster accelerating Hayabusa than before because the loss in top-end power is made up for with even stronger low and mid-range performance.

The bike is still electronically limited to 299kph, so there is no change in the official top speed, but what really makes the Busa special is its incredible mid-range performance – you just don’t need to rev this bike out. On almost all litre-class superbikes that scream to 14,000rpm or 15,000rpm, the fun only starts upwards of 6,000rpm, but with the Busa you can stay below 5,000rpm all day long and travel at
a very brisk pace.

However, if you do take it up to the 11,000rpm redline, be prepared for life-changing levels of acceleration to match the wild 200-plus horsepower superbikes. In fact, with its long, low and heavy nature, this bike puts the power down more effectively and is less prone to pulling big wheelies under acceleration. I have no doubt that this is still one of the fastest accelerating road-legal bikes on
the planet.

Life on the road

But the Busa is not so single dimensional. This is one of the few superbikes I’ve ridden that can also be quite mellow and enjoyable, even when cruising at a gentle speed, especially in the lower power mode. The engine sounds great, too, with a deep and snarling intake sound that is typical of big Suzuki inline-fours. While the engine is smooth, there are also some mild sensations to be felt in the handlebar, seat and foot pegs at different RPMs, all of which add to the sense of character. 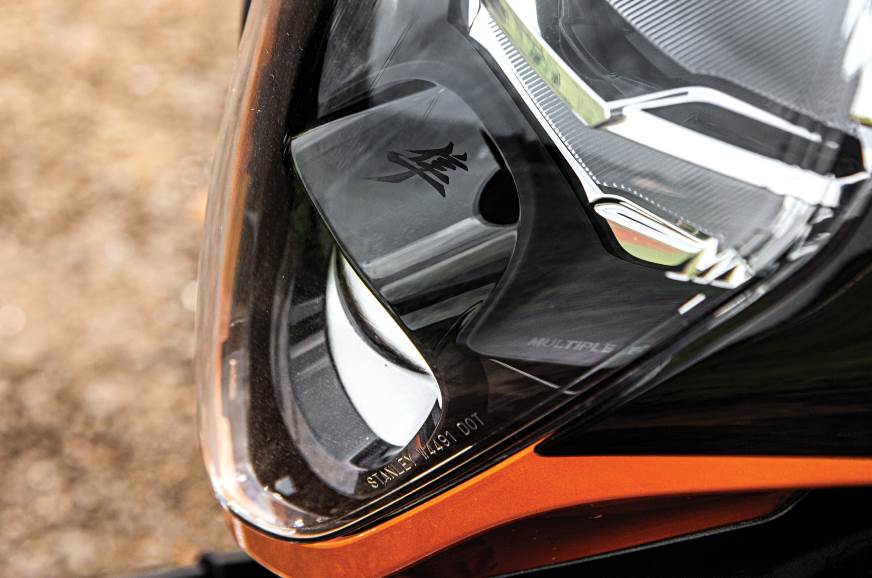 Neat Kanji detailing in the headlamp.

Another reason for its appeal as a road bike is the riding position. It’s still pretty sporty and committed, despite the fact that Suzuki has pulled the clip-ons closer to the rider by 1.2cm. But it’s also very spacious and definitely kinder on the wrists than a track-focused superbike. Short riders will also love the 800mm seat height, but for (6’1”) me, the tight distance between the foot pegs and the seat causes cramps after a few hours of riding.

The versatility of this machine has also been improved by a brand-new electronics package. The Busa now packs top-tier IMU-aided rider assists, including ten-level traction and wheelie control, as well as three-level engine brake control. As before, the bike has three power modes, but it now also gets three user-customisable riding modes. Additional features include three-stage launch control, cruise control, hill hold, a programmable speed limiter, and a new bi-directional quickshifter that works quite well, but is a little clunky at lower RPMs. The bike also gets a new TFT display in the middle of its iconic five-pod instrument console and the snazzy lights at the front and rear are now full-LED. 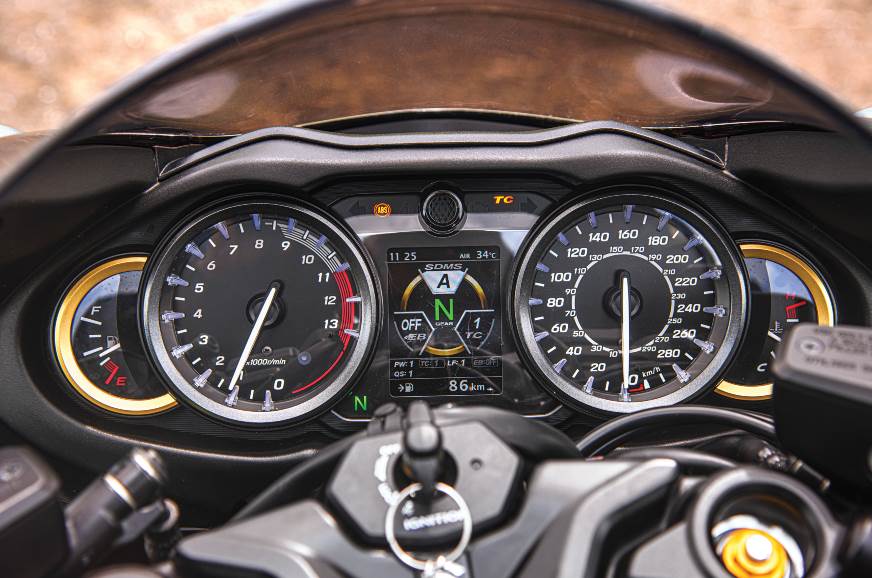 Iconic dials get a new TFT.

While the electronics got a huge upgrade, Suzuki left the chassis and swingarm alone, although there is a new rear subframe. With the same chassis, it comes as no surprise that the Busa continues to be a rather amazing handler, despite its sheer bulk. Fun fact – the international model weighs two kilos less, but government-mandated things like the neatly executed saree guard and awful looking front number plate holder bring those two kilos back.

It definitely feels cumbersome at parking speeds, but once you pick up a little pace, the Busa is easy to ride and the turn-in on corner entry is surprisingly sharp for a bike this big. On its Bridgestone S22 tyres, the bike stays impressively composed at high corner speeds, but the luxurious suspension does start to feel a bit soft when you really push hard. However, it is adjustable at both ends, so you should be able to find a setup that suits your riding style.

One of the nicer upgrades are the new Stylema front brake calipers and 10mm larger front discs. With the old bike, there was a feeling that the brakes couldn’t keep up with the fearsome power, but these ones work far better, with strong, reassuring performance. Again, it won’t stop like your typical 1,000cc superbike because it weighs about 60kg more, but the Busa will slow down well enough!

Once at a standstill, be prepared for a never-ending barrage of camera phones being pointed at your bike. This is still one of the most striking bikes you’ll ever see, and the new sense of aggression brings a modern feel to the iconic silhouette. The rear end, with the accessory seat cowl, looks particularly handsome, although it’s funny how the Busa
can make even a 190-section tyre look small. Quality levels are pleasing and this is a bike that will fill you with joy when you stare at it parked in your garage. Of course, there is no such thing as a perfect motorcycle and the Busa has a few niggles. 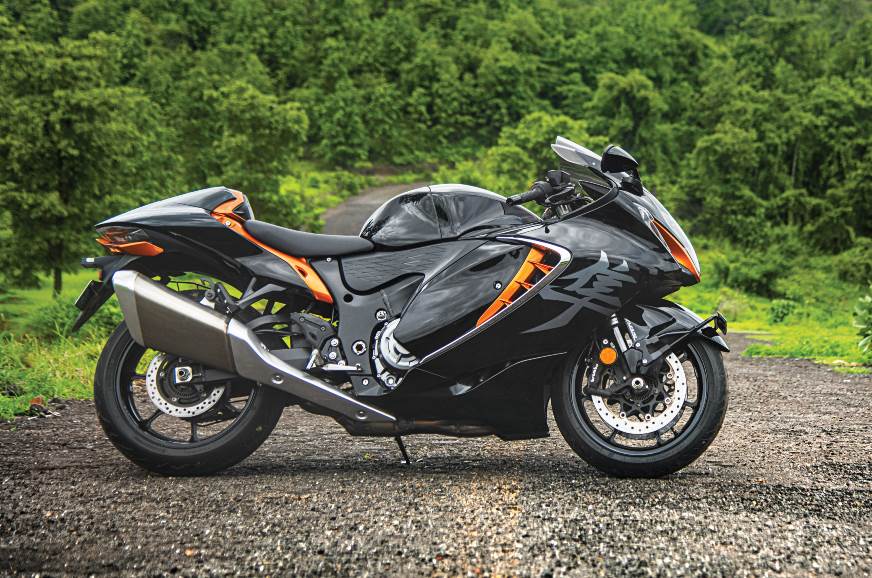 The trademark egg-shaped aerodynamic silhouette remains, but it now contains sharper lines within.

The stylish new mirrors look much nicer than before, but the view they offer isn’t good enough. The accelerator also feels quite heavy, which can get tiring, but the cruise control system helps out on long highway rides. Then there’s the fact that your forearms will hit the fuel tank when the handlebar is at full lock. This reduces the sense of confidence while taking U-turns, which is quite important on a bike this big.

Desire has a price

The 2021 bike comes across as an improvement over its predecessor in almost every manner. At Rs 16.4 lakh (ex-showroom, India), it also costs about Rs 2.7 lakh more than the old Busa, but I think the price is justified. With the death of the ZX-14R, it has no direct rivals on sale today, but is priced similarly to bikes like the Kawasaki ZX-10R and the Ducati Panigale V2. Honestly though, it makes for a far more enjoyable sports bike on our roads than either of those two.

It may no longer be the world’s fastest motorcycle, and there are better high-speed tourers or all-out sport bikes available today. But the Suzuki Hayabusa exists in a realm of its own and I think it now has an even bigger sense of appeal. The legend will certainly live on.