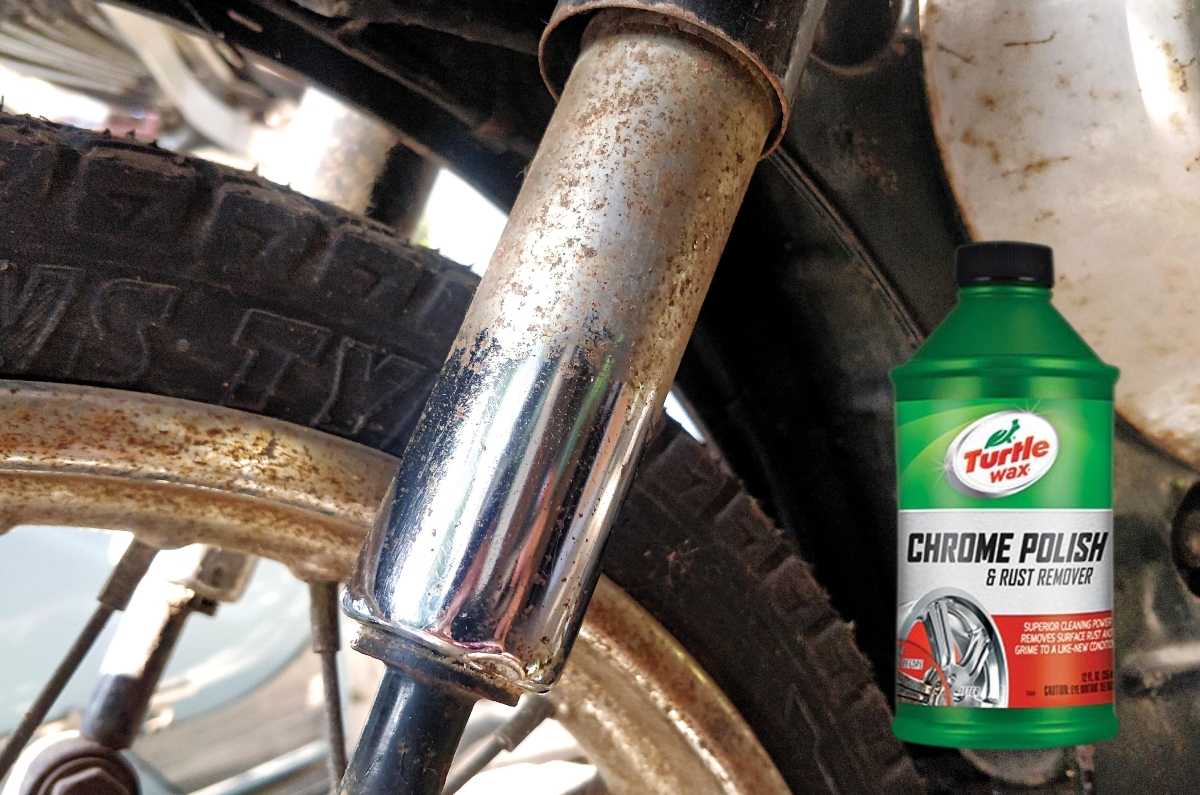 Black may be the new chrome, but to many, a shiny chrome panel that you can see your reflection on is hard to beat. Some brands like Harley- Davidson produce a quality of chrome that’s tough to match, but most aren’t as good. Many other chrome-laden motorcycles could begin seeing signs of corrosion as early as five years in, and even earlier in some cases, but that depends on factors like salinity of the water and air. This is where Turtle Wax’s Chrome Polish and Rust Remover comes in.

Wasting no time, I decided to try the product on many varieties of chrome surfaces as I could. The first test subject was a 2018 TVS Radeon. Since it isn’t that old, the chrome was in decent shape to begin with, but components that are closer to the road, like the exhaust shield, leg guard and foot pegs, had developed a hazy layer of oxidation. This proved to be duck soup for the Turtle Wax and all that was needed was one quick rub with the product.

I then moved on to restored or aftermarket chrome on some components from my 1972 Jawa that underwent the chroming process around eight years ago. This particular bike has been used only around 500km since its restoration, but the coating was showing signs of age. Not only was it hazy, but it had also lost patches of chrome. The Turtle Wax delivered a similar result here, completely removing the oxidation. While it did improve the overall appearance of the motorcycle, it can’t do magic and the component will still have to undergo the chroming process again to fix the missing patches.

Lastly, I decided to try my luck on heavily rusted chrome on a Yamaha from over 50 years ago. The result is what you see in the picture above, it truly was shocking. While much can be contributed to the quality of the original factory chrome, the product absolutely gave it a new lease of life. Heavy surface rust and oxidation disappeared within a minute of rubbing the area. While the panels still have a considerable amount of pitting, I won’t be getting them re-chromed. The proof is in the pudding with the Turtle Wax Chrome Polish and Rust Remover and it’s an easy-to-use product that I would highly recommend before you spend a small fortune at a restoration shop.

How to Use eSports Marketing to Grow Your B2C Reach