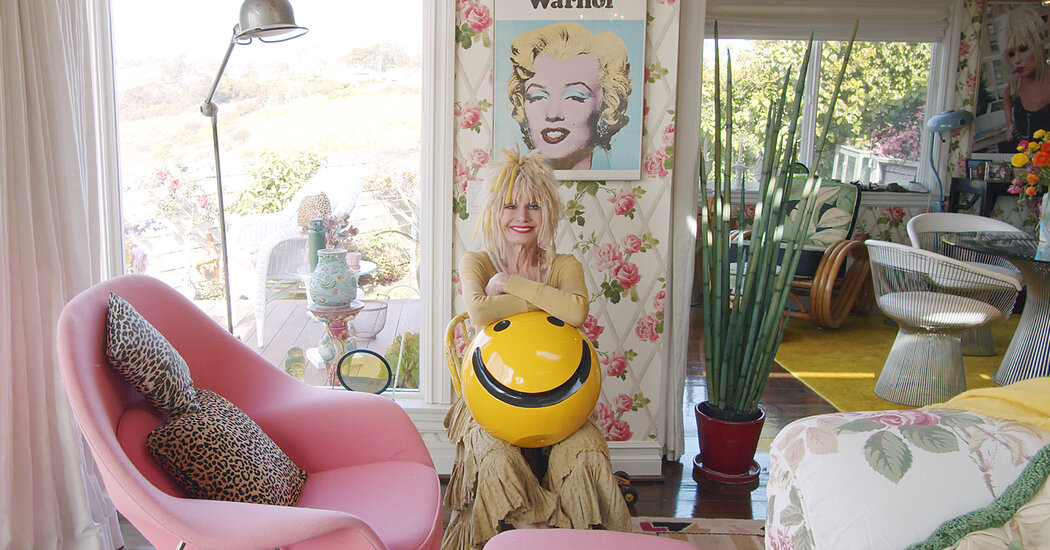 Johnson’s path to acquiring her Point Dume home started in 2016, when she moved from the East Coast with her daughter, Lulu Johnson, and two granddaughters. After a stint in a trailer, which she also painted pink, in nearby Paradise Cove, the designer bought and began renovating a 3,000-square-foot house in the same area with 360-degree views of the mountains and sea. As soon as the papers were signed, however, and especially when Covid-19 hit shortly after, Johnson developed misgivings about its size. “I thought, ‘What the hell am I doing?!’” she says. As it happened, Lulu had recently found a listing for a trailer in Point Dume — a three-bedroom, one-story colonial-style one with white interiors and exteriors — and Johnson leapt at the opportunity, selling off the house. At 2,300 square feet, the trailer is undoubtedly more modest, but Johnson also appreciates its setting. “I love the idea that, with a trailer park, you’re in a kind of community,” she says. “At my age, if I fall down in the middle of the street, I want someone to go, ‘Hey! What’s that girl doing in the middle of the street?’” Less appealing was all the white. “I realized, ‘I’ve got to create a new house for myself,’” she says, “And I decided that it was going to be a dollhouse.”

Her inspirations were the kitschy 1950s-era sets of the Netflix series “The Queen’s Gambit” (2020), which Johnson tore through during the pandemic, and the meticulously wallpapered dollhouse that her father made for her as a child — she can still picture the botanical and plaid prints. And so, Johnson set out to cover every inch of her walls. She soon discovered the California-based company Bradbury & Bradbury, which reproduces a wide variety of vintage patterns, and pored over its offerings from the 1930s and ’40s. She was delighted to find one with pink roses and latticework that was an exact match for the wallpaper in her childhood home, and hung it in her living room. After that, Johnson went all in on florals, to the extent that the interior now brings to mind an English garden (the wallpaper in the entryway is even patterned with gnomes).

That’s the prettiness. But of course it’s also a backdrop for other cherished elements, and the everlasting aesthetic conversation taking place in Johnson’s mind. She bought very few new pieces to decorate the space, instead repurposing her existing collection of art and furniture, which combines her loves of Danish and midcentury modern (a pink Eero Saarinen womb chair), Americana (Victorian-style Cathouse iron beds) and rock ’n’ roll (portraits of her and Lulu by Mick Rock). “I just think it’s what any person is,” she says of her varied tastes. “They’ve got a right side and a left side.”

The designer spends most of her time in the main room, which stretches from a sitting area — outfitted with orange Art Deco-style swivel chairs and a convex mirror that reflects the coastline — to a kitchen to a living space, where she watches TCM movies on a TV above the mantel. Opposite the fireplace is a coffee table laid with what she calls “1920s to 1950s weirdnesses” sourced from Blue Door, a vintage store in Santa Barbara, and antique shops and dealers in upstate New York: iron book ends shaped like dancing women and painted jade green, Japanese tea tins, a ceramic clown-adorned ashtray and a six-inch-tall plastic figurine of a tuxedo-clad male. “He’s the only man allowed in my house — not that I don’t love men,” Johnson explains, “I just don’t love them visually.” In another corner of the main room, a 1950s-era Warren Platner table and chairs sit under a pair of original Sputnik light fixtures — two of 13 total chandeliers in the house.