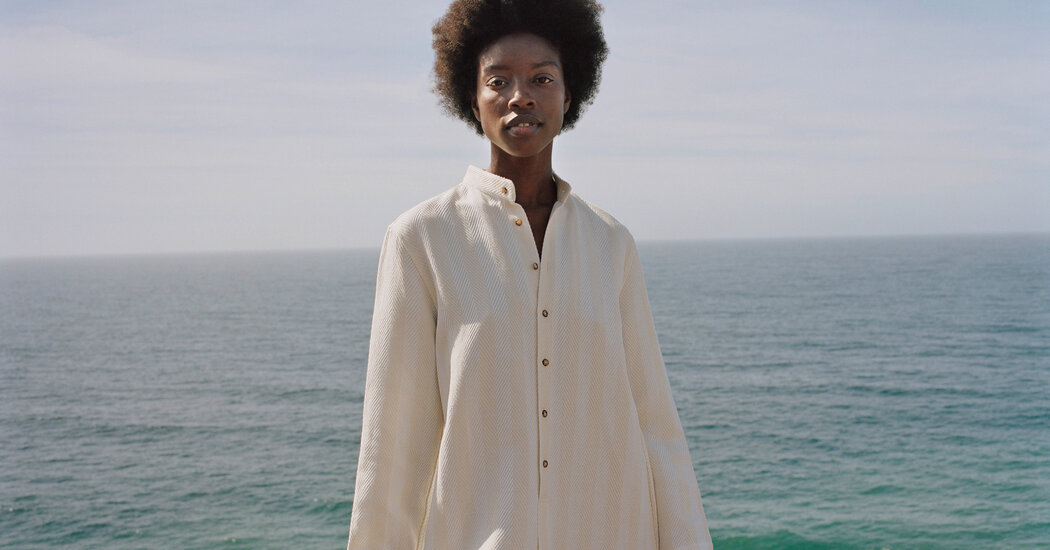 In the early years of the last century, when the August heat settled over the sweltering streets of Vienna, Gustav Klimt would head westward to the foothills of the Alps, where he’d paint slender birch trees and other tranquil landscapes, study his Japanese art books and swim in the clear waters of Attersee, one of Austria’s largest lakes. He’d paint from the lake, too, often piloting a small rowboat, oils and canvas in tow, out onto its mineral-blue surface. Immersed in nature, he’d exchange his city clothes for an ankle-length caftan — a free-flowing garment to match his unstructured days.

The artist’s idyllic Alpine summers, and particularly the lake, where he felt most relaxed and most himself, were the inspiration behind a new collection of clothing and accessories, Attersee, designed by Isabel Wilkinson Schor, T Magazine’s former digital director, and launching this week. Her hope is that the pieces will evoke what Klimt called a longing “to be gone like never before.” It’s a sentiment so many of us have felt this past year on account of pandemic-induced travel restrictions, but Wilkinson Schor’s take on escapism is more metaphorical. “Everyone has their own Attersee,” she says. “For some, it might be a European holiday or a far-flung adventure. For others, it could be embracing a friend again or throwing open the windows.”

Fittingly, the brand’s inaugural collection includes a caftan in an Italian cotton-linen herringbone blend — “not too lightweight and not too heavy,” says Wilkinson Schor, who spent months perfecting the drape, which is accented with a bit of architectural pertness at the cuffs and collar. “I can wear it from 8 a.m. to 11 p.m.,” she says, “after jumping out of the ocean, while running errands around the city, out to dinner with a cardigan over my shoulders.” Other all-day garments include a breezy pop-over top and shorts, which, along with the caftan, feature a cheerful cabana stripe in five colorways: crimson, navy and other classic hues crossed with ivory yarn for an attractively sun-faded look. A matching quilted blanket with heavy linen edging (Wilkinson Schor styled it as a tablecloth for an Attersee shoot in Malibu) and a rope belt with handmade leather end caps further complement the collection’s invitation au voyage.

It took Wilkinson Schor years to realize that she wanted to design clothes rather than just edit or write stories about them. A native New Yorker with a master’s in journalism, she began her career as a fashion and arts editor for The Daily Beast, and went on to work at New York Magazine’s The Cut and then T. Sartorially, she tended toward crisp shirtdresses for the office. “I collected them fervently,” she says. Yet even those chimerical pieces — half corporate polish, half billowy ease — didn’t feel entirely true to her sense of style or self, and, she says, a nagging question set in: “What would it look like to make clothes that I actually wanted to wear?”

Around 2017, Wilkinson Schor started sneaking off during her lunch breaks and after work to visit a sample room in Manhattan’s garment district. Her goal was to engineer the perfect shirtdress, the standards for which — a clean, collarless silhouette; straight, easy-to-roll sleeves; a roomy but not oversized body — she’d fine-tuned over her years as an avid shopper. For a long while, she thought of it as a personal project, a way to fill a gap in her wardrobe, but eventually it occurred to her that others, too, might enjoy her designs. In 2019, she left the magazine world to found Attersee.

Then came the pandemic, which threatened to put her plans, like so many others, on hold. The Italian textile mills where she’d spent months developing proprietary fabrics temporarily shuttered. On-model fittings migrated to Zoom. “Embarking on the project in relative solitude, with only a few trusted team members, was very lonely,” says Wilkinson Schor. At the same time, though, she drew from the collective desire to return to less troubled times, which sharpened her resolve to make pieces that might engender a sense of serenity and even joy. Take the line’s long linen dress, cinched at the waist and fringed at the hem for a buoyant effect when the wearer walks, or its sailor top, jauntily fastened with a faux tortoiseshell ring and finished with thin braided trim.

As Wilkinson Schor worked on the collection, a scene kept playing out in her mind. She saw her closest friends and all of their kids — in addition to the adult line, much of which is gender-neutral, versions of the pop-over top and shorts also come in children’s sizes — gathering by the waterside, maybe a lake in the Alps or maybe not, some running in and out of the water while others talked and laughed on the shore. There was a big lunch table set up under a shady tree, but nothing too precious or planned. “This is not a trip I’ve been on, or one I’m even scheduled to take,” says Wilkinson Schor. “Still, I want to carry that feeling with me.”

When Polka Dots Signal Both Optimism and Disquiet

Jennifer Aniston and J.Lo Both Wore the Denim Trend I’m Replacing Skinnies With