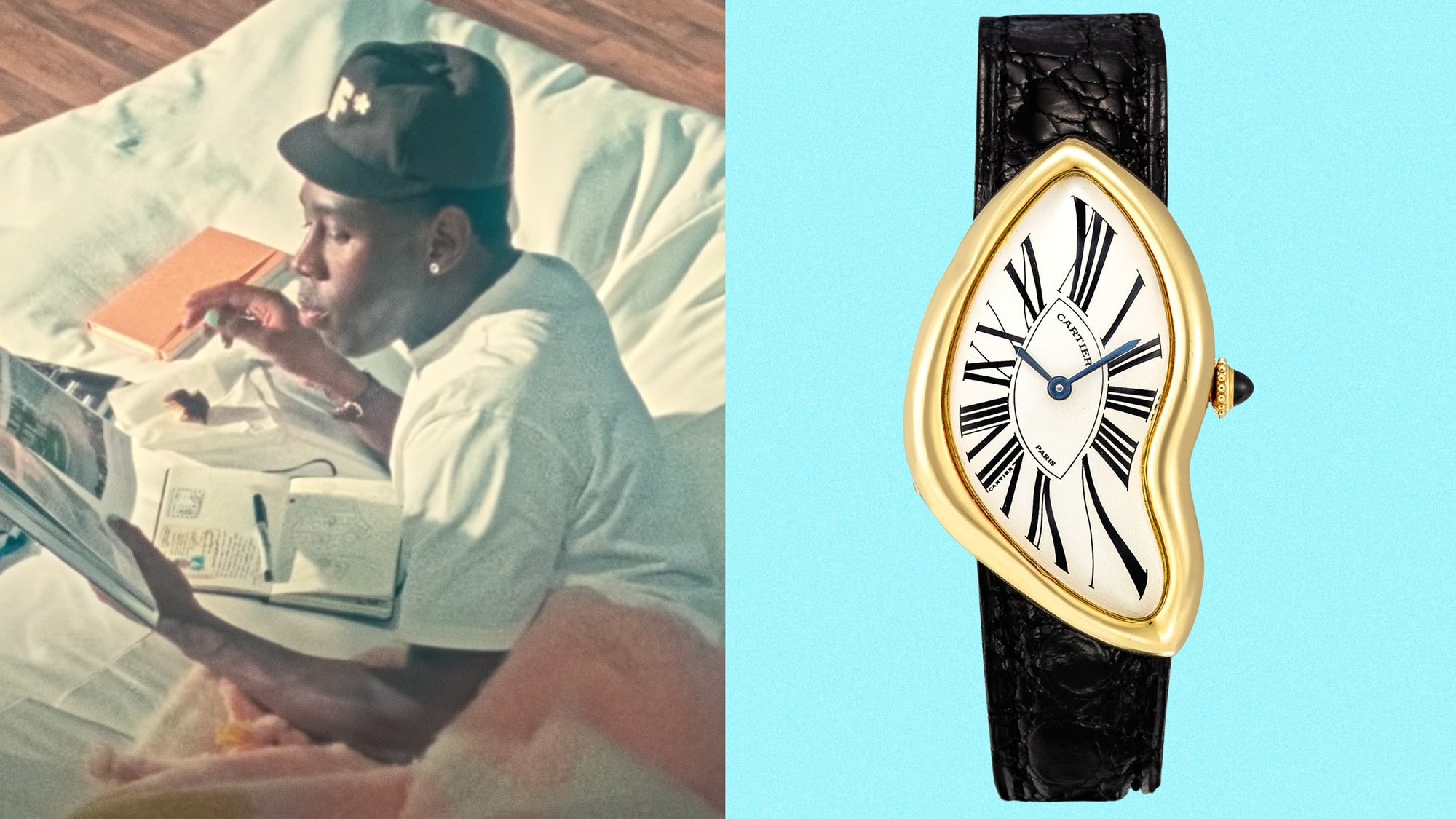 “Glow up” does no justice to the process Tyler the Creator’s watch collection has gone through over the past year. He went from a $11 Casio to a vintage Cartier Santos-Dumont…and now to one of the funkiest and most treasured designs ever, the Cartier Crash. It is a glow-up of Neville Longbottom proportions. And what a coming out party for this watch: it appears in a lingering shot in his new music video “Lumberjack,” with Tyler dressed as an older version of himself sporting a tuxedo and cane. Saucy! It’s hard to think of a better match between person and watch, too: both swerve in unexpected places, and those quick changes of direction are why they’re both beloved.

It’s a little shocking to see how fast Tyler got it when it came to watch collecting. He’s only been down the wormhole—at least publicly—since November of last year, when he first showed off that Santos-Dumont. Just a handful of months later, and he has the watch. Tyler’s collection isn’t the only thing experiencing a glow-up. In the past year alone, prices for the Crash at auction have zipped from $25,700 to $225,000. Kanye West is also a fan.

I mean, they don’t call him Ice Trae for nothing. The comeback king of the 2021 NBA playoffs has a watch to go with his nickname. This thing is cold: your standard Rolex Datejust all dressed up in a whole, uh, tray of diamonds. In the words of fellow Atlanta legend Gucci Mane: Brrr.

Waithe is wearing the beyond-classic Datejust—it’s like Trae Young’s watch, just without the fuss of the diamonds. Technically, this is a men’s watch but Waithe is knows how antiquated that type of thinking is. An increasing crowd of watch-world folks have rightfully been banging the drum: “all watches should be unisex,” Hodinkee declared earlier this year.

Tsitsipas lost in the final of the French Open—after a barnburner that felt like the real final between Novak Djokovic and Rafael Nadal a round earlier—but at least won the war of the wrists. He is just the latest celebrity to wear the panda-dial Daytona, following the likes of Blake Griffin and Giannis Antetokounmpo. The watch’s claim as the coolest Daytona grows stronger by the day.

Sheesh: okay, forget what I just said about the panda-dial’s argument for coolest Daytona. At the French Open, former tennis pro Bahrami wore this version of the watch customized by Skeleton Concept. The watch’s skeleton dial is something you rarely see on a Rolex—save for other custom jobs—and the accents are directly inspired by tennis. The brown subdials, for instance, are meant to evoke the sport’s clay courts while the movement was painted a white like a tennis racquet’s strings.