Picking a right-sized motherboard is one of the most crucial tasks while building a new PC.  The kind of motherboard you pick highly affects the performance of the PC since all sizes of motherboards come with different numbers of expansion slots and support different kinds of hardware. Hence, if you are curious about different types of motherboards, stick to this page and keep reading until the end to learn about Motherboard Sizes.

In general, there are four basic motherboard sizes that are most commonly used these days while building a new PC, the Mini-ITX, MicroATX, ATX, and EATX. So, how do they differ from each other apart from their sizes? Let’s take a quick peek:

Since you are looking around to find the best motherboard for your upcoming PC build, there are a few facts about motherboards regarding their size and form factor. You might already have that in mind whether you want to build a small PC, a standard one, or a full-tower. Depending on that, you have to pick the right size of motherboard that could fit in the chassis while still providing you with max performance.

In terms of form-factor, large-sized motherboards like an EATX or ATX have good enough room for multiple expansion slots, RAM slots, and other components. Hence, a powerful build is easy to make.

On the other hand, if you go with smaller motherboard options like a micro-ATX or mini-ITX, you will have comparatively lesser ports available for expansion cards, and that could become a limiting factor for the overall PC performance. So, to make things clear, let’s discuss each type of motherboard one by one so that you can compare them and choose one suitable for your next PC build. 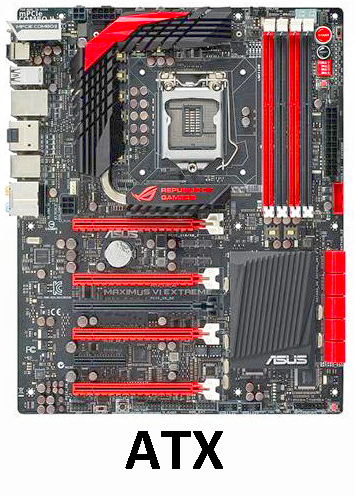 Let’s talk about the elephant in the room first; the ATX motherboards are every PC builder’s first choice to consider. Since the size of ATX motherboards is generally around 12″ x 9.6″, you can easily plan to build a full-tower or mid-tower using such motherboards. Moreover, finding a compatible ATX motherboard is comparatively easier than the other options.

Moreover, there are usually plenty of expansion slots for video cards, sound cards, SATA ports, fan headers, and other adapters. Apart from that, these motherboards provide you the best value for your money as they are so widely and commonly used. 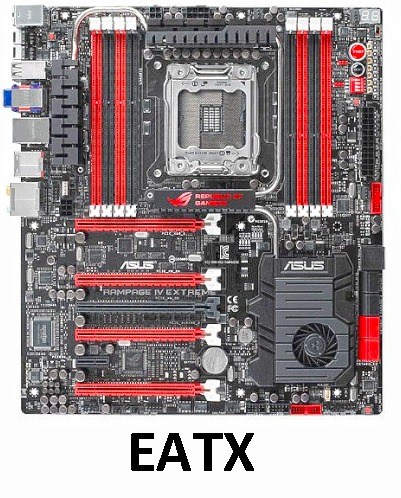 If you look for a slightly bigger motherboard than the ATX ones, there’s an extended version of such motherboards available as well. E-ATX basically stands for extended-ATX, which generally has a size of around 12″ x 13″.

The features on this kind of motherboard are fairly the same as of an ATX motherboard. But, since the size of the chassis is bigger, EATX motherboards generally have more expansion slots. You can expect an EATX motherboard to come with a few more additional heat sinks than ATX boards.

Apart from that, there can be more heat sinks as well that can help to maintain the temperature of the components. In some cases, there can be up to 8 RAM slots on an EATX motherboard and sometimes up to 2 CPU sockets as well. Having support for dual-sockets allows you to run two processors at the same time which can make your PC’s performance quite high. 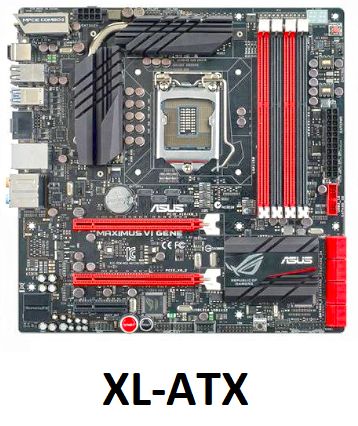 Unlike the ATX and EATX motherboards, the XL-ATX motherboards are not used quite often as it does not provide any remarkable advantages over the latter. In terms of size, these are the largest motherboards but are actually very rarely seen in the market these days.

An average XL-ATX motherboard usually has dimensions around 13″ x 10.4″. Since the majority of people are satisfied with the ATX and EATX motherboard, the need for a larger motherboard is vanishing as the hardware components are becoming more powerful and compact with time.

You can definitely use one of these in case you need multiple PCIe slots and need to build a multi-GPU setup for gaming. Apart from offering a few extra expansion slots, and RAM slots, there is no big advantage of using an XL-ATX motherboard. 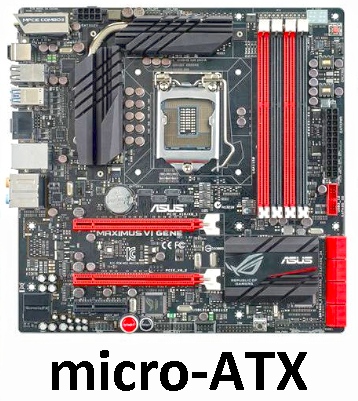 If you trim down the ATX motherboards by a few centimeters across its length and width, you get a smaller version of it. With smaller size and build, you do sometimes have to sacrifice a few slots as well.

Like an ATX motherboard, you do get to see similar specs like 4 RAM slots, but that’s the case when you are buying the high-end models. In mATX models, you also get to see motherboards with only 2 RAM slots and fewer PCIe slots as compared to other larger sizes.

Although you get most of the features and compatibility as same as the ATX motherboards, the only drawback is that you will have less room for future expansions. As of today, all the mATX motherboards out there are quite similar to ATX ones and support similar hardware components as well.

But, since the size is small and you get a few lesser ports, the pricing of these mATX motherboards is more affordable. Apart from that, the compact size of these kinds of motherboards allows you to use them even with smaller PC cases. 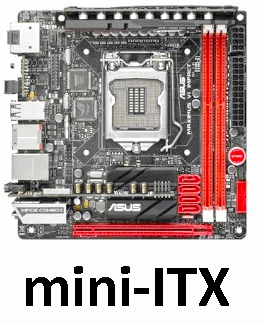 You can pretty much guess about the size of these motherboards by just looking at the name. The mini-ITX boards are actually the smallest motherboards out there on which you can use the standard-sized hardware components.

The size of these motherboards is generally around 6.7″ x 6.7″, which makes them the smallest among all, so far. That said, the availability of a larger VRM section and heatsinks are very rare.

With such a smaller form factor, you cannot expect the motherboard to have more than 2 RAM slots. Apart from that, building a multi-GPU setup using a mini-ITX is not possible either, as you don’t get more than one slot for that.

Most mini-ITX motherboards use 4 pin power connectors; hence power delivery is also not great either. Hence, overclocking dreams can never come true with such builds in most cases. However, the major benefit of using a mini-ITX is that they are cheap, and can fit easily inside a small-sized PC case.

Moving over to the next motherboard type, the nano-ITX are even smaller motherboards than the mini-ITX ones, measuring around 4.7″ x 4.7″ only. Primarily, these motherboards are designed to consume very low power.

Hence, they are pretty limited and only work with specific hardware components. That said, the nano-ITX motherboards are often used to build small computers ideal for smart entertainment purposes like PVRs, smart TVs, or automation purposes mostly.

Pico-ITX motherboards measure around 3.9″ x 3.9″ and are even smaller than the nano-ITX motherboards having even lesser slots and features. Basically, these motherboards are quite often used in devices designed for IoT and automation purposes. These boards are a great choice for such devices since the power consumption is quite low and can be implemented easily in industrial automation devices, and similar other devices.

We hope you have got a decent idea about each kind of motherboard by now. While buying a motherboard, basically, you pay for the expansion slots and other connection ports. That is why the larger-sized motherboards with more slots are expensive as compared to the smaller boards, which have fewer ports.

For your upcoming PC build, if you want to utilize multiple GPUs and want to build an extremely powerful PC, an EATX or ATX motherboard can be the best pick for you. On the other hand, if you have a limited budget or intentionally want to build a smaller PC, you can choose between mATX and mini-ITX boards as per your requirements. For any other queries related to motherboards, you can feel free to discuss them in the comments section below.