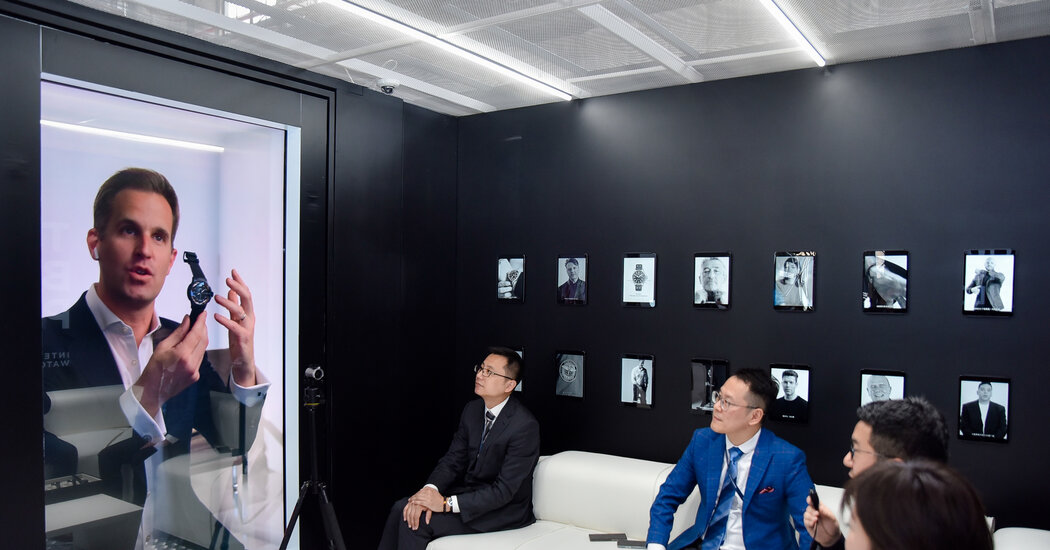 In April, Christoph Grainger-Herr, chief executive of the Swiss watch brand IWC, appeared at the Watches and Wonders luxury fair in Shanghai — but without ever leaving Switzerland.

“We got a lounge chair for me here,” Mr. Grainger-Herr said during a recent video call from IWC’s headquarters in Schaffhausen, “and a lounge chair for clients in Shanghai, and we both sat at eye level with each other, having a conversation.”

While the visitors he interacted with were at the Shanghai event in person, Mr. Grainger-Herr opted for the next best thing: He attended as a hologram.

“It’s remarkably different from a Zoom call,” he added, “because you’re full-body, head to toe — and everybody is wearing pants.”

The technology that enabled Mr. Grainger-Herr to materialize in Shanghai as a life-size, 4k-resolution, three-dimensional entity — in real time — belongs to the company Portl. Using its proprietary software, people can beam themselves to more than 100 of its Epic machines, at locations around the world, including Abu Dhabi, Barcelona and Miami.

Holoportation has existed, in one form or another, since the 1860s, when the English scientist John Henry Pepper popularized Pepper’s Ghost, an optical illusion favored by theatrical productions. (It relies on angled glass to reflect an image to the audience.) In 2012, a version of that technology appeared to resurrect Tupac Shakur from the dead for a performance, of sorts, at the Coachella Valley Music and Arts festival in California.

“No technicians are needed on either side,” he said during a recent interview at Portl’s headquarters in the Echo Park neighborhood of Los Angeles. “It’s a single backdrop, a single audio source, a single light source and a single camera — you only need four main pieces of production equipment.”

(The Epic devices also enable hologram users like Mr. Grainger-Herr to have a close-up view of the distant people with whom they’re interacting.)

Mr. Nussbaum is convinced that holograms are the future of retail, travel and communications. (“You can’t be there, beam there,” he said.) Until the technology gains wider acceptance, however, he promises one thing: “When a hologram shows up somewhere, so do massive audiences and their social media.”

For Mr. Grainger-Herr, holoportation is promising for several reasons: Not only does it help personalize an interaction between the brand and its prospective customers, but it also helps IWC expand its retail relationships without the logistical complications associated with physical presence.

“It gives me much more flexibility,” he said, “especially in China, where I can go to cities where we haven’t got a store network yet.”

“Imagine a prerecorded hologram presentation,” he added. “Then you scan a QR code, or hit a button, and you’re speaking to one of our ambassadors in a much more realistic way.”

There’s just one hiccup. “You try to walk over to somebody and shake hands,” Mr. Grainger-Herr said. “And then you realize it doesn’t quite work like that yet.”

30 Random Under-$300 Finds I Can Vouch Are Ridiculously Cute

Omega Returns to the Olympics