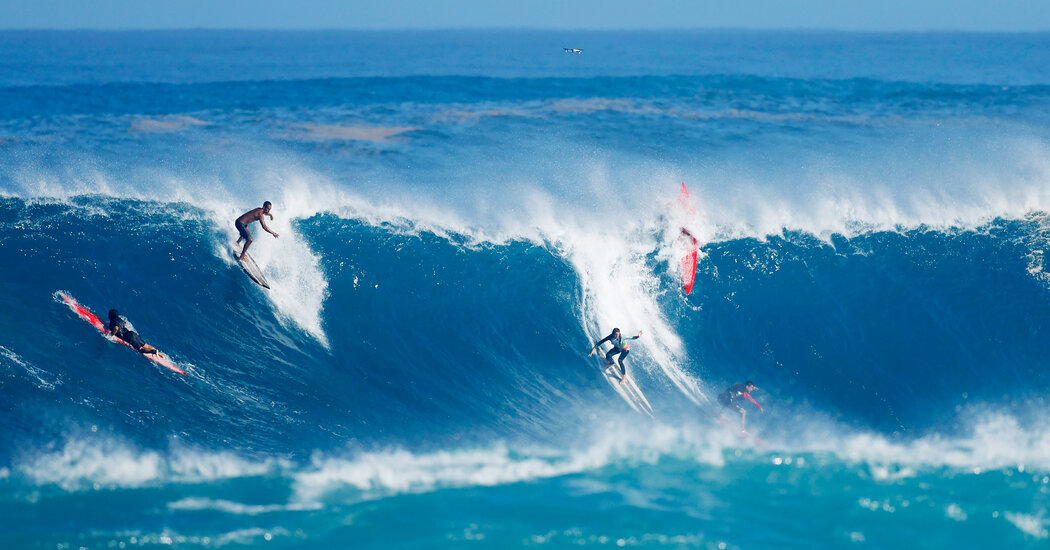 Although watch houses and surf companies like Rip Curl, Freestyle and Casio have sold simple waterproof timepieces that monitor sunrises, sunsets and tides for years, the lifestyle and technology brands Nixon and Garmin released two surf watches this spring that are workhorses and oceanic encyclopedias for the wrist.

With an 8-millimeter stainless-steel case, the Heat, which costs $150, was released in April and is Nixon’s most slender surf watch.

“This watch was about problem solving,” said Joe Babcock, Nixon’s director of product design. “We wanted it as thin as possible — it’s 7 millimeters slimmer than Nixon’s last technical surf watch — without sacrificing what’s most important to surfers: a timepiece that can take a set on the head thanks to the case that acts like a roll cage on a 4-by-4 truck, protecting the watch from a beating in the ocean but with an intuitive user interface.”

The custom digital liquid crystal display module includes a chronograph and preset timers with a final countdown clock known as a 60-second “send” notification, “so you can send it on your last wave in or out of competition,” Mr. Babcock said, referring to paddling for and surfing a wave with determination.

The High Tide ($220), a larger Nixon watch with features including 550 preprogrammed locations with tide, sun and moon data, was released in November. In addition to being the first Nixon watch made from recycled ocean plastics, the High Tide is also Nixon’s only watch to use the higher-contrast, higher-resolution MLCD technology in the display.

“We know who our customer is, we are part of their tribe,” said Mr. Babcock, “and we made these watches for occasions and to create emotions. Our focus is to serve a specific vacancy in our consumer’s lives.”

Cindy Good, 67, a former pharmacy shift supervisor, has been surfing the Garden City, S.C., beach for 19 years and says she absolutely relies on one of her five Nixon watches to deliver tidal information for her local surf break.

“I bought my first Nixon 20 years ago and have had one on my wrist ever since,” Ms. Good said. Her current favorite is a bright orange Base Tide, an older version of the Base Tide Pro ($150). In addition to checking the tides daily, Ms. Good is preparing for a surf contest in July and plans to use the countdown timer and alarms to train for her 15-minute heat.

Known primarily as a surf forecaster, Surfline operates live high-definition cameras at over 700 beaches worldwide. For its premium subscribers, the Huntington Beach, Calif.-based company also offers Surfline Sessions, which creates a video of waves ridden in front of a Surfline camera.

For Garmin of Olathe, Kan., the idea of creating a watch specifically aimed at each aspect of surfing, including tracking wave count and surf time, and forming a partnership with Surfline Sessions, felt a little foreign. “It’s hard to develop surfing technology in the middle of Kansas,” said Audra Ratliff, the product marketing manager for Garmin, “but surfing stood out. It’s new metrics for us, a new algorithm, but we wanted to show commitment to that market.”

Beginning in late 2018, Garmin began creating an activity profile for surfing, introducing its first surf-capable watches in summer 2020 with the Instinct Solar Surf Edition ($375) and the Fenix 6 ($450). In May, the Descent Mk2S ($1,000) debuted with surf features and optical heart rate and all-day respiration.

“We had to develop the surfing activity profile from scratch,” Ms. Ratliff said. “We had over 30 sports apps, but nothing that enabled wave counting or that kind of movement,” she said, adding, “but it’s a significant activity that our customers kept recording, so we decided to go for it.”

Julia Parish, 42, an invasive-species biologist and San Diego surfer, says the Garmin Instinct Solar Surf lives on her arm. She previously owned a Rip Curl surf watch and will occasionally wear her Nixon Siren “as a dress-up watch that I can take surfing.”

But it is the Instinct that “is my total favorite,” she said. “I’m super pumped about the surf tracking, it’s one of the key factors as to why I got this model. Plus, I can charge it using the sun, and it’s got the moon phases, which is really helpful with tide information.”

Some companies, like Dawn Patrol, opted to skip the hardware and logistics of building a watch and instead dove directly into software development. Using the Apple Watch (from $399) as its timepiece, Anton Bremer of Cornwall, England, Dawn Patrol’s chief executive and founder, began designing “Strava for surfing” in 2016, he said, referring to the exercise app.

“It documents every single piece of data from your surf,” he said. “Our users talk about it as an improvement and training tool. Shortboarders are focusing on trying to get their speed to a certain level, for example, plus there’s wave analysis and replay,” because of Dawn Patrol’s partnership with Surfline Sessions.

“An app is a bit like a house; it’s never finished,” Mr. Bremer said. “We’re always improving. For example, the most requested feature at this point is distance paddled and paddle strokes, so we’re working on that.”

Dawn Patrol’s 50,000 active users are from 138 countries, he said, including Jessica Wendland of Los Angeles, who downloaded the app two months ago. Ms. Wendland, 33, a hair stylist, has been surfing since age 11 and initially downloaded the app to track her calories per session.

“There’s many features and so much cool stuff I can do,” she said. “I count my waves and look at my speed, and if I party wave with someone, I will absolutely log into Surfline Sessions and watch the replay. Sometimes when I’m surfing, I’ll say to myself, ‘You should paddle faster right now, maybe burn more calories and surf harder.’”

Mr. Bremer would be pleased to hear that. “This is an app built for surfers by surfers to use as a way to keep improving and pushing our surfing,” he said.