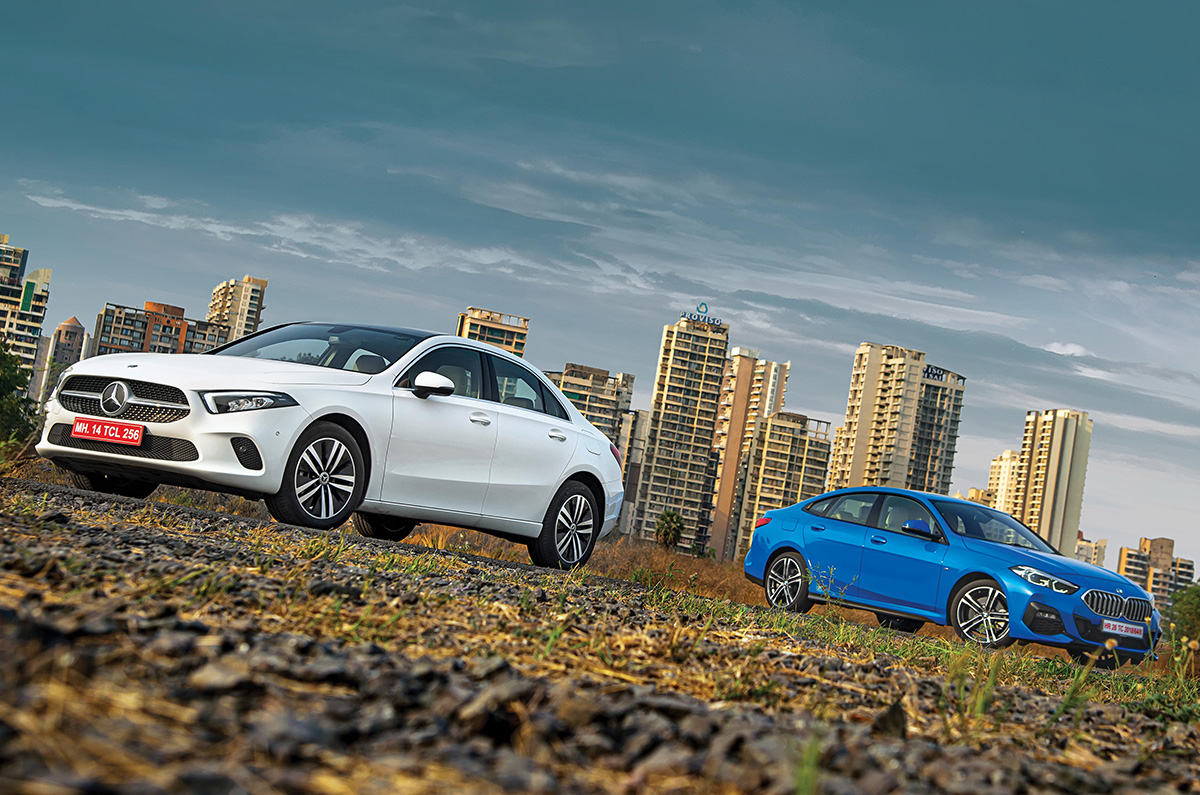 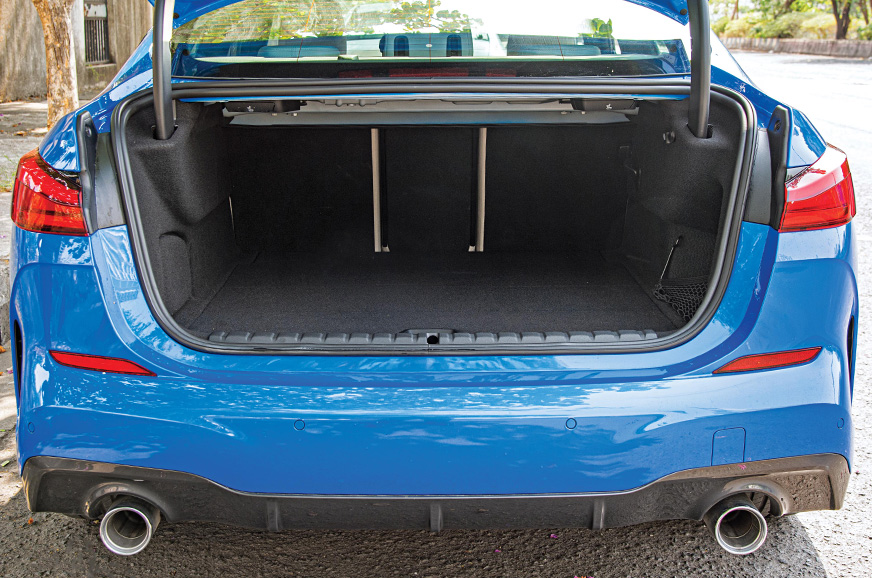 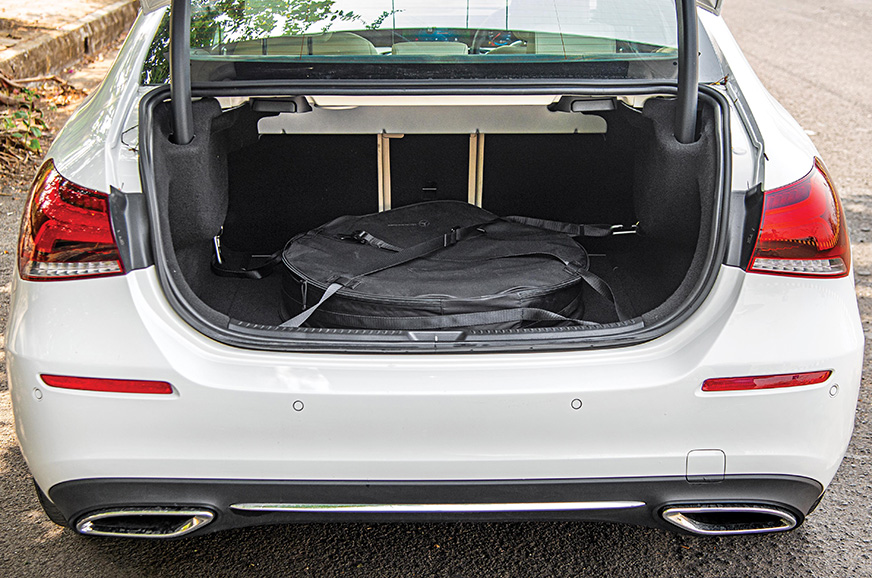 The title flight for the best compact luxury sedan in India has taken off in earnest once again. Earlier fought between the slinky Mercedes CLA and Audi’s fun A3, the contest today takes place between two old foes, BMW and Mercedes. In the blue corner is BMW’s sharp-cut and swoopy 2 Series Gran Coupé. Taking up the challenge in the white corner, wearing a three-pointed star proudly across the grille, Mercedes’ new A-Class Limousine. While both Bavarian and Swabian cars are similar in terms of size, basic spec, equipment and price, they are, importantly, also very different. 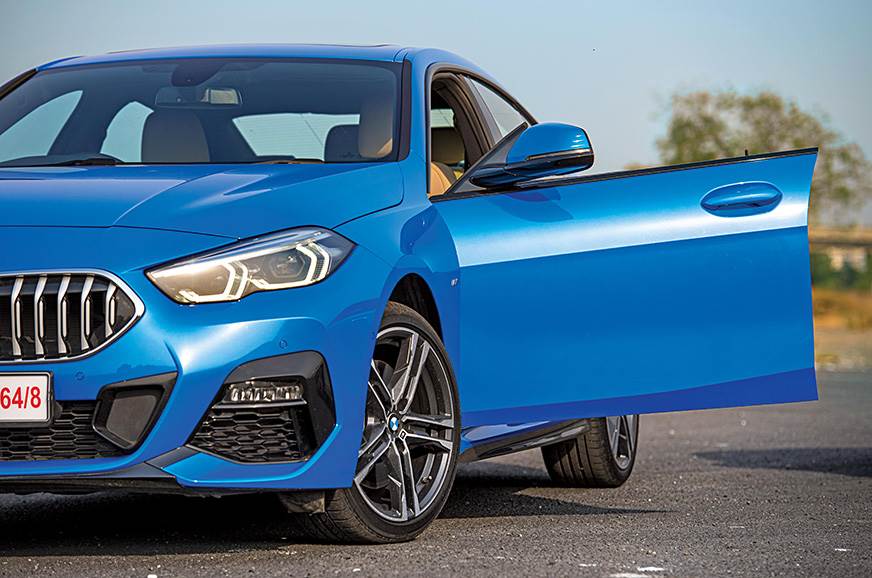 The BMW clearly has the more aggressive styling. The angry eyes and toothy grille have the desired effect, the proliferation of cuts and creases help it stand out and, whichever angle you look at it from, it certainly gets your attention. I particularly like those L-shaped tail-lights and how they work with the boot. The A-Class Limousine also has a low roof and some of that coupé-like look is still there, but it’s less extreme than the old CLA, and it’s all the better for it. The cleaned-up lines have a nice flow, the CLS-like nose works well and it comes across as the more handsome of the two. The BMW draws more attention to itself, sure, but it’s the Merc that will probably work better for most.

What Do You Think?

So what are they like to drive and to sit in? And, importantly, which is better – the swoopy BMW 2 Series or the slightly more relaxed and sophisticated Mercedes A-Class?

Since these cars are targeted at owner-drivers, let’s get straight behind the wheel; the Mercedes first, and immediately things get interesting. It seems to be at a clear disadvantage on paper – the engine makes a mere 150hp, down 40hp on the 2 Series. Despite this, the performance actually feels energetic, power delivery is quick and it even surges forward in a rather relentless manner when you put your foot down, gears tossed to you in quick succession.

The impressive new 8-speed dual-clutch transmission isn’t just quick on the draw, it is also intuitive and reacts faithfully every time you flex your right foot. It does feel a bit too aggressive in Sport at times, and it sometimes hesitates at low speeds, but on the flipside, it also rev matches when you downshift, offering superior engine braking while decelerating.

The idle, however, is a bit rough and you can feel some vibrations in the cabin. The engine does smoothen up once on the move and it cruises silently too, but that’s only until about 3,500rpm, after which you can hear a diesel drone in the background. 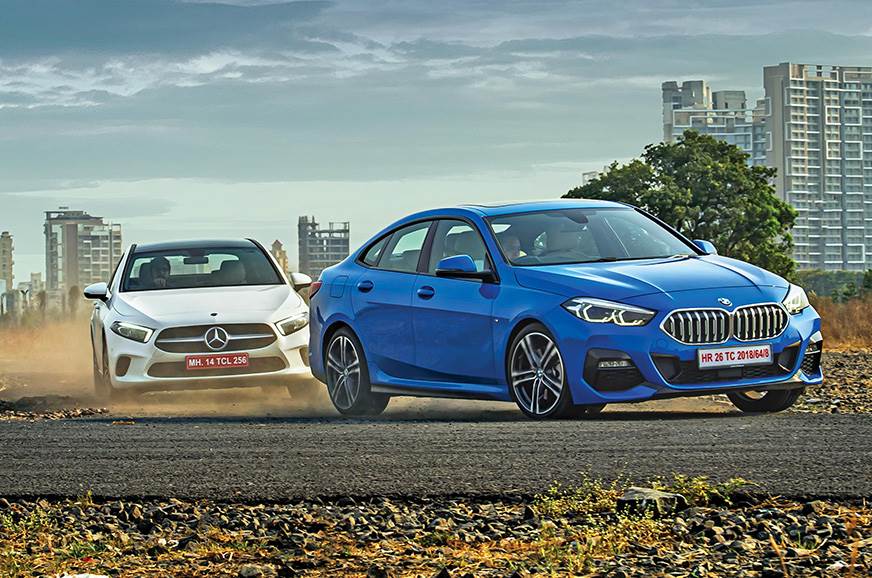 There are no vibrations to speak of in the BMW 220d, but it is a bit clattery, and as the revs climb, it gets more vocal. Cabin insulation isn’t as good as in the Merc either, and more road and engine noise comes through. Interestingly, the more powerful BMW diesel isn’t as responsive as the Merc’s, and the thrust feels pretty linear, with no oomphy mid-range spike, and this masks the extra horses to some extent. Once the power starts flowing, there’s a nice shove in your back and a rapid climb in speed.

Where you might feel all of the BMW’s 190 horses, and not in the best way, is if you launch it hard from a standstill, as it will struggle for traction and spin its front wheels up. The Mercedes puts its power down far cleaner, and while BMW’s 8-speed torque-converter auto is smoother and relatively fast acting, it isn’t as quick as the Merc’s, and that makes you reach for the paddles more often.

The bigger surprise is that these sensations translate to the performance charts, and up against our testing gear, the two are quite evenly matched. This is despite the A-Class’ significantly lower power- and torque-to-weight ratios of 95.5hp per tonne and 203.8Nm per tonne, respectively, compared to the BMW’s 119.4hp per tonne and 251.4Nm per tonne. In a drag race, the 2 Series is just 0.27sec quicker to 100kph, and it’s only at higher three-digit speeds where the BMW’s power advantage really comes into play, with the gap increasing to 3.20sec at 180kph. Acceleration through the gears, from 20-80kph and 40-100kph, show similar results, with the BMW being quicker by 0.29sec and 0.52sec, respectively.

BMW’s first front-wheel-drive sedan is based on the UKL2 platform shared with Group company Mini. As a result, the 2 Series feels playful from behind the wheel, there’s considerably more grip and it feels a lot sharper in the corners. Even the steering is more direct and has a nice heft to it. The heavier steering, however, means it isn’t as light and easy to drive at low speeds as the Merc, and because it has stiffer suspension, low-profile tyres and larger 18-inch wheels, the ride isn’t as plush. In fact, on a poor surface, you’ll feel a lot more of the road, and the 2 Series also has a tendency to tramline. 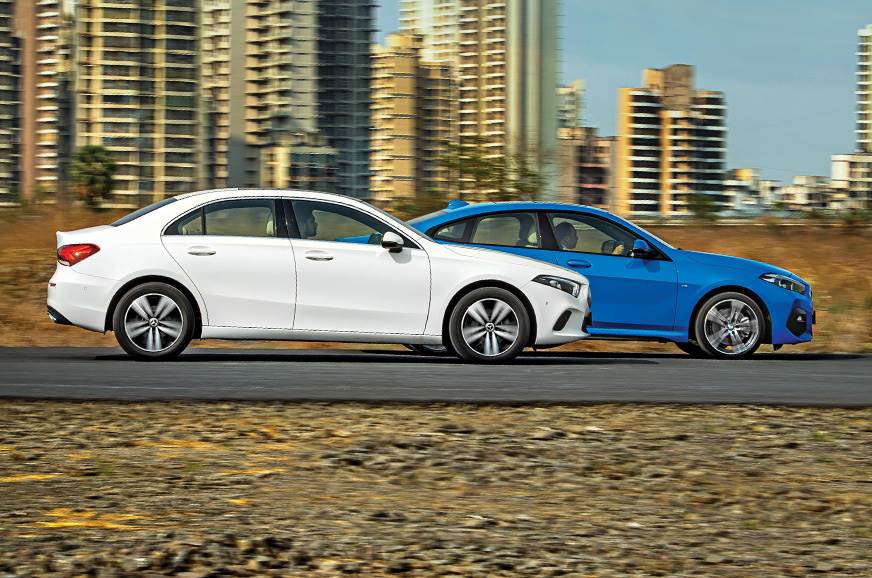 The A-Class drives like a more expensive car and has far more absorbent ride quality.

Thanks to Merc’s new MFA2 platform, the A-Class drives with a heightened sense of confidence. Straightline stability is good, it feels as secure at speed as some of Merc’s larger sedans and the chassis even feels reasonably agile. It isn’t particularly engaging, however. Due to its inert steering, it rolls a bit in corners and doesn’t have the BMW’s limpet-like grip either.

Instead, comfort is one of the A-Class Limousine’s strengths, and this is down, in part, to the well setup suspension that feels absorbent at all times, with no unnecessary movements or road shocks filtering into the cabin. 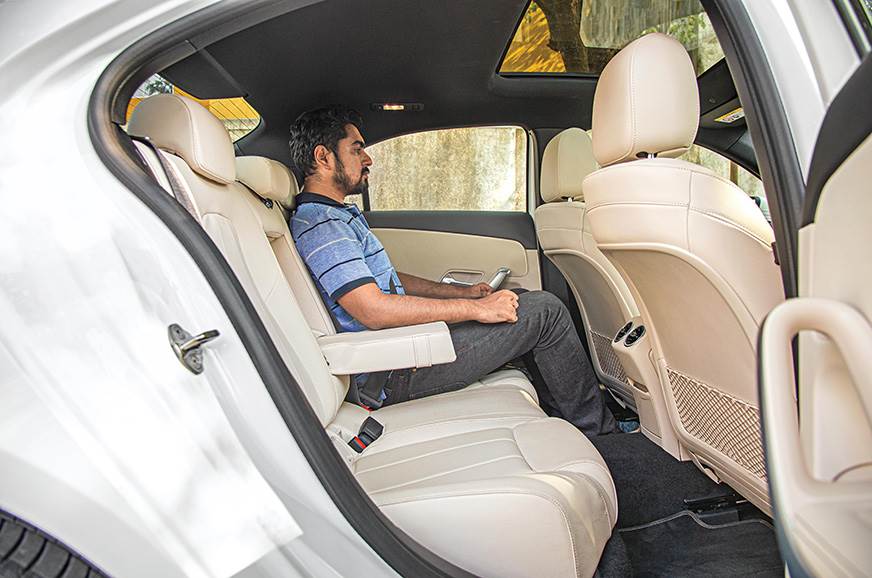 Merc’s low-set seat could have been comfier, although space is ample.

It’s hard not to be impressed with the A-Class sedan’s cabin. The tasteful blend of wood, gloss black and matte silver, garnished with the ambient lighting, is superbly executed, and the turbine-inspired rotary air vents and metallic climate control switches feel extremely high quality. Your eyes tend to gravitate towards the twin 10.25- inch screens; the single-binnacle design is so seamlessly executed, it alone lifts the cabin’s appeal. The front seats are wide and offer ample adjustment, and since the wheelbase is 59mm longer than the BMW’s, there is more space in the rear. 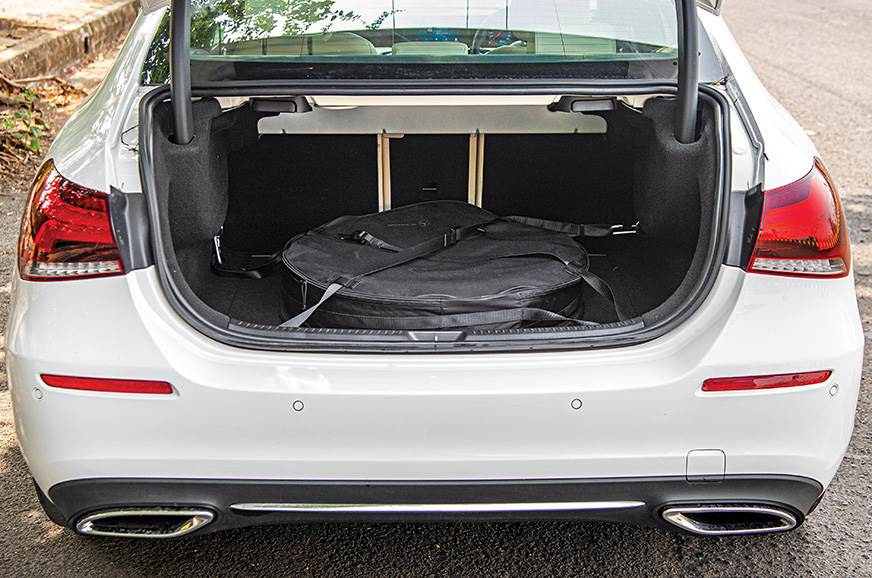 395-litre boot is smaller and its loading area is narrower in comparison.

In fact, there’s so much headroom and legroom, even six-footers will be able to sit here without any contortion. Comfort, however, could have been better, as the seat is placed low, resulting in a knees-up posture. 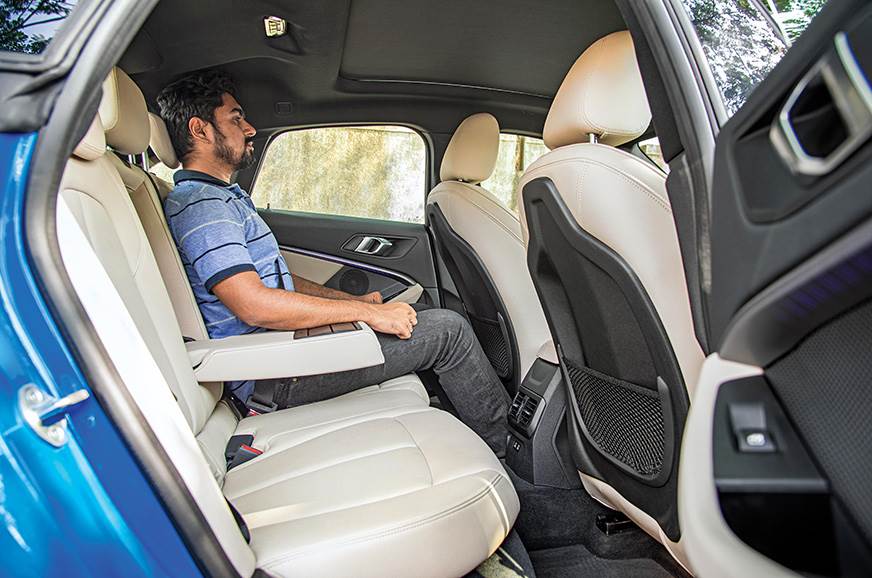 What the BMW lacks in outright space, it partly makes up in seat comfort.

BMW’s chic frameless windows make a great impression and add a sense of occasion each time you open the doors. The interior design is neat and similar to other BMW models, and quality and finish are very good as well. While there’s not much to fault, BMW’s sportier cabin doesn’t feel quite as upmarket as Merc’s overtly luxurious one. BMW’s M Sport front seats are comfier though, and get adjustable side bolstering that holds you in place when you’re attacking corners; and the steering feels meatier to grip. Step into the rear seat, and while the bench itself is better cushioned, more supportive and placed a bit higher, space is at a premium here. Headroom is tight and knee-room is limited, and the only saving grace is the larger sunroof that extends further behind than the one in the A-Class, so it floods the rear of the cabin with light. 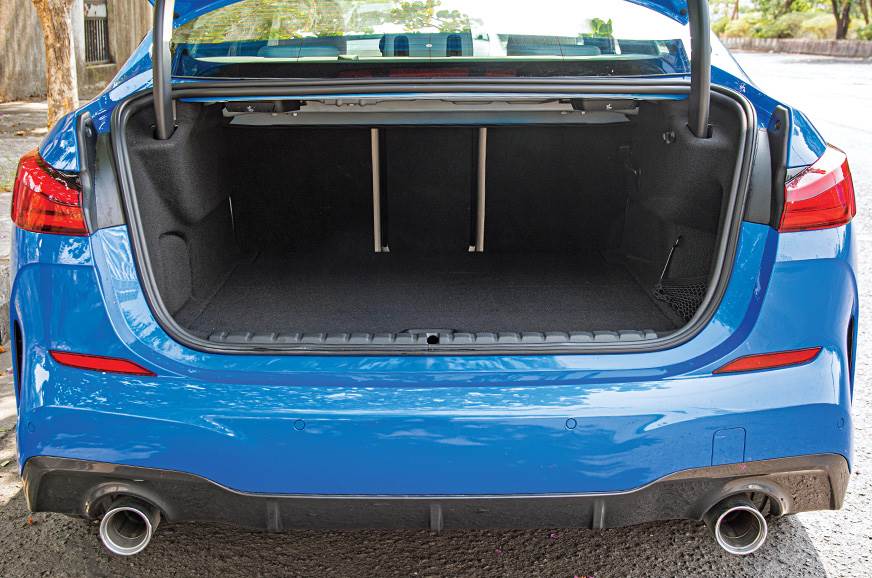 At 430 litres, its cargo volume is greater, and loading area is wider too. 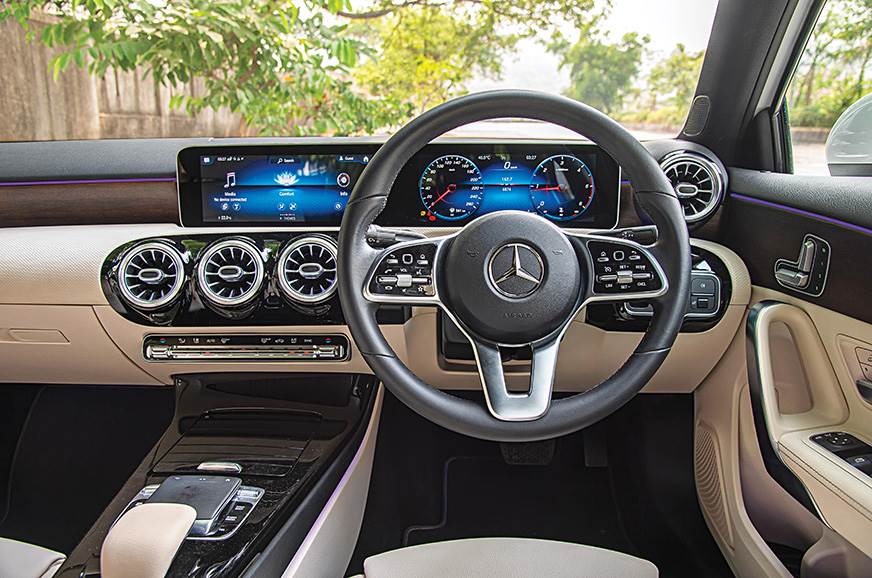 High-quality, classy interior is as plush as more expensive Mercs. 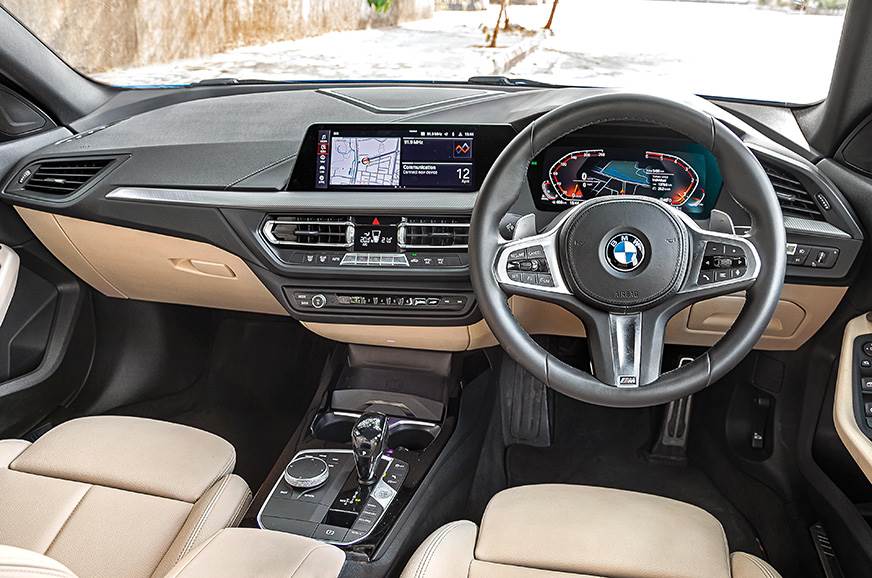 Even though quality, fit and finish are top-notch, the BMW’s cabin doesn’t feel as special.

Winner Takes It All

The BMW 2 Series Gran Coupé is the better driver’s car. Performance is marginally stronger, it enjoys being driven at speed, and the harder you push it, the nicer it feels from behind the wheel. The front seats are comfortable and it is well equipped. The baby BMW, however, doesn’t feel very special on the inside, the ride is a bit stiff and crashy, it isn’t as refined as the Merc and there’s less space in the rear. 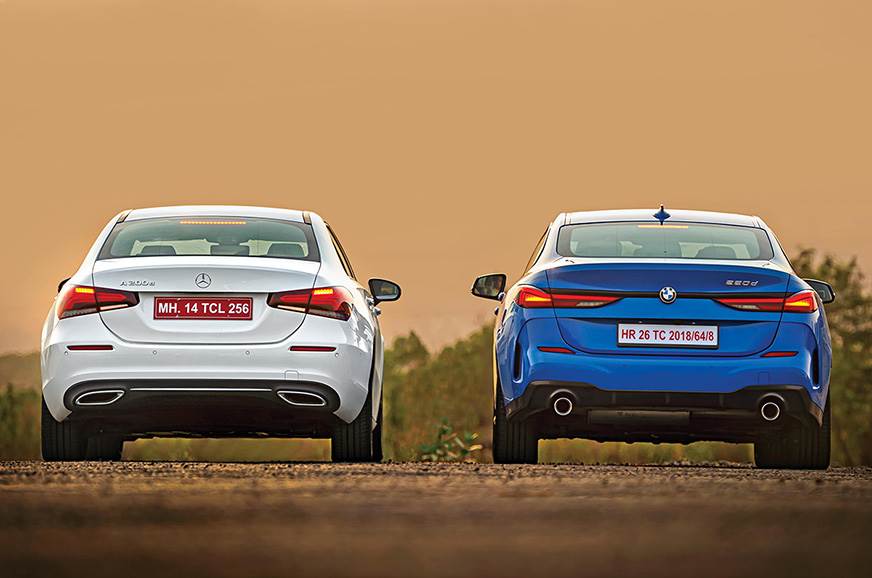 The Mercedes doesn’t quite drive with the verve and confidence of the BMW, but what the A-Class Limousine does, and quite easily, is trump the BMW at every other important metric. The interiors are more upmarket and sophisticated, there’s more space in the back, the responsive engine and gearbox work superbly together, it rides like a big Merc and the light steering and controls make it a breeze to drive in the city. As a package then, the A-Class easily comes across as more capable and better rounded; and that, in a nutshell, is why it wins.