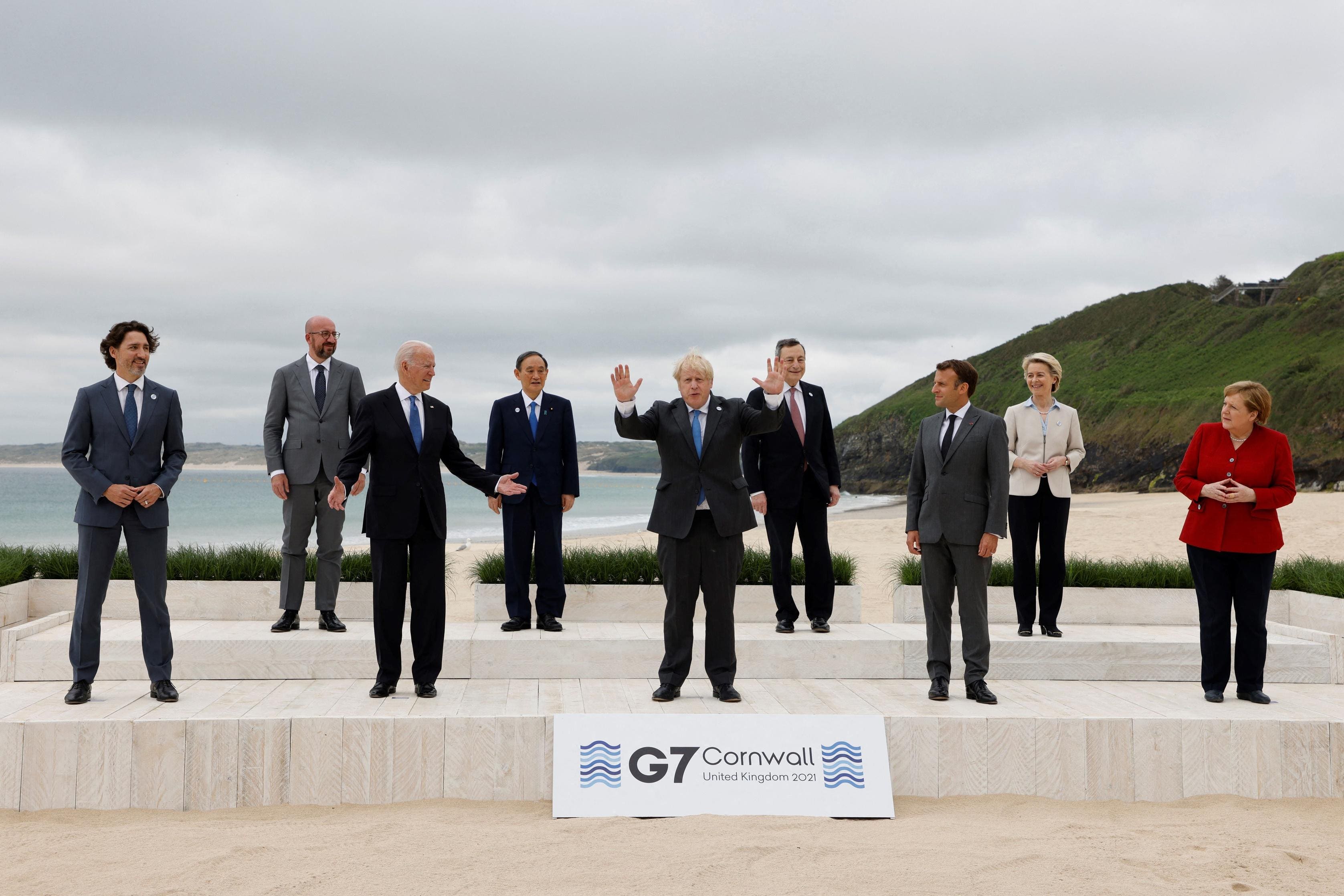 Prior to Friday, few would have ever suggested that the leaders of the Group of Seven (G7) actually had any “super powers” – even though all have the capability to ruin economies and potentially even destroy the world with advanced weapons. Fortunately, the purpose of the G7 – the inter-governmental political forum that consists of Canada, France, Germany, Italy, Japan, the United Kingdom and the United States – is to use their collective power (and not to mention wealth) for good, at least in theory.

The G7 leaders met this year at the Cornish resort of Carbis Bay Hotel, which served as a way for the host nation to show off the UK’s green technology sector.

Due to Covid-19 restrictions the leaders were carefully “socially distanced” as they stood on a bi-level platform – and it didn’t take long for many on social media to compare the leaders to action figures.

That included comedian and CBS Late Show host Stephen Colbert (@StephenAtHome) who posted, “Before I order these figures, does anyone know if you can take them out and play with them or are they glued to the display stand?”

Colbert’s tweet was liked nearly 50,000 times by Saturday morning, and he was far from the only one to note that the leaders did resemble collectible figures on a stand – notably the 1978 Star Wars mail away display stand.

That image was humorously mocked on Twitter on Friday evening and Saturday morning.

John Elwood, writer for the SCOTUSblog, quipped, “I’m glad I paid extra for the display stand for my G7 action figures.”

User @Tyrangiel was among those to note, “The female G7 action figures got bendy arms!”

A news story from The Inquisitor Nashville took the image to the next level and showed the G7 leaders alongside actual action figures on a shelf.

“Pre-orders on Amazon were sold out within minutes, and Target’s G7 toys page crashed due to high traffic,” the faux news story noted, adding, “Along with the 9-figure set, toy manufacturers are working on a cross-platform video game, YA book series, and an animated feature to be released on Paramount+.” @ZenMasterGuy shared the photo from the humor website and stated, “Mine aren’t leaving the box!”

@davejorgenson was among those who didn’t exactly see action figures, and instead suggested that the leaders were ready for an Electronic Arts’ video game, “Your Sims waiting to enter the new house you spent hours on.”

Moreover, another photo from the G7 – which included Queen Elizabeth II of the UK – also made the rounds on Twitter. @MBEngMike wrote, “Just when I think I’ve collected all the G7 action figures, they make a limited edition Her Majesty figure.”

Even as many poked fun, it is still worth noting the great power that these leaders have – even if it isn’t of the super hero or action star variety.

“As crazy as it sounds, the leaders of the U.S., France and Great Britain—all nuclear powers—individually are far more powerful than an superhero ever thought up,” said Harry Kazianis, senior director at the Center for the National Interest.

“With just one order, each leader could order a devastating nuclear strike that could kill billions of people in perhaps minutes,” added Karianis. “If Russia or China were the target, that means a devastating counter strike where billions of more could die. Simply put: Joe Biden or Boris Johnson could literally order the end of the world with what amounts to an order. Thanos would be jealous for sure.”