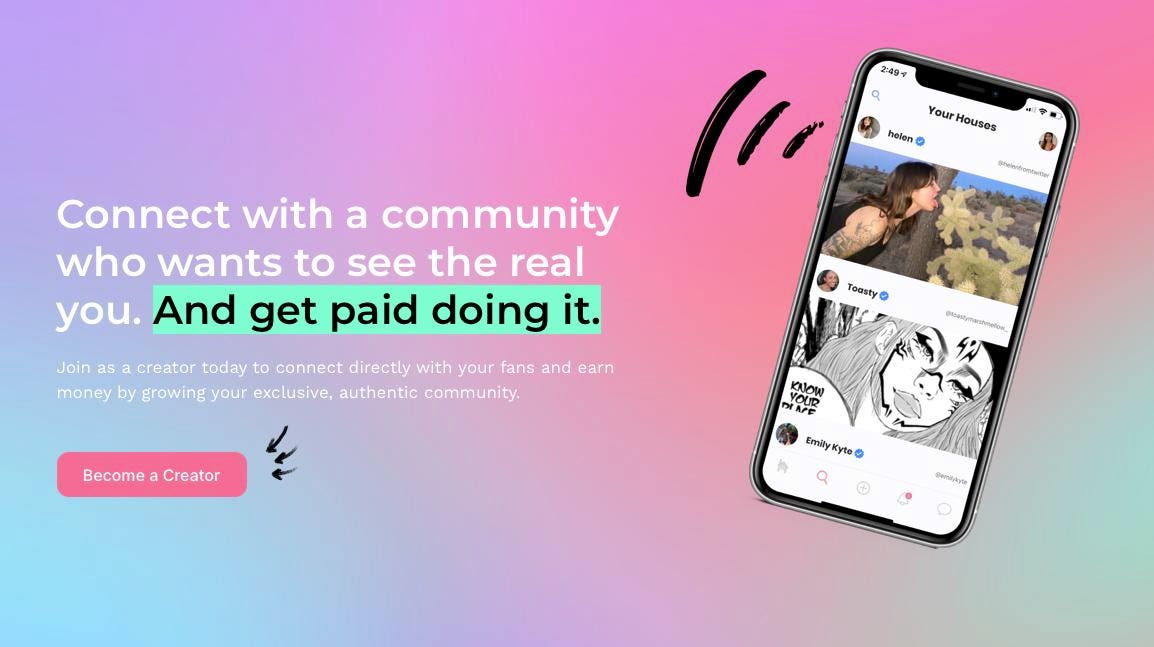 To Apple, buying 25 gems in Random Hypercasual Game #13 to beat a level faster is exactly the same thing as buying a brief one-on-one with your favorite social media personality.

And therein lies the problem.

Fresh from its still-not-settled lawsuit with the billion-dollar gaming conglomerate Epic, Apple is taking on tiny creator economy startup Fanhouse. Fanhouse — which is basically OnlyFans minus the nudity, according to The Verge — helps influencers make a few bucks by connecting with their fans. According to co-founder Jasmine Rice, we’re not talking millions of dollars: it’s rent money, meal money, medical expenses money.

But much of that revenue gets processed via their iPhone app, and Apple wants its 30% cut.

Unfortunately, since Fanhouse pays creators 90% of what their fans contribute and keeps only 10%, a 30% cut would come straight from individuals.

“I cofounded @fanhouseapp 8 months ago to empower creators to monetize their content,” Rice posted on Twitter hours ago. “We pay creators 90% of earnings. Now, Apple is threatening to remove Fanhouse from the app store unless we give them 30% of creator earnings. This is theft and exploitation.”

The problems extend beyond the percentages.

A virtual good can be sold billions of time at almost no marginal cost. The gems I just mentioned, for instance, are only combinations of 1s and 0s in a server somewhere. They are purely digital: copiable, transferable, changeable. Any time they’re sold, it’s 100% cash flow to the app. So a 30% cut to Apple is not very harsh.

That’s also true, to an extent, with a magazine, a song, a newspaper.

A service like Fanhouse, on the other hand, takes significant time to create and deliver each and every time it’s delivered. A private one-on-one with a fan can’t be replicated a billion times: it has to actually occur a billion times for revenue to be paid that often.

Apple’s pricing structure doesn’t only not recognize marketplace apps, which enable transactions between two or more other parties and which need to pay the selling party before it starts to make any revenue. It also doesn’t recognize or distinguish between different types of in-app purchases.

“If you want to unlock features or functionality within your app, (by way of example: subscriptions, in-game currencies, game levels, access to premium content, or unlocking a full version), you must use in-app purchase.”

Some apps, such as reader apps for content, multiplatform services, enterprise services, apps that sell physical products outside the app, or person-to-person services can use alternative payment methods, according to Apple:

“If your app enables the purchase of real-time person-to-person services between two individuals (for example tutoring students, medical consultations, real estate tours, or fitness training), you may use purchase methods other than in-app purchase to collect those payments. One-to-few and one-to-many real-time services must use in-app purchase.”

Fanhouse clearly offers person-to-person services, so it could send buyers outside of the app to purchase them. Of course, that would require building a separate store, creating server functionality to tell the app what has been bought, and managing customer financial data.

Most importantly, it would make the purchase path hard for customers, who would have to leave the app and enter credit card details in a website.

In all likelihood, that would destroy the ability of Fanhouse to operate. And, it’s not clear according to Apple’s guidelines that Fanhouse could tell people inside the app how to pay. Or whether Fanhouse could provide a link in the app to payment processing outside the app.

On the one hand, it’s not hard to believe that Apple deserves something as the platform owner and payment processor. On the other hand, you buy things every week on your desktop computer without some of that purchase price going to Microsoft or Apple just because you used a MacBook or a Surface Pro to visit a website and make a purchase.

Why should a phone — the most personal of all computers — be different?

Apple’s argument will be that it is not. Use the web browser and do whatever you want, Apple will say. But on the App Store, use our payment services and pay the piper.

Increasingly, it looks like this will be an untenable position for Apple.

At the least, Apple needs to get much more granular about what kinds of services are being provide, or which products are being sold. And if Apple won’t make changes voluntarily, some government somewhere is likely to force the company to.