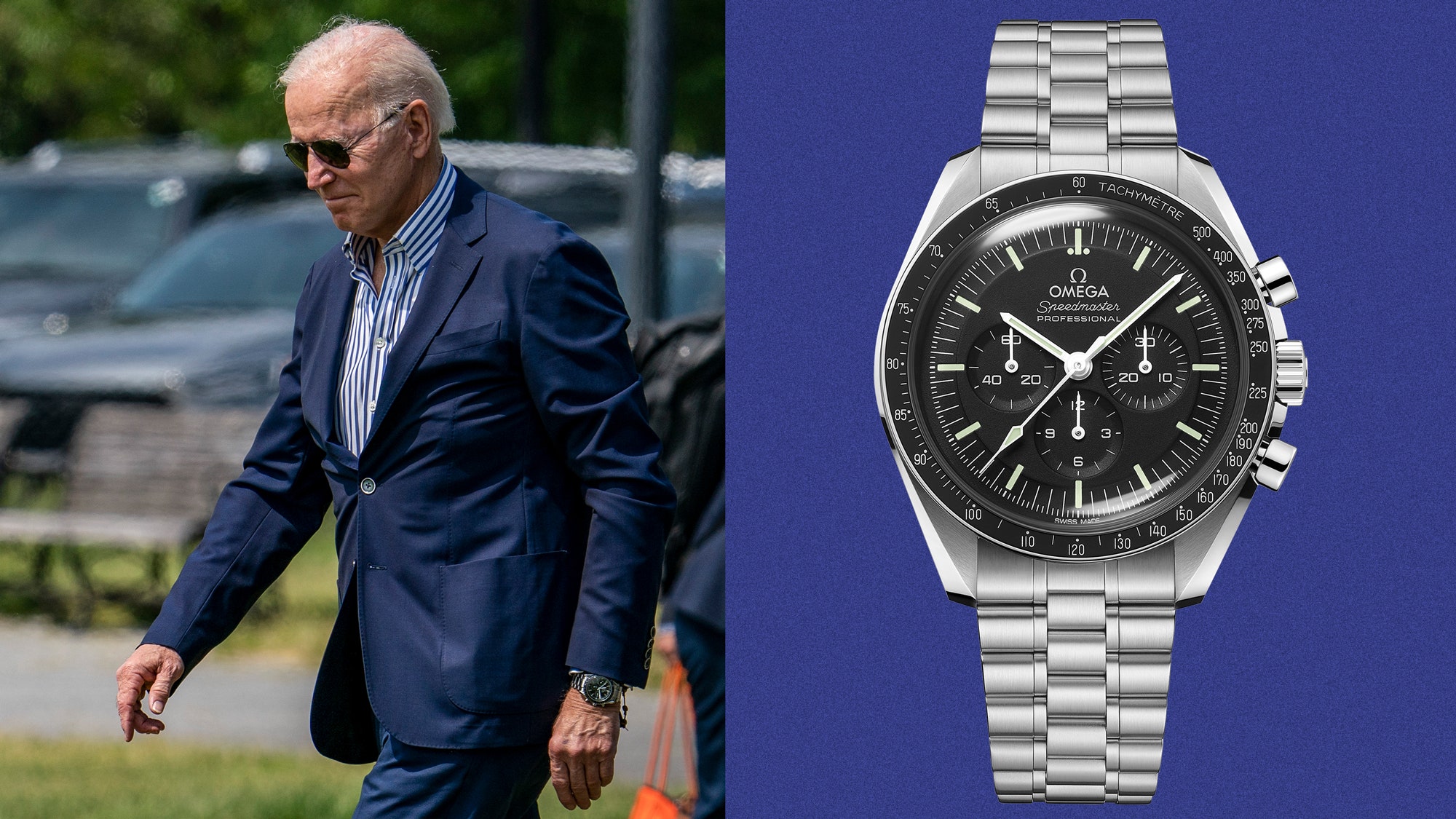 This week, for seemingly no reason in particular, Joe Biden wore an Omega Speedmaster. On Saturday, the president strolled across the White House lawn to board Marine One for Camp David, and there it was on his wrist: the familiar black dial, bezel crowded with numbers and dashes (it’s a tachymeter, and can be used to measure distance for those who know what they’re looking at) and case with three pushers. This small act made Biden the first sitting president to wear the Speedmaster, watch writer Nick Gould pointed out. That may not seem like a big deal, considering watch nerd Joe Biden has already marked a couple of horological firsts for a POTUS: he was the first to wear an Apple Watch, and it’s not likely that any other president was also an owner of the Seiko chronograph he wears frequently. However, it’s surprising no other president has worn a Speedmaster given its place in American history.

When the U.S. made good on John F. Kennedy’s promise “to go to the Moon in this decade and do the other things,” the astronauts on that mission were wearing Speedmasters. Neil Armstrong’s Omega Speedmaster is enshrined in the Smithsonian. No other watch is so inextricably linked to American exceptionalism and yet it’s escaped the wrist of every president up to 46. This probably won’t be the part of his legacy he’s most proud of, but Biden is probably already the best president ever at picking watches fitting his position. That’s at least something! He first took office wearing a Rolex Datejust, which made history as the first Rolex ever worn by a president thanks to Dwight Eisenhower. Now, he finally puts the Speedy where it rightfully belongs. Also this week, a whole cast of big hitters: Drake, Ben Affleck, Tom Holland!

For Omega, this surely feels like a long time coming. The watch has gotten close to a sitting president before, most notably in 1969 when, to commemorate the moon landing, the brand presented a gold version of the watch to Richard Nixon. However, Nixon declined the watch because of its value—U.S. presidents aren’t legally allowed to accept expensive gifts (in 2014, the limit was $375). That obviously wasn’t a problem for Biden, who has owned this watch since at least the fall of 2017, when he wore it during a shoot for InStyle.

What is there left to say about Drake’s watch collection? The rapper doesn’t even bother to repeat any of his ultra-valuable watches anymore. The latest piece he pulled from his sleeve is this absolutely nuts Rolex Pearlmaster. The gem-set piece isn’t something cooked up on the aftermarket, either. No, it left the factory wearing those blue, green, and yellow sapphires.

Spider-Man is far from home. In Monaco, for the Grand Prix, to be exact. His thematic dressing was spot on: Monaco, Holland wore Tag Heuer’s hot-off-the-presses special-edition watch named after the race. The standout square watch was remade in titanium and given a sleek silver-and-black dial—check out this piece to learn more about the “standard Monaco wearing a tuxedo.”

Affleck’s watch was at the center of a watch-world mystery this week. Was it the same watch Jennifer Lopez gave him in the “Jenny From the Block” video? And if so, who made it? The answers, we now know, are “yes” and Franck Muller. The Franck Muller Curvex is a fitting piece to dredge up feelings of late ‘90s/early 2000s nostalgia. The brand’s highly complicated pieces, funky designs, and distinctive barrel-shaped watches were a staple in the early aughts—think of them as spiritual predecessors to Richard Mille’s zany creations. The brand was beloved by celebrities, including, apparently, both members of Bennifer.

Promoting a movie like the A Quiet Place Part II requires a quiet watch—Krasinski knows it’s best not to draw too much attention to oneself, whether monsters with supersonic hearing are afoot or not. The Portofino hits the mark: the watch’s simple white dial and gold indices are meant to do nothing but elevate every outfit party it’s invited to. It was a smart choice for Krasinski as he bounced around the country premiering his new movie. He only needed the one watch to pair with his quarter-zip polos, silk striped shirts, and tropical, leafy button-ups.