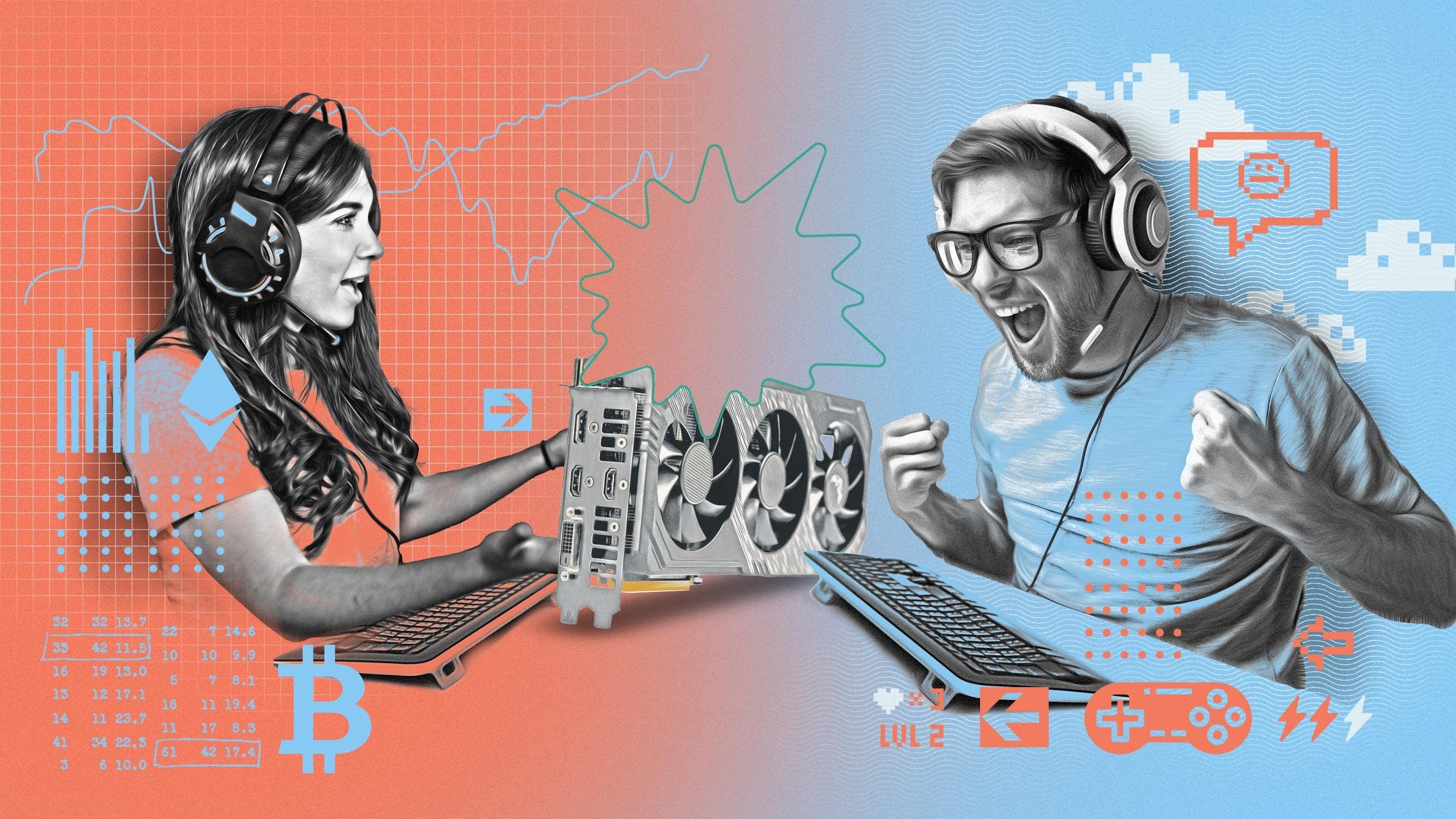 The global microchip shortage plays out every day in a scramble to acquire vital equipment for these and other demanding industries, and it isn’t likely to improve anytime soon.

Throughout the week, Doug Dejarnette heads to his Houston home’s second-floor game room and there transforms himself entirely. Sometimes the 38-year-old pretrial services officer becomes a Paladin warrior, raiding dungeons in the PC-version of World of Warcraft, and, at other times, the titular character in Half-Life Alyx, battling ETs on an alien-occupied Earth through an Oculus Rift headset. What largely makes his gaming possible is a videocassette-shaped device inside his hand-built computer called a graphics processing unit, which renders the games’ animation, allowing it to appear on a screen.

Dejarnette’s Nvidia GeForce RTX 3080 is a top-of-the-line model, and it wasn’t easy to come by. When he tried to buy a new one last year, he discovered it “just impossible to find anywhere. I woke up early at the launch day to hit every website. I finally gave up and bought one off Reddit for about $1,000,” a roughly 30% markup.

There’s a worldwide shortage of new and old GPUs right now, leading to a sense of “sheer fatalism” among gamers despondent about getting the latest tech or even replacing an old part, Dejarnette says. “It’s killing us.” And it’s led to some testy finger-pointing by gamers toward another group of geeks: cryptocurrency miners. Gamers and others observing the GPU market say the miners have wreaked havoc on the $20 billion industry, taxing it with unexpected demand while key components for GPUs—microchips—are scarcely available. The companies making the GPUs understand the situation with the miners, and as recently as Wednesday, Nvidia announced it would change some future versions of its GPUs to make them less attractive to miners. But that fix will not arrive anytime soon.

“There’s nothing out there,” says 22-year-old miner Shaneel Mohandas, considering the current availability of GPUs. The IT worker has seven GPUs running in a darkened bedroom in palm-tree-lined Durban, South Africa, each device devoted to producing cryptocurrency like bitcoin and ethereum. He figures even his aging collection of GPUs could fetch 2.5 times their original price. “It’s all over-priced stuff. And it’s driving the gamers crazy.” Through mining, Mohandas receives Bitcoin as a reward for creating blocks of verified transactions that are added to the blockchain and doesn’t have to pay for it.

The tussle between gamers and cryptominers over these high-tech gizmos is a helpful way to understand something much broader that’s going on in the world. There’s a profound, worldwide shortage of microchips, which has grown to be almost as essential as concrete, oil or wheat for the increasingly digitized planet. Nearly half-a-trillion-dollars worth are sold each year. They power the electronic systems within planes, automobiles, smartphones—and yes, GPUs. Moreover, they’re increasingly found in such everyday objects as toothbrushes, refrigerators and coffee pots.

“It’s become kind of an addiction,” admits miner Aniel Varma, of Orlando, Florida. “Everyone wants to build their own machine. It’s a money printer.”

As incomes grow globally, consumers generally want more and more of these types of things each year, and some have been in especially high demand during the pandemic. But many of the chips within these items are made overseas by foreign companies, such as Taiwan Semiconductor and Samsung. And those global supply chains have been pressured greatly by the pandemic, disrupted by factors like factory closures and border shutdowns—and by tensions between Taiwan and mainland China, which has never recognized its right to exist as a sovereign country. World governments are concerned: President Biden, for one, pledged to find nearly $40 billion to spur greater U.S. manufacturing of semiconductors in February, the same month European Union ministers met to discuss a $60 billion package meant to do the same thing in their 27-country bloc.

As with many problems so vast, the Great Microchip Shortage is best considered in miniature—which is where those gamers and cryptominers come back in. What’s happening in their little corner of nerd-dom is happening in some form across every industry relying on microchips, producing an almost comical array of besieged businesses, unruly consumers and markets gone haywire. “I think what you have is a perfect storm of things,” says Matthew Stafford, the bespectacled managing editor of Tom’s Hardware, an industry bible for the IT crowd. “Global companies expect stability. And this is anything but stability.”

Nvidia and its competitors have been making GPUs for gamers throughout much of the past three decades. By lore, Nvidia’s three cofounders are said to have, basically, dreamed up the entire market over breakfast at a dirty San Jose, California, Denny’s back in 1993, figuring there’d be a market for people looking to improve their PCs as video games got more advanced. One of those men, Jensen Huang, remains Nvidia’s CEO, and he has a personal fortune estimated at $14.2 billion. Nvidia, meanwhile, has a market valuation of nearly $370 billion. AMD, its closest rival, is worth close to $100 billion. (Nvidia’s stock price is up more than 67% over the past year, far outpacing the Nasdaq’s 43% gain.)

Gamers had GPUs largely to themselves until the last decade—when the crypto boom began. GPUs perform trillions of calculations each second, and their immense computing power can be applied to cryptomining, where a computer solves a series of complex equations, producing new portions of the cryptocurrencies that can be sold off for cash on easily accessible online exchanges, such as Coinbase.

Despite their advanced age and size, Nvidia and AMD have largely been caught flat-footed by the flourishing demand from cryptominers and don’t seem even now to fully understand what percentage of their sales come from miners, exacerbating the supply problem. In one recent conference call with Wall Street analysts, Nvidia executives cited vague third-party figures when discussing what portion of their GPUs currently go to cryptomining. “They probably don’t really know,” says Bernstein analyst Stacy Rasgon. The figure might be as much as 10%, up from essentially zilch a decade ago and nearing a half-billion dollars. The situation is probably only worsening: Crypto prices have soared over 2020 and 2021, increasing the appeal to cryptomining.

The GPU-makers don’t particularly want miners as top customers. They saw a similar burst in demand from miners back in 2017 and 2018, another moment of soaring crypto prices. But when that earlier bubble burst, the miners flooded aftermarkets with second-hand GPUs, depressing prices and suppressing demand for new models. The damage was evident in the figures Nvidia reported for its first fiscal quarter of 2019: nearly a third less revenue from a year prior, just $2.2 billion, a rare decrease for the company.

So Nvidia and the rest are not only dealing with a supply crunch but strong demand from a group of consumers who might vanish at any second if crypto prices plummet again. (Crypto is a mercurial world. In the past week, Bitcoin has gone for as much as $51,383 a coin—and as little as $34,923.) Meaning, even if supply would improve, and the companies do better integrate mining into their forecasts, they could suddenly be left with a glut of product, weakening prices.

Considering all these factors, the companies have decided against making any big adjustments. The result is the tension between gamers and miners and the mad-dash rush for whatever GPUs are out there, often used ones from eBay or ones brokered through Reddit forums for double or triple the units’ original prices.

Locating a GPU “should be as simple as just checking Newegg”—a popular online electronics retailer—“to see if they’re in stock and then buy it, but now it’s anything but that,” says Ryan Welean, 27, a gamer in Mill Creek, Washington. Newegg has, actually, resorted lately to selling new GPUs through a lottery system to handle the crush. “It’s limited stock and high demand,” Welean says. He has owned several GPUs since he began PC gaming a decade ago; he purchased a new Radeon RX 5700 from AMD last year, which has fueled dozens of hours of Final Fantasy to fill pandemic-induced downtime. “But recently I’ve been unlucky,” he says, grimly. “I’ve been on a waiting list with another site for the opportunity to buy a 3080 or 3090,” two Nvidia models, “and it’s taking a while.”

Justin Kelly, 42, straddles both worlds, a former gamer turned miner. Kelly first bought several GPUs to game—“friends would come over, we’d play Duke Nukem or Delta Force 2”—then put it toward mining Bitcoin around 2013. He has purchased $10,000 worth of the latest Nvidia cards in the past year, good enough to produce as much as $600 worth of crypto a day. He wishes he’d bought up more. “I would have spent more than $10,000. But in some cases, I wasn’t able to do that,” says Kelly, a Seattle IT consultant. Many of the sales had a strict one GPU per order limit. “If I had gone back to like my August [2020] self, I should have told him to buy like, 50 cards,” possibly flipping those Nvidia cards for several thousand dollars in profit each.

“It’s become kind of an addiction,” admits miner Aniel Varma, of Orlando, Florida. “Everyone wants to build their own machine. It’s a money printer.” Varma, 36, has managed to buy 30 Nvidia GPUs over the prior 12 months after finding someone to sell him a bot; the programmatic software can be taught to scour the web for GPU sales and snap them up as soon as a website adds them. More famously, bots have become scourges of the collectibles and sneaker worlds, making it impossible for normal buyers to purchase products fast enough.

Varma, who is also a tech consultant, has set up four computers in his house: one in the living room, foyer, guest bedroom and hallway. He mostly mines Bitcoin and Ethereum but has recently branched out to Dogecoin, too, on the insistence of his young daughter. “I’m building these awesome super-computers,” he says, proudly. “Everyone that walks in my house and sees the rigs”—miner slang for PCs—“and are just completely blown away. I’ve seen some jaw drops and some eyes popping out.”