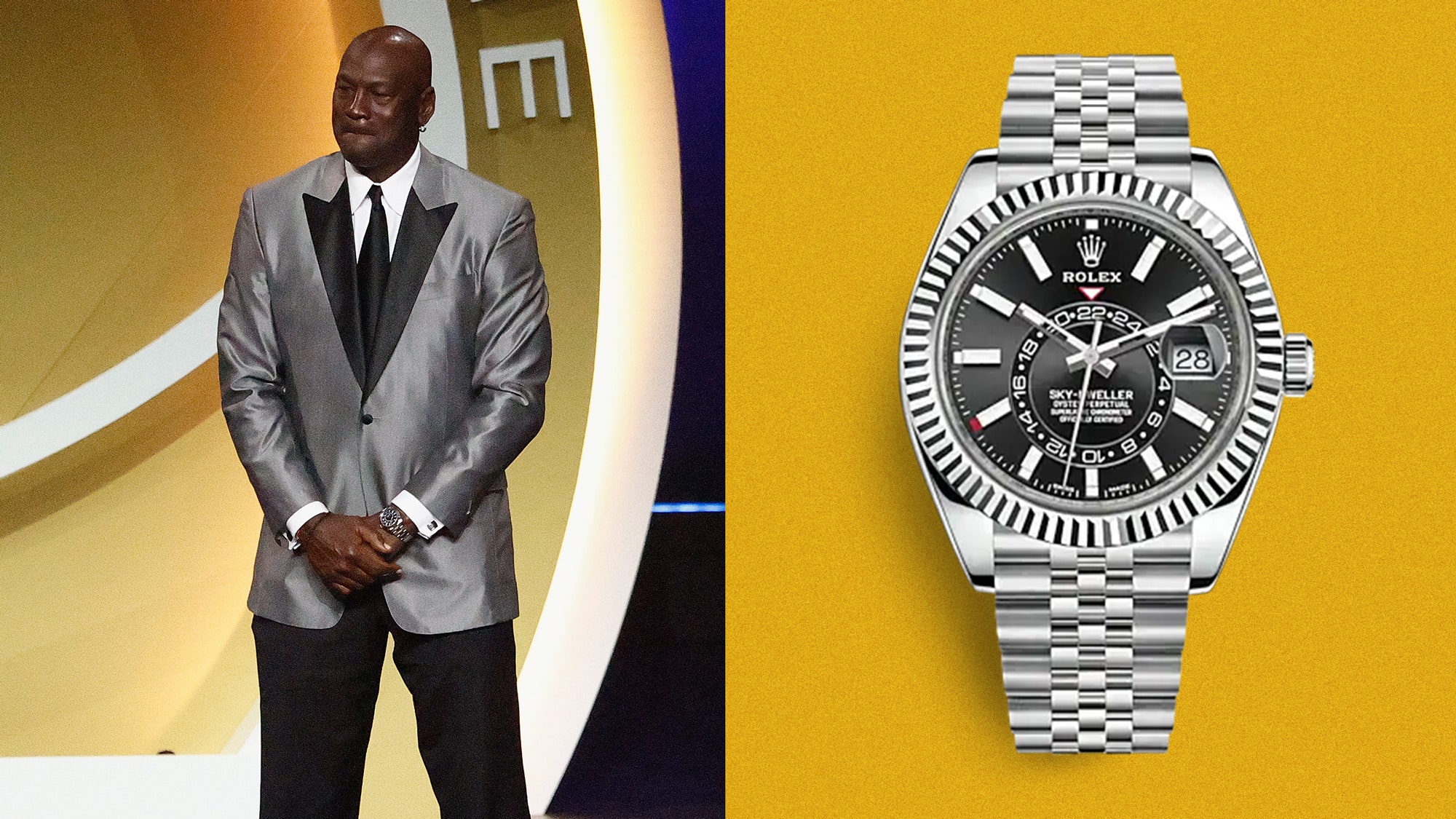 Michael Jordan, as we’ve written, is one of the most aggressively eclectic watch collectors we’ve got. Along with his bootcut jeans and v-neck tees, he is best known for rocking the futuristic creations of Urwerk, Roger Dubuis, and Ulysse Nardin. These watches crank the pedal to the metal with weird complications, show-off skeleton dials, and never-before-seen shapes. For last weekend’s NBA Hall of Fame induction ceremony, though, MJ chose something a little more conservative: a classic Rolex Sky-Dweller. The piece isn’t a complete deviation from Jordan’s thoroughly modern tastes, though. The Sky-Dweller is Rolex’s updated take on its GMT-Master II. Also this week, Courtside Drake is back and so is Rachel Green!

When we say the Sky-Dweller is modern, we really mean it. By Rolex’s standards, it’s practically a newborn. The watch was first introduced in 2012, and at the time it was the first completely new Rolex model to arrive in 20 years. While the GMT-Master was designed for pilots—the first pieces went to those at Pan-Am— the Sky-Dweller, which was originally released in a higher price tier, is more like a watch for professional fliers. So, yeah, I’d say this is an appropriate watch for Michael Jordan.

Is it weird that I’m feeling emotional about Drake popping up courtside at NBA games wearing a fabulous watch? Immediately after LeBron James drilled an off-balance three to seal the Lakers’ win over the Golden State Warriors, the broadcast cut to Drake and Michael B. Jordan geeking out over the shot. On Drake’s wrist was the watch we last saw him wearing at the beginning of the pandemic: a super-duper rare Nautilus made for the model’s 40th anniversary.

Well, Jennifer Aniston’s life is not a joke, she’s not broke, and she has the watch to prove it. In the trailer for the upcoming Friends reunion, Aniston is wearing a Rolex Day-Date. Great watch, obviously. But was really caught my eye was the way she was wearing it over the sleeve of her shirt. What style! What panache! Menswear icon (and former head of Fiat) Gianni Agnelli famously wore his watch this way, and it looks great on Aniston, too.

Jordan Clarkson is the favorite for the NBA’s Sixth Man of the Year Award, but he should also contend for Most Improved Dresser. While keeping the spirit of Tony Soprano alive this week, Clarkson wore the iconic Royal Oak. What’s different about Clarkson’s is that, while nearly everyone else is content to get the watch on the standard integrated bracelet, He went with the dressier leather band.

Rhude designer Rhuigi Villaseñor is a certified watch nut: on social media, he shows off a deep rotation of Audemars Piguet Royal Oaks, Patek Philippe Nautiluses and chronographs lined with diamonds, and customized lacquer-dial Day-Dates customized with the name of his brand on it. The watches are all part of Villaseñor’s carefully curated world: Villaseñor’s life, you might say, is a movie. And the perfect prop to fit into that world is a watch from Richard Mille. This week, Villaseñor posted his RM 67-01, an extra-thin model that nonetheless still contains Richard Mille’s famously complex mechanics.