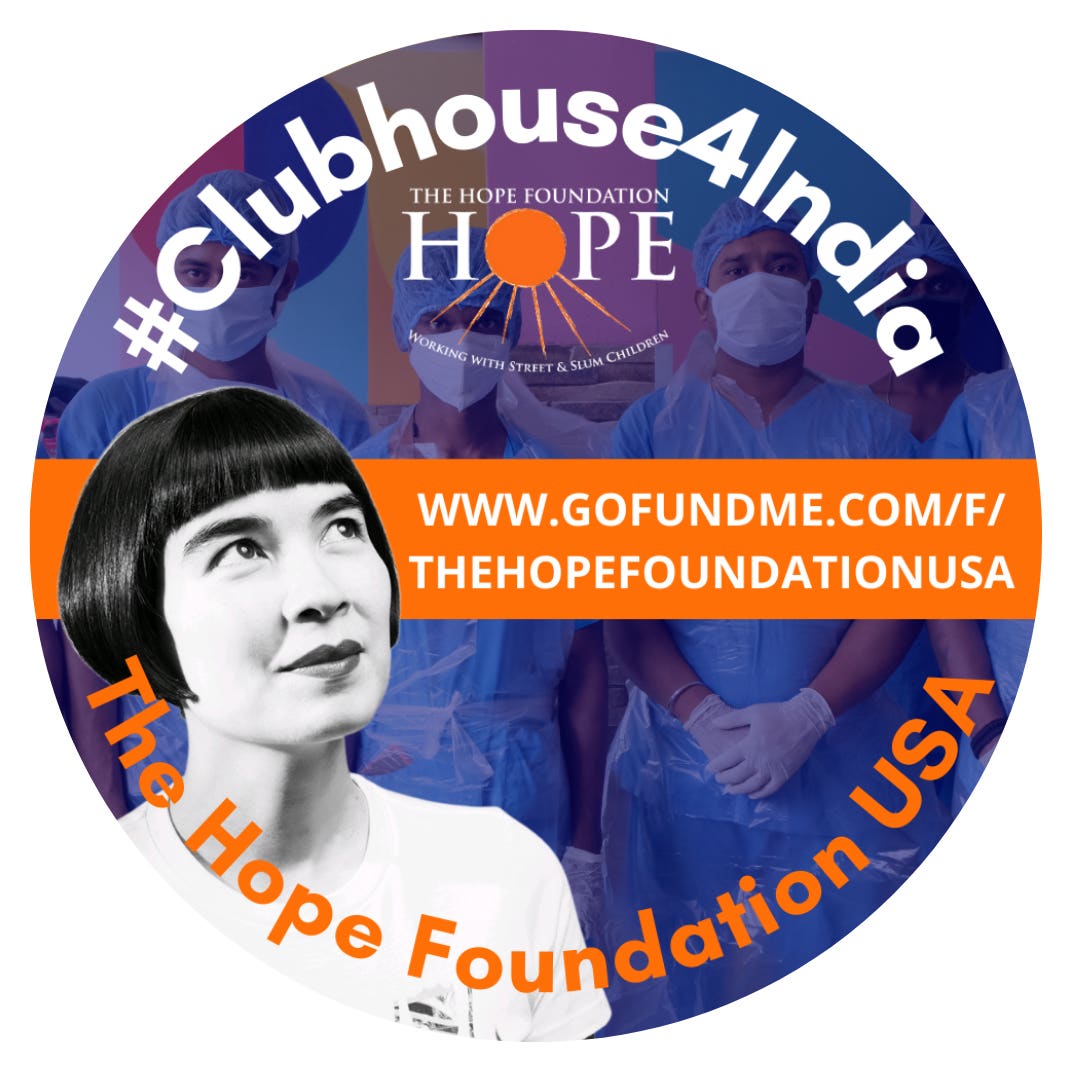 Clubhouse icon and artist-activist Drue Kataoka, whose face currently represents the hot new audio-only app on 13 million phones worldwide, already has harnessed the platform to raise close to $120,000 for racial justice, with donations going to The King Center and #StopAsianHate initiatives via the Asian American Federation. As she became increasingly concerned about headlines flooding the news about the Covid crisis in India, she devoted her efforts to fundraising for Covid-19 pandemic relief there. Together with friends and supporters – largely on Clubhouse, but also harnessing the power of Twitter and Instagram – Kataoka has spearheaded the campaign #Clubhouse4India, which raised over $175,000 for the nonprofit The Hope Foundation USA Hospital in Kolkata in under two weeks, and continues to bring in funds to this day.

How did she do it? Kataoka began by asking her friend and influencer Sonal Chokshi, editor in chief of a16z, for help. At Kataoka’s behest, Chokshi invited the HOPE Foundation USA leadership to ask for donations on “Namaste World” on Saturday, April 24. Chokshi has cohosted the popular show on Clubhouse with Snigdha Sur, the founder of Juggernaut, since June 2020. The show, which takes place on Saturday mornings, has tens of thousands of followers. According to the description, it is not by and for South Asians only, but for anyone interested in South Asian Culture. Chokshi also established the South Asia Culture Club, one of the earliest and largest clubs on the Clubhouse app, with over 28,000 followers.

HOPE Foundation USA Board member Alexandra Mysoor gave an impassioned plea based on her recent conversations with HOPE leadership and as well friends and family suffering from the Covid-19 crisis in India. A serial entrepreneur who is the Founder of Par Avion Tea, Mysoor also hosts a wildly popular podcast, the Alexandra Mysoor Show, which is available everywhere you get your podcasts as well as on YouTube.

Mysoor made two calls to action during that initial two-hour “Namaste World” show for donations to the HOPE Foundation USA via the nonprofit’s website and its newly launched GoFundMe campaign. She spoke about how the NGO, which has been working on the ground in India for over 20 years and operates 11 child protection homes in Kolkata, as well as a job skills training center and a night ambulance, desperately needed funds to increase capacity at the HOPE Hospital and to purchase more supplies, including PPE, medications, and oxygen tanks. Chokshi also created a Google doc for people to discover many foundations supporting Covid-19 pandemic relief in India.

The donations poured in. “The response was astounding,” says Maureen Forrest, the highly regarded founder of the HOPE Foundation, whose headquarters are in Ireland. Soon, over $100,000 had been raised to fund the HOPE Hospital in India.

Chokshi then invited the HOPE Foundation USA representatives to report on the positive impact of the initial “Namaste World” show on the following week’s program, which took place on Saturday, May 1. By May 2, donations totaled over $150,000. Word spread like wildfire with major news outlets, including CNN, the Washington Post, and Dave Pell’s Next Draft, all of which invited readers who wanted to help India through the Covid crisis to donate to the HOPE Foundation USA.

Mysoor, meanwhile, tapped into her social media influencer network. She asked artist Talia Zoref, who has over 110,00 followers on the platform, to host an Instagram Live event. Zoref created a piece of art during the session, then auctioned it and donated all proceeds to the HOPE Foundation. At Mysoor’s request for help for the Covid crisis in India, Miss Universe Australia Maria Thattil, Modi Toys, which makes multicultural toys inspired by Indian culture, and Ankita Bansal, an entrepreneur and the star of Indian Matchmaking on Netflix all asked their tens of thousands of followers for donations. In addition, Rukus Avenue Radio, which hosts the Alexandra Mysoor Show, announced that they would be launching a network-wide drive for the HOPE Foundation.

Kataoka then harnessed the power of her own Clubhouse group, The Art Club, which has over 101,000 followers. She devoted an entire 2.5-hour show on Tuesday, May 4 to raising money for the HOPE Foundation USA. International Fundraising Director for the HOPE Foundation and Secretary to the HOPE USA Board Maura Lennon attended in order to raise awareness and report on the latest conditions in India. She gave an impassioned plea for funds to not only continue operating the HOPE Hospital, which has been able to double its capacity due to the recent successful fundraising efforts, but also to secure a second medical facility in Kolkata and feed tens of thousands of street- and slum-affiliated families who are unable to work and therefore cannot feed their children during this Covid crisis.

On the Art Club stage with Kataoka, Mysoor, and Lennon, were also Jessica Turco, the cofounder and CEO of Global Goals Advisory, marketing/ branding guru Swan Sit, The Female Quotient CEO Shelley Zalis, #WeThePlanet Founder Kunal Sood who has been leading his own fundraising efforts for Covid relief in India, activist and UN Youth Ambassador Tenille Amor, investor and activist Marie Rocha, Wipro marketer Gurvinder Singh Sahni, and health equity activist Mohit Arora. During the session, John Legere, the former CEO of T-Mobile, pledged a $20,000 donation from his foundation. The message was amplified by other Clubhouse members on Twitter, Facebook and Instagram, including this tweet by Natasha M.

By May 5, just 12 days after the initial “Namaste World” show on April 24, total fundraising efforts totaled over $175,000. “The success of this fundraising effort, along with my previous campaigns such as #24HoursofLove for the King Center, demonstrate how social networks can be harnessed for social good,” says Kataoka. “My goal is to empower others to create similar campaigns and recognize their ability to make positive change in the world.”