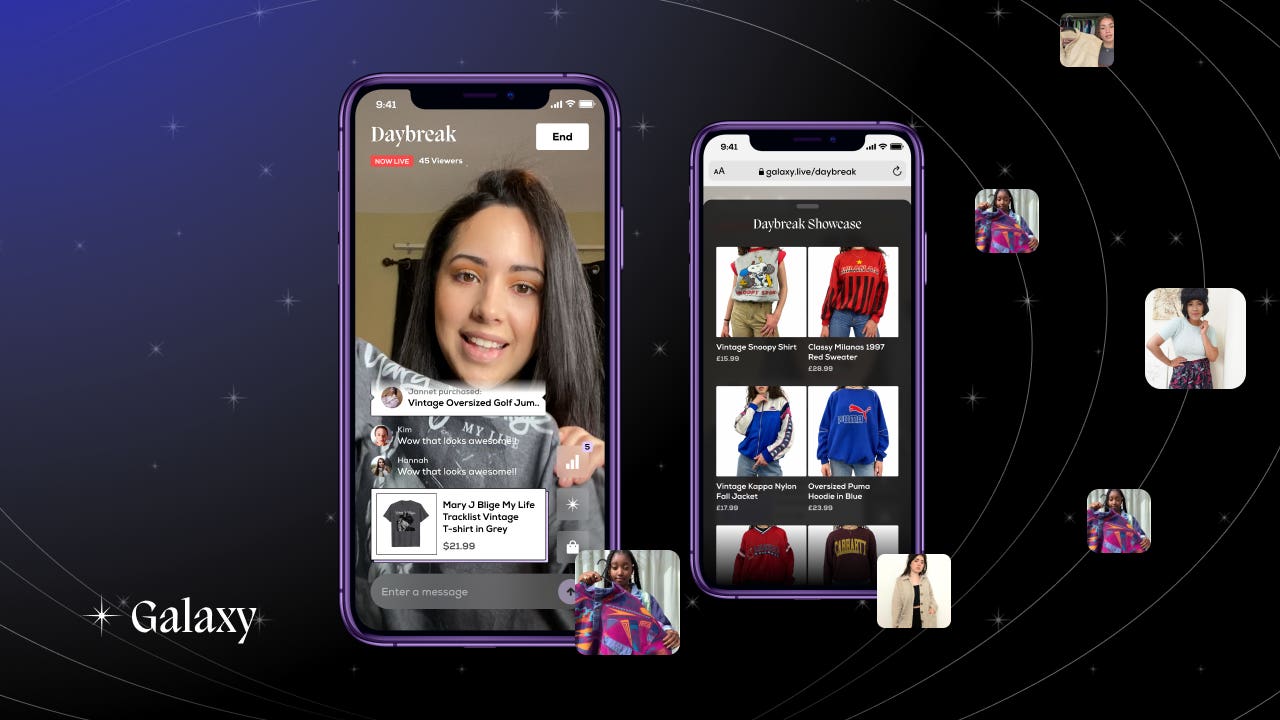 While there are plenty of lockdown-triggered trends unlikely to see the other side of vaccination season (‘quarantinis’, Zoom parties, DIY hairdressing) others have already become part of retail’s revised manifesto. Residing squarely in the latter, later this month will see the launch of a new US-based platform called Galaxy based on two of the biggest: reselling and livestream commerce, with ‘citizen seller-broadcasters’ constituting the key talent.

Centered on Gen Z – a demographic broadly entrenched in a consumer-creator ‘brand of me’ mindset where having an online side hustle is now par for the course – the resales element will tap the swelling appetite for sustainability (a market predicted to rise globally 93% to $64bn by 2024), while it’s livestream component is conceived to capture the equally rampant desire for real-time, preferably interactive, entertainment. A sense of community and camaraderie more commonly aligned to music or gaming will, or so the founders hope, be the glue that binds it together.

Here’s who’s behind it and a deeper dive into what they have in store:

The new e-marketplace is the brainchild of a trio of cutting-edge ecommerce-meets-entertainment tech specialists – Danny Quick, Nathan McCartney and Brandon Brisbon, a new breed of techpreneur raised not in the halls of Stanford or Silicon Valley internships, but on a steady diet of Internet culture, music fandoms and an inherent affinity with the opportunities/plight of the aforementioned side hustler.

The three met at SuperPhone, a platform cofounded by McCartney and American musician Ryan Leslie to ‘empower creators to build direct relationships with fans via SMS’ (it’s also been described as a CRM for SMS) before forming Stacks, the umbrella company under which Galaxy resides. Notably, Stacks raised a seed round of $2.5m in 2020 with funding from investors including Floodgate, RGH Capital, Homebrew and Snapchat, among others.

How Does it work?

It’s due to kick-off with approximately 50 ‘merchants’, all of whom will have a micro broadcast channel on the platform from which they’ll sell directly to fans. Each has been selected for having a clear niche (high-end vintage men’s t-shirts, a particular summer dress aesthetic) and who represent a new generation of style fans that are both increasingly catwalk apathetic and, most importantly say the team, “refuse to be sold fast-fashion marketing hype”. The broadcasts will be transmitted in real-time and fully interactive, so any number of viewers can chat to the host.

While the live broadcast model has been playing out for some years in China (see Mogu – a site dedicated to influencer-hosted fashion sales with several years on the clock) and Depop still dominates the Gen Z resales sphere (its so ubiquitous there’s now an Instagram feed, Depop Drama, devoted to charting beef between buyers and sellers), it’s the first time the two models have been cohesively combined.

There are potentially other challenges ahead from emerging players such as By Rotation – a platform which lets users monetize their wardrobes by lending their clothes to others, but it’s currently a more limited audience.

Tapping into the transformation of virtual, predominantly gaming, spaces into legitimate social hangouts during distancing, McCartney describes the experience as, “grounded in a dialogue that will make it feel like an almost co-creational experience. In many ways we see it echoing elements of Twitch [the livestream video platform, predominantly used for e-sports] where people will see the broadcast spaces as portals from which to start up a conversation.”

In the interests of building a credible platform, there are currently no charges to list a show, to go live, or even when selling. According to Quick: “We take no commission or fees at all. We’re really focused on working with the best creative entrepreneurs in the world creating meaningful value for them.” Fees will apparently only kick in next year, via the introduction of a subscription option for merchants who want access to tools additional to the arsenal of features that come as standard (see below) in to grow their business further. The message is that while money still talks it will always be possible to get a foot in the door.

Keen to emphasize their aim that Galaxy’s creator-merchants gain audiences organically, thus retaining their cachet, McCartney analogizes it to another mega-platform, Discord, referring to how Discord (initially a quick-fire communication tool for gamers, but now a general-purpose chat app with a whopping 140+ million users) lets users jump between hubs and channels according to their interests.

The rationale is based on the desire to build a community of kindred spirits and storytellers (“I still believe that the no. 1 thing that defines our lives are the stories we tell ourselves and one another”, says Quick) but how easy will it be to find your tribe amid the televised noise? At the outset at least, Galaxy won’t have the requisite search tools for users to find sellers according to specific interests nor will it be able to make IRL connections, such as allowing audiences to see if any of the sellers are local to them (although the team suggest this may well come later).

However, it will commence with some critical signposting; alongside some basic nudges based on users’ content consumption habits there will be a format more akin to staging gigs: i.e. a combination of social programming – lists of broadcasts (echoing the MO of a platform such as NTWRK that bills itself as ‘QVC meets Comic Con’) and spontaneous shows, dropped without warning to whip up buzz.

Key to Galaxy’s potential success is the backbone of creator-advocacy on which so much of the founders’ careers have been collectively focused: “Digital is of course now default, for better or worse, but we’ve actually always been massive fans of companies that have the capacity to emotionally take us back to a pre-digital, more human space,” says Quick in reference to the powerful allure of providing small shopkeeper/fledging band style support.

Merchant-broadcasters will apparently all have access to a dashboard of individual metrics enabling them to get a grip on their audience’s behaviors (spending but also personal interactions) and have flexibility over how they sell. For instance, they’ll have an auction tool with self-set perimeters, the capacity to add trivia-esque gamification into the mix (“as a way for people to start instigating shared languages”) and, from summer 2021, the capacity to create collaborative videos with other sellers, potentially cross-pollinating their fanbases. The team are also reviewing ways to facilitate follow-up communications post-broadcasts.

The premise of a socially collaborative video format actually was actually born from one of the team’s pre-Galaxy prototypes called Snacks – a social video app allowing creator/influencers to talk with fans via video-based conversation loops. It’s now been disbanded, but its legacy lives on in the group’s mission to make Galaxy a more authentic, edifying social media space where value is based on quality of content and genuine interactions in contrast to the currently suffocating cat-fight for volume – the ‘hollow likes’ that require nothing more than a nanosecond of attention – in order to make a living.

As Quick says: “Through building Snacks, we came to realize how the incentives and monetization ecosystem for Gen Z creators is broken (i.e. chase a bunch of followers and likes to maybe one day try and monetize it). This key learning helped inspire how we’ve built Galaxy and who we are serving. If you look at TikTok and Instagram an entire generation has basically been trained to strive to build a huge fanbase solely with the purpose of trying to monetize it later. We don’t think it has to be that way; we want our creators to have their revenue outweigh their likes from early on.”

Will Brands Ever Get a Slice of the Action?

For now, the focus for Galaxy is building the kind of peer-to-peer solidarity that will deliver on the sense of community necessary to make a platform more than the sum of its digital innovations. But it’s already being mooted as a possibility. According to Quick: “Throughout our careers we’ve worked closely with creators and I think this is an opportunity that we can help bring to brands. We may utilize our deep rolodex and relationships to pair creator-sellers with brands to amplify the brands message and reach consumers in new ways.”

Additionally, “there’s the possibility of a ‘closed loop ecosystem’ where our users can understand the history of their products, who owned them before, and see how the price of those items has changed over time. Providing those insights to brands is really a natural extension of what we’re already doing.” But not just yet. For now, says Quick, it’s about supporting those “taking their economic destiny back into their own hands.”