This article is written by Riya Dubey who is pursuing a Diploma in M&A, Institutional Finance and Investment Laws (PE and VC transactions) from LawSikho.

The start-up ecosystem is rapidly growing in India. The number of start-ups increases by 17% each year and start-ups are also getting funded at the rate of 16% CAGR. In the year 2020, despite the impact of Covid-19 India saw a strong deal flow of approximately $10 million in Venture capital investment.

Various initiatives for the growth of the start-up ecosystem of India had been taken by the Government of India. Initiatives like Atmanirbhar Bharat, Start-up India, Digital India, Alternate Investment Policy Advisory committee, Atal Innovation Mission, Small Industries Development Bank of India are some great steps taken by the government.

Venture capital is the investment made in start-up companies at an early-stage by private institutions. The capital is invested by the investors by buying equity shares of the start-up company with a long-term growth perspective. The capital invested by the investor is known as venture capital. The people who invest in these start-ups are called venture capitalists. These investments are very risky as there are high chances of losing all the money. The investment is made with the intention to make a high profit. They mostly invest in the project dealing with an innovative idea in the field of technology.

Venture Capital Tech Firms are those firms that invest their capital in start-up companies dealing with the technology. Venture capital investment is one of the most suitable options for funding a costly capital source for start-up and the start-up having large capital requirements having no cheap alternatives available. Technology-related start-ups are usually unproven and this is the reason why venture capitalists mostly invest in the fast-growing technology-based start-ups.

According to the report presented by the partnership of Indian Private Equity and Venture Capital Association (IVCA), India is among the top five start-up ecosystems globally.  Around 7k start-ups grew in India in 2020 and the number of seed deals grew at 13% in 2020. The largest-ever increase has been seen in unicorns in India as 12 more were added in 2020. Now, there are 37 unicorns in India.

As per the report, Consumer tech, SaaS, and fintech were the top three sectors that accounted for nearly 75% of the VC investments by value in 2020. In 2020 investment of $10 billion was made by venture capital and private equity, out of which $7.6 billion was directed towards these three sectors. 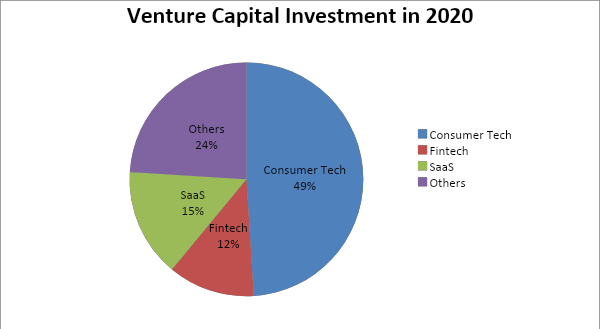 As per the data provided by IVCA report, Tiger Global leads in deal value and Sequoia Capital leads in terms of volume. 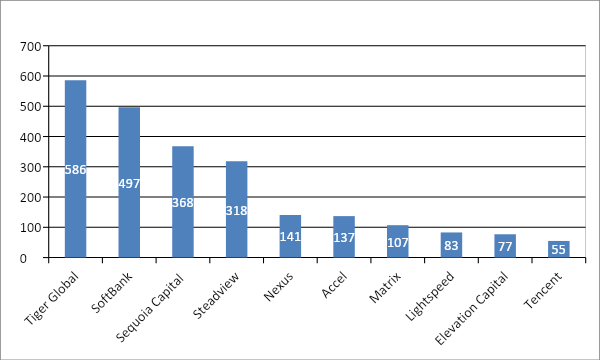 It was founded in 2001 by Julian Robertson. They mainly do investment in sectors like global internet, technology, telecom, media consumer and industrial sectors. They invest in the early-stage venture, late-stage venture, Post-IPO, private equity, and secondary market. By now it has done 551 investments and has made 82 exits. In 2019, Tiger Global Management raised $50 million in Zenoti. Some notable investments done by Tiger Global Management are Urban Company, Flipkart, Moglix, OPEN, Ninjacart, Razorpay.

Softbank was founded in 1981. They invest at an early-stage venture, late-stage venture, private equity, and seed. The company has been funded in various sectors like the internet, technology services, finances, media and marketing, broadband, semiconductor design, etc. Till now, it has made 258 investments and 59 exits.

In 2011, it entered the Indian market by investing $ 200 million in InMobi. And since then it has invested in start-up companies like Ola, Uber, Paytm, Delhivery, Grofers, Firstcry, Policy Bazaar, Snapdeal, Hike, etc. The target of Softbank is to infuse $10 billion in various sectors of the Indian market by 2024.

Sequoia Capital was founded by Donald T. Valentine. It is an American-based Venture Capital firm. It invests in Start-up companies at early-stage venture and later-stage venture. Till now, it has done 1,487 investment and 314 exits. According to the IVCA’s report, Sequoia Capital invested in the highest number of start-ups in 2020. It has closed its second seed fund at $195 million on March 25, 2021, under its 16-week accelerator-cum-seed funding program Surge. It mainly invests in Healthcare, Consumer Internet, Financial Sector and Technology sector. Some notable investments done by Sequoia Capital are Apple, Google, Oracle, Nvidia, GitHub, PayPal, LinkedIn, Stripe, Bird, YouTube, Instagram, Yahoo, PicsArt, Klarna, and WhatsApp. In the last 5 years, it has made 60 exits and the top three exits include OYO Rooms, Star Health Insurance, and Freecharge.

Steadview was founded in 2009. It does investment as an early-stage venture and later-stage venture. Till now, it has made 45 investments and 5 exits have been made by it. It has invested in Indian unicorn start-up companies like Dream11, Nykaa, Ola, Unacademy, Policybazaar, Zomato, Lenskart. In December 2020 Steadview invested $660 million in the series J funding round.

Nexus Venture Partners was founded in 2006 by Sandeep Singhal. Nexus invests in global technology products and technology-led businesses for India. It is known for investing in Snapdeal, Unacademy, Delhivery, Druva, Postman. Till now, it has raised 254 investments and has made 36 exits. Its most notable exits made by the Nexus Venture Partners include WhiteHat Education, Delhivery, PubMatic, and ShopClues. The most recent investment made by it was ₹910 million in March 2021 in Quizizz.

Accel is an American venture capital firm was founded by Jim Swartz, Arthur Patterson. By now it has made 1,556 investments and has made 311 exits. It has raised $550 million for its sixth Indian fund. It has closed six funds in India. In 2016 it has invested in Flipkart and Swiggy by $450 million. The most recent investment in India was on January 27, 2021, when VenWiz raised $3 million. The most notable exits made by Accel are from Deliveroo, Spotify, and Facebook. It is mainly focused on computing and storage infrastructure, consumer internet and media, enterprise software and services, mobile, networking system, retail consumer, security, and technology-enabled services.

Matrix was founded in 2006 by Paul Ferri. They invest in early-stage ventures and late-stage ventures. Till now it has made 129 investments and has made 9 exits. The current portfolio of Matrix India includes Ola, Practo, Dailyhunt, Mawipe, Five-star business finance, Treebo, Limeroad, Razorpay, Ziploan, Ofbusiness, etc. Its notable exit includes shopclues, justdial, testbook.com. In April, 2021 it has invested $110 million in Ofbusiness. Its other recent investment includes Antwalk, Crijo.Fun, OZiva, Captain Fresh, Vogo, Saveo, etc.

In April, 2021 Lightspeed has invested $502 million in Sharechat and its other recent investment includes Tripledot studious, Healthplix, etc.

Elevation Capital and Think Investment have come together and had launched a blank cheque company Think Elevation Capital Growth Opportunities. It will be focusing on technology-based start-ups in India. According to the filing done by the US Securities and Exchange Commission, the special purpose acquisition company (SPAC) Think Elevation had filled for $225 million Nasdaq IPO.

Tencent was founded in 1998. It has made 566 investments by now and has made 98 exits. The most notable exits made by it include Spotify. It mainly focuses on artificial intelligence, communications, digital media, e-commerce, edtech, fintech, healthcare IT, transportation, enterprise IT, robotics.

For start-ups, 2020 was a tough year but it proved to be an opportunity in crisis for the tech based start-ups. Covid-19 has led to an increase in the digital trend in all the sectors which is reflected in the venture capital money flow. Like, Byju’s an ed-tech start-up in the month of January, July, and September of 2020 closed the deal of $720 million, followed by Zomato a food-tech start-up.

Shift to online services and transactions have accelerated due to Covid-19. Study shows that digital maturity of Indian enterprises has increased from 34 % in 2018 to 55% in 2020. Tech start-ups are growing and the shift can be seen towards SaaS. Growth can be seen in India at a scale of 8-10 % year on year in tech-based start-ups. In 2020, 14% of the total investment was done in tech-based start-ups.

According to the report by NASSCOM in partnership with global management strategy consulting firm Zinnov, 2021, 2021 is going to be the ‘Decade of Collaboration’.