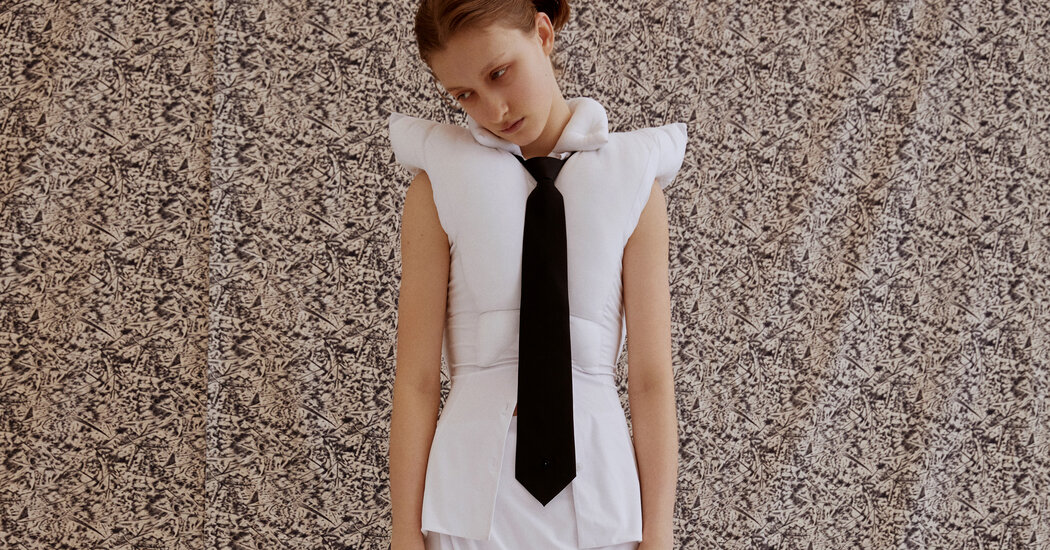 In March of last year, the fashion designer Myung Eun Cha had her friends fill out a survey on the nature of rest. She’d paused her graduate studies at London’s Central Saint Martins, opting instead, like so many of her peers, to wait out the pandemic’s spikes and dips back home in her apartment in Seoul. “My friends defined rest as a ‘free state of being alone, unconscious of anyone’s gaze,’” says Cha, 30. “Yet even if they were by themselves, they didn’t feel that because they were forced to stay at home with anxiety and worries about the near future.”

Cha could relate all too well. But, after spending long hours reading on the sofa or snacking in bed, she noticed that interacting more intentionally with her surroundings alleviated her nervous boredom and even brought about, she says, “a great sense of tranquillity.” She began twisting and manipulating pillows, cushions and rugs to create an enveloping barrier between her body and the hard surfaces of walls, floors and chairs. “I experimented with these things to find out how they draped and covered me,” she says. Eventually, her observations led to the 22 pieces that make up the fall 2021 collection of her fashion label, Cha Myung, which the designer has titled A Journey of Seeking Comfort.

Despite the collection’s origins and name, however, its contents are a far cry from what people mean when they use the term “loungewear.” Rather, the pieces are highly conceptual, with voluminous protrusions reminiscent of ’90s Comme des Garçons or the sculptures of Barbara Hepworth. A matching caramel brown top and tapered trouser, both constructed from heavy polyester that might otherwise have been used for curtains, recall a La-Z-Boy come to life. The squelchy bounce of a synthetic bathmat appears here as bandeau top. And an Ikea sheepskin throw rug adorns the backside of an ankle-length skirt, serving as a built-in cushion for sitting. In their materiality and reimagining of standard silhouettes, the designs pose a central question about presentation and purpose: What if, rather than aspiring to a pleasant sort of unobtrusiveness, we chose garments that provided literal support?

In a way, the query builds on those Cha has been posing to herself for decades. Growing up just outside of Seoul in Anyang, South Korea, she developed an early fascination with the interplay between form and space. Her father worked as an engineer at an architecture firm, and she has fond memories of poring over blueprints and touring newly built museums with him. She was sure she’d become either an architect or a product designer, and still cites Frank Gehry and Zaha Hadid as major influences but, when she was 17, issues of Elle Girl and street-style magazines piqued her interest. She left to study at Parsons School of Design in New York the following year.

As she began to design clothes, Cha mined postmodern architectural theory, particularly deconstructivism, to make pieces that “break away from tradition,” she says, and that change shape depending on the angle from which they’re viewed. For her thesis show, she took the jumble of clothes on her bedroom floor as her starting point: The “wrinkled and distorted shapes,” in materials including denim, pinstriped wool and crisp white poplin, helped her break down the elements of a classic New York wardrobe and reconstitute them with exaggerated proportions. Since graduating in 2017, she has moved from “looking at my surroundings in my dorm room, which was the only private space for me as an international student in New York,” to exploring other kinds of environments.

At the beginning of each collection, after she’s worked out the basic idea, Cha turns to photography, hand drawing and 3-D design to help her arrive at a visual vocabulary. For A Journey of Seeking Comfort, in addition to relying on her own interiors, she looked to those featured in vintage issues of the Gio Ponti-founded design magazine Domus. The pointy arms of Mario Bellini’s 1970s Tentazione chairs for Cassina — which emerge like bull’s horns from a soft and friendly body — became epaulet-like details on Cha’s wry take on a work-from-home button-down, complete with a sewn-on tie. “It looks formal, but it’s very comfy,” she says. Also included in the collection are bulbous, beanbag-inspired bottoms made from four-way-stretch jersey and stuffed with cotton filling, and a cushiony green jersey top with a single button tuft inspired by her sofa and meant to evoke the “feeling of fluffy forms.”

“The meaning and spirit inside the garments are very important,” says Cha, who worked with a neutral color palette, chosen for its mellowing effect, accented with pops of creamy yellow, pale blue and teal. Here, the meaning seems to be about being kind to oneself and engendering ease amid discomfort. But the clothes might also be armor for re-entering the larger world, as with a top made from soft, overstuffed black jersey that recalls a neck pillow for a long-haul flight. For her part, the designer is very much looking forward to returning to London in the fall. “I want to meet friends, talk in person and go to the library,” says Cha, who has already received her share of buzz but is also planning to officially launch her line after graduation. In the end, she didn’t find working on this latest collection especially relaxing, but hopes it inspires others to get some rest, adding, “It’s a very necessary thing.”

On the Pointlessness of Pointy Shoes

The Best Socks for Every Situation, Style, and Budget