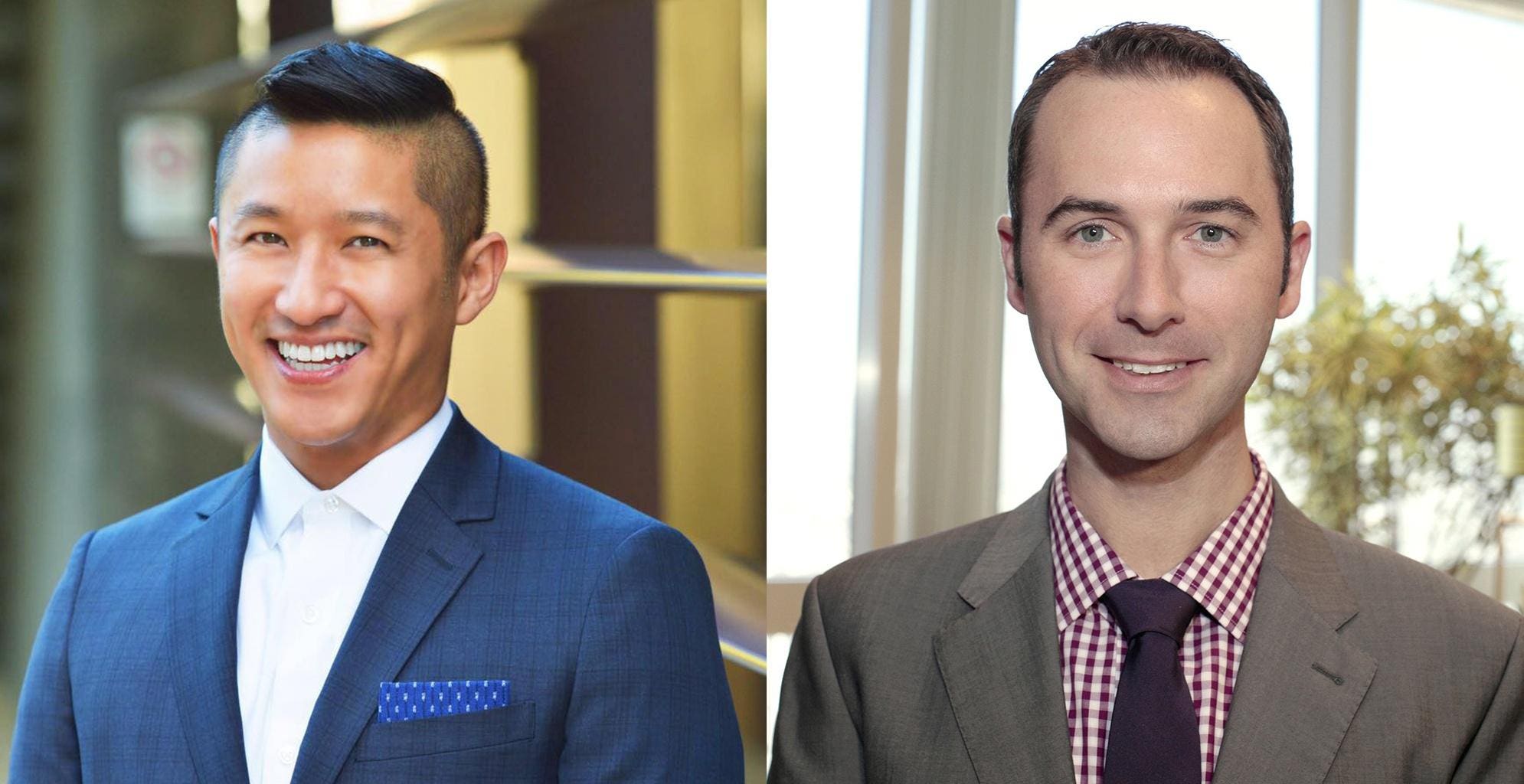 “It Gets Better:” Those three words served as the centerpiece of a successful social media campaign launched in 2010, providing hope and encouragement to young LGBTQ people. In 2021, those words represent an international organization that reaches millions of people around the planet through the power of video.

The It Gets Better Project is announcing today its biggest change since its inception 11 years ago — even bigger than when it opened an account on TikTok last year: Attorney Seth Levy, a founding member of the nonprofit that tells the stories of lesbian, gay, bisexual, transgender, queer and questioning youth, is stepping down as president and chair of the board of directors. It’s a position he has held since author and syndicated advice columnist Dan Savage and his partner, Terry Miller, created the It Gets Better Project as a 501(c)3.

The organization, which bills itself as the world’s largest storytelling effort to empower LGBTQ youth, has tapped 40-year-old Paul Dien as president and chair of its board of directors. Dien joined the It Gets Better Project board in 2017. In an interview prior to the announcement, Levy, 44, said he will remain on the board, and called this “a time to celebrate.”

“My crown and scepter are being taken away now,” joked Levy, who is an out gay man. “It’s a great moment to make a transition because the organization is doing so well. I found that when I’m serving in this leadership role and in other organizations, it’s so nice to be able to do something like this when times are good and there’s something really positive to hand-off.”

It Gets Better Project has 67.5-thousand subscribers on YouTube, more than 189-thousand followers on Twitter and almost as many on TikTok, with more than 2.5-million likes in a little over a year. Actor Kyle Dean Massey’s video, reflecting on his video a decade ago, is the newest addition.

“This has always been a team-effort with a team that has only, I think, gotten more fabulous over time, as we brought on more people and really found our voice and our rhythm,” Levy said. “And frankly, I couldn’t be more thrilled that Paul’s the one picking up the mantle and moving us forward.”

“I am a huge fan of the organization,” Dien said in an interview prior to the announcement, revealing he joined the board of directors in the wake of the 2016 election of President Donald Trump. “I’ve always worked in social impact and marketing and entertainment, and I was like, what else can I do? I felt like there was more to do.”

In his new position at It Gets Better, Dien said he considers himself its champion. “I think this role is to dream and think about the next five years, the next 10 years, as we grow; To be an advocate for what we’re doing in terms of storytelling and sharing these amazing stories,” he added, “to amplify voices to tell young LGBTQ youth that it does get better.”

As the nonprofit shifts from a lawyer leading the brand to a senior-level marketer with experience in social impact, music, luxury brands, entertainment and fashion, it also makes an intersectional choice: Dien, who heads up strategic partnerships for Good and Upworthy and has managed his own agency in Shanghai, is both gay and Asian-American.

“I’ve definitely felt racism, as an Asian. But then simultaneously, I’ve dealt with homophobia in the Asian-American community,” said Dien. His response to haters is to be himself, no matter what. “This is who I am, and I’m unapologetic. And I think the more we can kind of amplify and talk about those issues, the better it can be.”

May is Asian and Pacific-American Heritage Month. In our conversation, Dien noted he’d just seen a report that anti-Asian hate crimes spiked by 164-percent in the first quarter of 2021. “These are conversations we’re having in the AAPI community,” he said. “It is a reckoning, and I think we’re trying to take space and and learn from other communities like the LGBT community and BLM about the struggle and just kind of owning it.”

Levy is a partner at Nixon Peabody LLP, an international law firm, who focuses his practice on intellectual property protection, licensing, strategy, and disputes, as well as research transactions and operations, particularly in life sciences and health care. He spoke from Idaho, where he is representing an incarcerated transgender woman and fighting to make sure “she’s able to get her hormone replacement therapy, called by her proper pronouns and treated appropriately,” he said.

It Gets Better co-founder Dan Savage recently drew criticism for standing up for a fellow writer whose work has been lambasted as transphobic, claiming that wasn’t a fair characterization. In March, GLAAD added Jesse Singal to its “Accountability Project” alongside Trump, Georgia’s two former Republican senators and a Fox News contributor. Savage wasn’t having it.

The Advocate staff writer Mey Rude responded, “Savage isn’t trans, and neither is Singal, and neither man is a cis expert on trans issues or on what is or isn’t transphobic.” Rude is herself transgender, and lesbian. Both Dien and Levy had something to say about Savage’s remarks, while noting he is no longer involved in the project day to day.

“I really can’t comment on whatever Dan’s relationship with the trans community is; that’s been a complicated one for a long time,” added Levy. “All I know is that as a co-founder with them and having done a lot of work with them over the years, he’s done a lot for that community, often through this project. And so I hope at the end of the day, that’s what people start to understand, is that we’ve all really been trying to fight the same fight, even if we don’t always get along along the way.”

The project partners with organizations around the world, a role Levy has shepherded from launch, when “it really was just a couple of us in my living room,” he said. “In the earliest of days, I mean, literally, week one was that videos were being contributed by people all over the world. People were writing in, sharing their stories. Young people were reaching out, organizations were reaching out.”

The next big step Dien is excited about is expanding It Gets Better to other closeted corners of the world, such as Asia, over the next five years.

“We don’t have a huge footprint in Asia right now,” he said. “We have an affiliate in India and an affiliate in Shanghai, but there’s a lot of other other countries in Asia that need our support. We’re in over 20 countries and we have this amazing framework because we’re in so many Latin American countries now. We know every country and culture has nuances and complexities around sexuality and what it means to have LGBTQ rights. So it’s creating those safe spaces, but then also working with our affiliate programs to understand how we can help them do what they need to do.”

In vacating his role as vice president of the board of directors, Dien is making room for board member Avrielle Gallagher, a seasoned nonfiction producer and development executive specializing in creating, developing and producing premium documentary content, to rise to V.P. “She’s an amazing woman and a huge ally for the community,” said Dien.

“There’s long been a challenge of straight white men being the representatives for a lot of these organizations. And I think showing the diversity within our community is important not just for optics and the message it conveys, but because these perspectives are so important,” said Levy, who is white. “The diversity conversations we’re having in other circles in corporate America and universities, wherever it is, it’s no different in our organization. We need to hear from from the API community. We need to have representation from the Black and brown community because there are issues that are similar among us and they’re issues that are just different or that are multilayered based on the different types of diversity we each bring that are not just one thing. One of the things that Paul and I are working on is having some conversations with stakeholders and organizations to help weave these things together. Paul’s a good example of someone who exists in both worlds.”