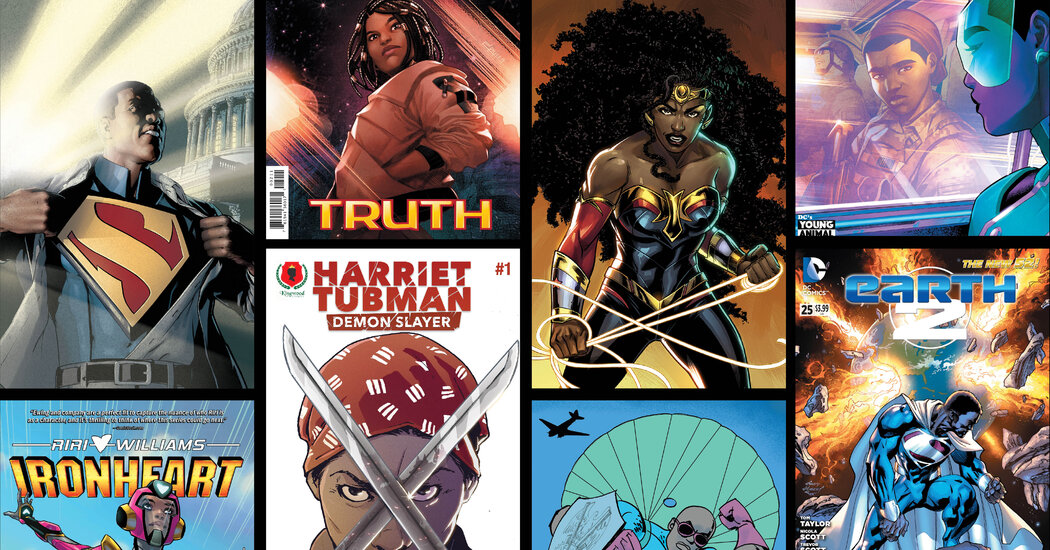 7. The article ends with the thoughts of Malcolm Spellman, the “Falcon” showrunner:

All of these heroes are, in their own way, fighting for an equality that seems ever elusive. For Spellman, the opportunity to write stories about Black superheroes is part of a concerted effort to tip the scales.

“I absolutely believe that this helps re-contextualize us in a more universal way,” he said. “If we are first and foremost perceived as less than, and I do believe that everybody on the planet looks at us that way, a superhero is greater than. That primal math, via a megaphone like Marvel — that’s powerful.”

What is your reaction to Mr. Spellman’s quote? Do you think superheroes can help to “tip the scales” and bring greater racial equality? Did reading the article change how you see the role and power of superheroes?

Option 1: Learn more about the creators of the new wave of Black superheroes stories.

In “Flying While Black: Two Creators on Inventing (and Reinventing) Black Superheroes,” Eve L. Ewing and Evan Narcisse write about the politics of being a Black comic-book writer. In her essay, Ms. Ewing, the author of the Marvel series “Ironheart,” discusses what it means to have Black superheroes:

Superheroes reflect our shared cultural mythologies: what it means to be good, to be courageous, to face unbeatable odds. In recent years, “representation matters” has become a refrain acknowledging how vital it is that children see possibilities for themselves in media.

But superheroes represent something beyond that. It’s not only that if little Black girls see Ironheart being brave, they will understand that they can do the same because they look like her. It’s that superheroes serve as a shared cultural mirror, paragons of what bravery even is.

For example, in one of my favorite panels from the series (shown above), I wanted to show the unbridled joy Black kids from Chicago would feel if they got to meet Ironheart and experience flying for the first time. It’s important to me to push against the adultification of Black children, and show them being silly and having fun. This is also a full-circle moment because, early in the story arc, Ironheart catches the boy in green committing a petty crime, but instead of punishing him, she wants to help him.

Mr. Narcisse, the author of the Marvel graphic novel “Rise of the Black Panther,” writes about the need for telling a multiplicity of Black superhero stories from Black creators’ perspectives:

The first waves of Black superheroes started showing up in comics decades ago, dreamed up in editorial offices staffed almost entirely by white men. Some of those trailblazing characters: John Stewart (Green Lantern, part of an intergalactic peacekeeping organization), Sam Wilson (Falcon, a close ally of Captain America who uses high-tech wings to fly) and Luke Cage (Power Man, an ex-con hero-for-hire who gained super-strength and durability after a prison experiment). They all had early stories linked to the midcentury idea of the ghetto and were often only used when creators wanted to comment on social unrest or systemic injustice. These heroes’ primary purpose was to attract new readers to publishers like Marvel and DC.

But for too long, Black superheroes hewed too closely to a few shallow stereotypes. Conversations about racial and ethnic representation in mainstream media often include a common postmodern refrain: “Black people aren’t a monolith.” The same goes for Black superheroes, who have the power to deftly demonstrate the multiplicity of Black experiences.

As Black creators have slowly made their way into those companies, they have used characters like Luke Cage, Misty Knight (police officer turned cyborg private eye, a friend of Luke Cage) or Nubia (Wonder Woman’s Black Amazon sister) to expose audiences to facets of Black life they might not ordinarily encounter.

Read one or both of the essays in full, and then discuss with your classmates:

Now it’s your turn: Which superhero would you like to see rebooted or reinvented? Batman? Spiderman? Ms. Marvel? How would you reimagine his or her character and mythology? How might you reshape the story to better reflect your identity or the identity of other audiences? How might you revamp the hero’s costume, superpowers or villains he or she fights?

Keep in mind the words of Eve L. Ewing, author of the Marvel series “Ironheart,” as she set out to redesign the 15-year-old character Riri Williams: “My job, as I saw it, was to puzzle out the deeper elements of who she is with and without her armor. What fears and desires motivate her? What are her quirks and flaws? Who are the people in her life who love her?”

Create a pitch to comic book makers or Hollywood executives to get approval for your project. Feel free to include sketches of your revamped character.

When you are done, share and celebrate your superhero with your class.