If we consider the resistance, most of the industrial sensors like temperature, strain, humidity, displacement, liquid level, etc. produces the change in value of the resistance for an equivalent change in the respective quantity. Therefore, there is a need for a signal conditioning for every resistance based sensor.

For example, the simplest device we can think of is the Light Dependent Resistor or LDR. As the name suggests, an LDR is a device, whose resistance changes according to the amount of light falling on it.

Generally, the resistance measurement is divided into three types:

And very high resistance measurement is considered from few Mega Ohms to greater than 100 Mega Ohms. For finding the medium value of the resistance different methods are used, but mostly Wheatstone bridge is used.

What is Wheatstone Bridge?

Bridge Networks or Circuits are one of the most popular and popular electrical tools, often used in measurement circuits, transducer circuits, switching circuits and also in oscillators.

Wheatstone Bridge is used in applications where small changes in resistance are to be measured in sensors. This is used to convert a change in resistance to a change in voltage of a transducer. The combination of this bridge with operational amplifier is used extensively in industries for various transducers and sensors.

For example, the resistance of a Thermistor changes when it is subjected to change in temperature. Likewise, a strain gauge, when subjected to pressure, force or displacement, its resistance changes. Depending on the type of application, the Wheatstone Bridge can be operated either in a Balanced condition or an Unbalanced condition.

A Wheatstone bridge consists of four resistors (R1, R2, R3 and R4) that are connected in the shape of a diamond with the DC supply source connected across the top and bottom points (C and D in the circuit) of the diamond and the output is taken across the other two ends (A and B in the circuit). 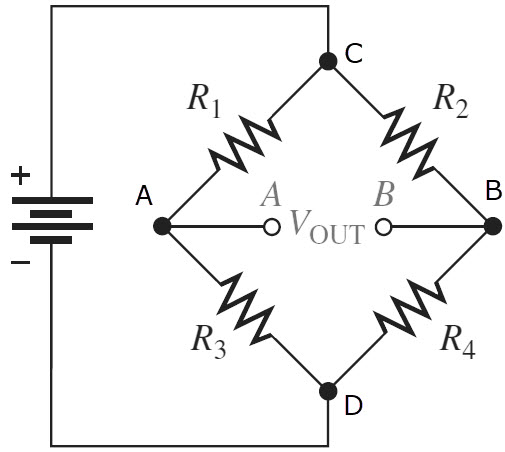 For this bridge to be in a Balanced Condition, the output voltage at points A and B must be equal to 0. From the above circuit:

The Bridge is in Balanced Condition if:

To simplify the analysis of the above circuit, let us redraw it as follows: 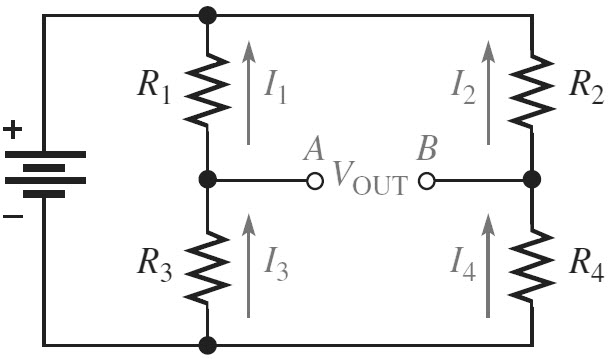 The ratios of the voltage can be written as:

From the above equation, if we know the values of three resistors, we can easily calculate the resistance of the fourth resistor.

From the redrawn circuit, if VIN is the input voltage, then the voltage at point A is:

Similarly, the voltage at point B is:

So, in Balanced Bridge Condition,

Using above equations, we get:

After simple manipulation of the above equation, we get:

From the above equation, if R1 is an unknown resistor, its value can be calculated from the known values of R2, R3 and R4. Generally, the unknown value is called as RX and of the three known resistances, one resistor (mostly R3 in the above circuit) is usually a variable Resistor called as RV.

In the above circuit, let us assume that R1 is an unknown resistor. So, let us call it RX. The resistors R2 and R4 have a fixed value. Which means, the ratio R2 / R4 is also fixed. Now, from the above calculation, to create a balanced condition, the ratio of resistors must be equal i.e.,

Since the ratio R2 / R4 is fixed, we can easily adjust the other known resistor (R3) to achieve the above condition. Hence, it is important that R3 is a variable resistor, which we call RV.

With RX placed in the circuit, adjust the RV until the Galvanometer points to 0. At this point, note down the value of RV. By using the following formula, we can calculate the unknown resistor RX.

For this to work, the Transducer must be of resistive type i.e., the resistance of the transducer changes appropriately when the quantity it is measuring (temperature, strain, etc.) changes. In place of unknown resistor in the previous resistance calculation example, we can connect the transducer. 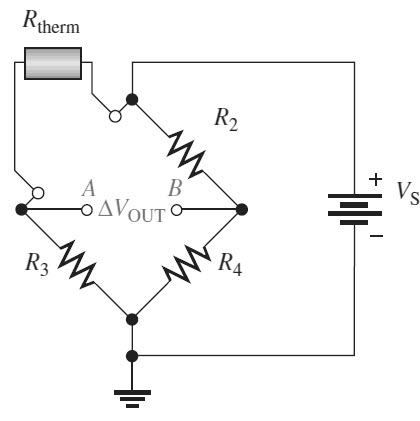 One of the most commonly used applications of Wheatstone Bridge is in the Strain Measurement. Strain Gauge is a device whose electrical resistance varies in proportion to the mechanical factors like Pressure, Force or Strain.

Usually, the range of strain gauge resistance is from 30 Ω to 3000 Ω. For a given strain, the resistance change may be only a fraction of the full range. Therefore, to accurately measure the fractional changes of resistance, a Wheatstone Bridge configuration is used.

The circuit below shows a Wheatstone bridge where the unknown resistor is replaced with a strain gauge. 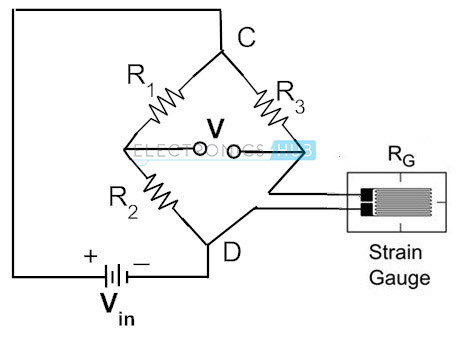 Due to the external force, the resistance of the strain gauge changes and as a result, the bridge becomes unbalanced. The output voltage can be calibrated to display the changes in strain.

One popular configuration of Strain Gauges and Wheatstone Bridge is in Weight Scales. In this, the Strain Gauges are carefully mounted as a single unit called as Load Cells, which is a transducer which converts mechanical force to electrical signal. 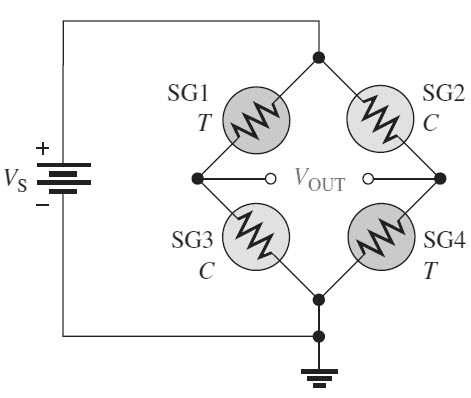