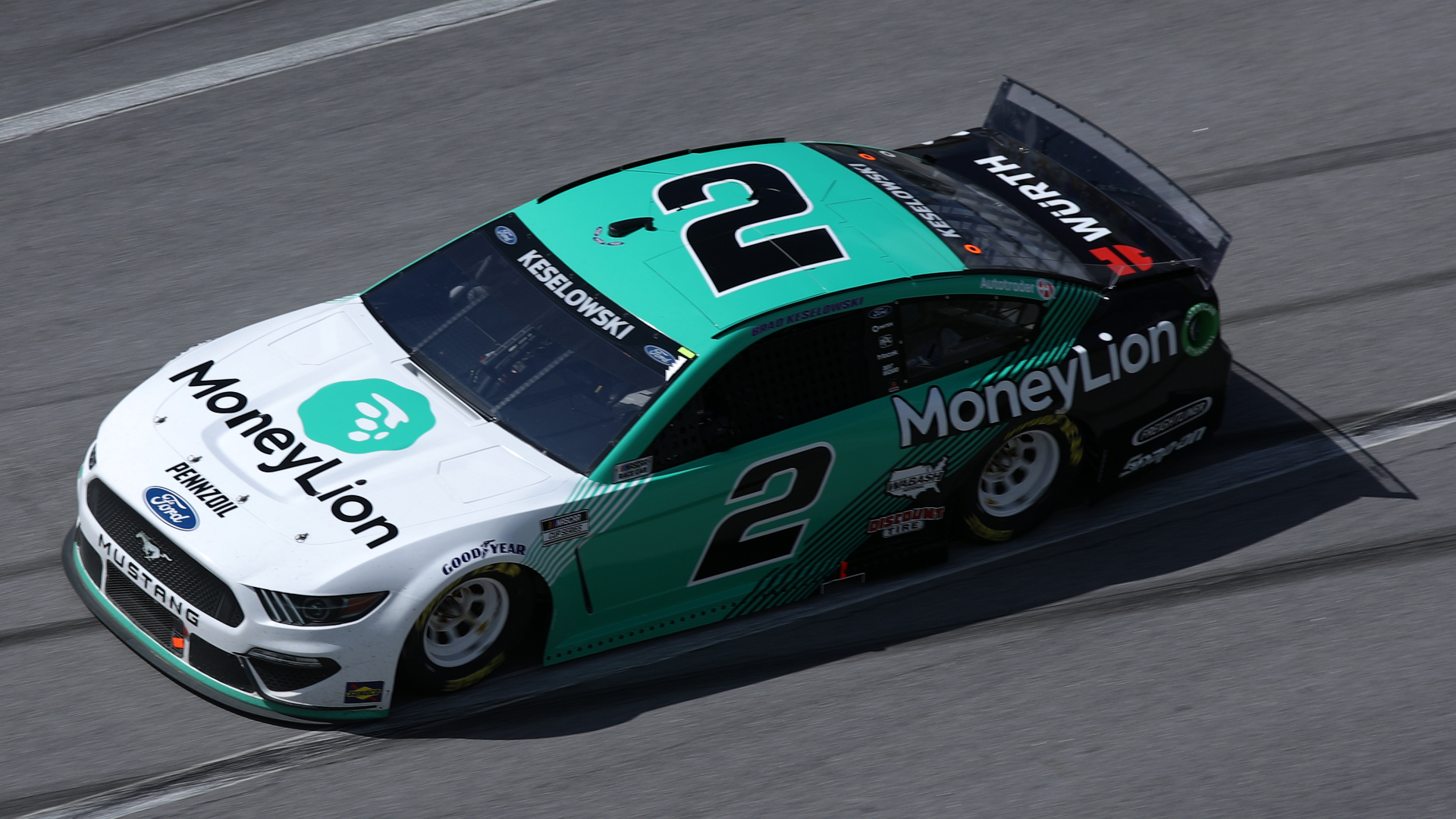 Brad Keselowski only led one lap at the 2021 GEICO 500, but it was the only one that mattered.

Keselowski took advantage of an overtime period to earn his sixth win at Talladega Superspeedway and his first win and his fourth top-five finish of the season. He also become the ninth different winner in the NASCAR Cup Series in 2021.

William Byron, Michael McDowell, Kevin Harvick and Matt DiBenedetto finished in the top five; despite his high finish, DiBenedetto has to regret the way he finished the race.

He was in prime position to earn his first career win — but a blown rear tire on Martin Truex Jr.’s car with three laps remaining sent the race into overtime. DiBenedetto, driving the No. 21 car, held the lead heading into the final lap. But Keselowski was able to take advantage of an opening and earned the victory.

That was just the ending of an eventful race that saw just seven cautions but also saw Joey Logano’s car fly through the air; saw NASCAR Cup Series leader Denny Hamlin earn a double penalty on pit road; and saw a couple pileups.

Sporting News tracked live updates and lap-by-lap highlights from NASCAR’s Cup Series race at Talladega. Below are the complete results from the Geico 500:

5:46 p.m.: Final! And Keselowski is your winner with Chastain and Jones involved in a wreck behind him. That’s his first win of the year and fourth top-five finish.

5:45 p.m.: Blaney very briefly took the lead from but DiBenedetto retook it from him in front of the white flag. But now Keselowski is your leader! McDowell hot on his tail!

5:40 p.m.: DiBenedetto, Blaney, Keselowski, Harvick and McDowell make up the top five. Followed by Buescher, Suarez, Burton, Byron and Custer in the sixth through 10th positions.

5:38 p.m.: Wallace and Kyle Busch are the only two drivers to pit under caution.

5:29 p.m.: DiBenedetto is in the lead from the outside lane with a big push! He’s followed up by Truex, Kyle Busch, Blaney and Keselowski in the top five positions, respectively. Jones fell all the way back to the ninth position in that shakeup.

5:21 p.m.: Sixth caution. Quin Houff went into the wall and is now out of the race. Jones opted to stay out and maintain his lead.

5:17 p.m.: And now Erik Jones has earned his first lead inside 20 laps of the checkered flag. Setting up for a fun finish.

5:12 p.m.: Bell apparently was told by his team to give up four positions — from the lead! — because he was burning too much fuel. He’s in fifth place with 24 to go, so he has plenty of time and the position to challenge for first.

5:09 p.m.: And now Ryan Newman is served with a double penalty for speeding on pit row twice.

5:05 p.m.: Harvick, Almirola, Blaney, McDowell and Keselowski are your leaders with 32 laps remaining. They’re going to need to pit soon.

5:04 p.m.: Stenhouse has some issues coming into pit row, hitting the wall, but it happens away from the main pack so we’re still under green.

4:58 p.m.: Chastain, Kyle Busch and Bell make up the top three positions with just 40 laps to go. Now you have to wonder when these guys are going to pit.

4:46 p.m.: Looks like Blaney had some debris on his front grill but managed to get it off:

4:41 p.m.: Blaney, Aric Almirola, Michael McDowell, Keselowski and Buescher make up your top five coming out of the caution into the final stage of the day.

4:40 p.m.: Actually, it appears Bowman is done for the day for exceeding NASCAR’s crash clock:

Alex Bowman’s team was unable to repair his car in time and he’s done for the day, per NASCAR’s Damaged Vehicle Policy

4:38 p.m.: Bowman and Hamlin are now one and two laps down, respectively, coming out of the caution.

4:25 p.m.: Fifth caution. … And as soon as we type that, a block by Keselowski kicks off a pileup with Hamlin at the center of it. Looks like he hooked the front bumper of Truex, causing Hamlin to spin out. Elliott involved too. Lots of drivers are going to finish with damaged cars. The stage ends under caution with Wallace in first place.

4:19 p.m.: DiBenedetto puts a block on Kyle Busch, nearly spinning him out; but the latter has plenty of space in the fourth turn to get back onto the track with no issue.

4:18 p.m.: Hamlin is near the front of the pack in the free pass position. He’s going to be aggressive to try and get the lap back.

4:10 p.m.: Not many takers to lap under caution. Most drivers have the fuel to finish the remaining 14 laps of the second stage. Byron’s your stage leader with that distance remaining.

4:05 p.m.: Fourth caution. Kurt Busch’s car is filled with smoke. Left some fluid on the track and there’s fire coming out from his hood. His day is done.

4 p.m.: Oh, wow. Hamlin was too fast on his passthrough penalty and has to go into pit row a second time. Absolutely awful. He’s one lap down and half a straightaway from a shot at the free pass position.

3:56 p.m.: Hamlin with a disastrous pit stop; he’s called for entering too fast and is assessed a pass-through penalty. That’s his second speeding penalty of the year.

3:51 p.m.: Hamlin, DiBenedetto and Truex make up the top three positions, respectively, 28 laps into the stage.

3:48 p.m.: Twelve cars pit 25 laps into the second stage, including Elliott. Hamlin, who had four tires coming out of the last pit, remained on the track.

3:44 p.m.: Chastain nearly causes another wreck when he cuts to the outside lane right in front of Keselowski; the latter avoids the contact and the race continues on.

3:36 p.m.: DiBenedetto, Hamlin and Elliott all jockeying for first place, with the former in first place 10 laps into the second stage.

3:26 p.m.: DiBenedetto loses three spots under the pit. Elliott and Hamlin move up into the top two positions, respectively.

3:21 p.m.: The stage ends under caution with DiBenedetto in the lead.

3:19 p.m.: Third caution. And there’s our first significant crash of the day. Hamlin tries to cut into the outside line but undercuts Logano, who spins out and catches air. He says he’s OK on the radio. Looks like Ricky Stenhouse Jr. was involved in that as well: His car is the one who sent Logano flying. Wallace got clipped as well.

3:17 p.m.: Preece and Matt DiBenedetto are jockeying for first place with just three laps remaining in the first stage. Both are looking for their first career win.

3:15 p.m.: And now it’s Ryan Preece in the lead pack with just five laps remaining in the first stage.

3:11 p.m.: Logano just pushed Blaney to the top of the lead, giving the Team Penske teammates the top two positions in the race with 10 laps to go in Stage 1.

3:05 p.m.: Hamlin, Keselowski, Blaney, Kyle Busch and Logano make up the top five coming out of the second caution with just 17 laps to go in the stage.

3 p.m.: Second caution. We’re at our second caution after Joey Gase spun out his 28 car; Corey LaJoie barely avoided him.

2:48 p.m.: Coming out of the caution: Hamlin in the lead, followed by Kyle Busch, Blaney, Christopher Bell and Byron in the top five.

2:45 p.m.: Then there’s Harrison Burton, making his Talladega debut, dragging a fuel can with him from out of pit row.

2:43 p.m.: Hamlin, Kyle Busch, Blaney, Byron, Kurt Buch, Austin Dillon and Blaney all pit under the competition caution.; Truex did too, and will move to the back after speeding on pit row.

2:31 p.m.: Larson is done for the day. Times like these you really miss being able to get out onto the track before the race. Could have helped his team notice something with the car:

2:30 p.m.: And now there’s Wallace in the lead! Excellent driving by him to go from worst to first. Kevin Harvick, Ross Chastain, Tyler Reddick and Chase Elliott round up the top five, respectively.

2:26 p.m.: Meanwhile, Larson’s car is smoking; he tried to rejoin the race but is now heading to the garage just nine laps into Talladega.

2:25 p.m.: Bubba Wallace has made up considerable ground after getting moved to the back of the lineup, and is currently in fifth place.

2:23 p.m.: According to the Fox telecast, all the Toyota cars who moved back initially passed inspection — but on the starting line, NASCAR officials apparently saw something they didn’t like with the contouring of the cars on the driver’s side, moving everyone but Kyle Busch back. A little more detail:

It was an A-Post infraction on the cars that are dropping to the rear: Hamlin Truex Bell Wallace and HBurton (not Suarez) now all to rear for unapproved adjustments

2:22 p.m.: Kyle Larson has already pitted with temperature issues. Kind of early for that, but we’ll see how that plays out.

2:20 p.m.: William Byron and Logano are trading between the first and second-place spots one lap into the race.

2:19 p.m.: All Toyota cars except Kyle Busch (ninth in the lineup) will move to the back due to unapproved adjustments. That includes pole leader Hamlin and Truex Jr. Incredible.

The green flag for Sunday’s NASCAR Cup Series race at Talladega Superspeedway is scheduled to wave shortly after 2 p.m. ET.

Here’s the complete starting lineup for the GEICO 500 without qualifying: