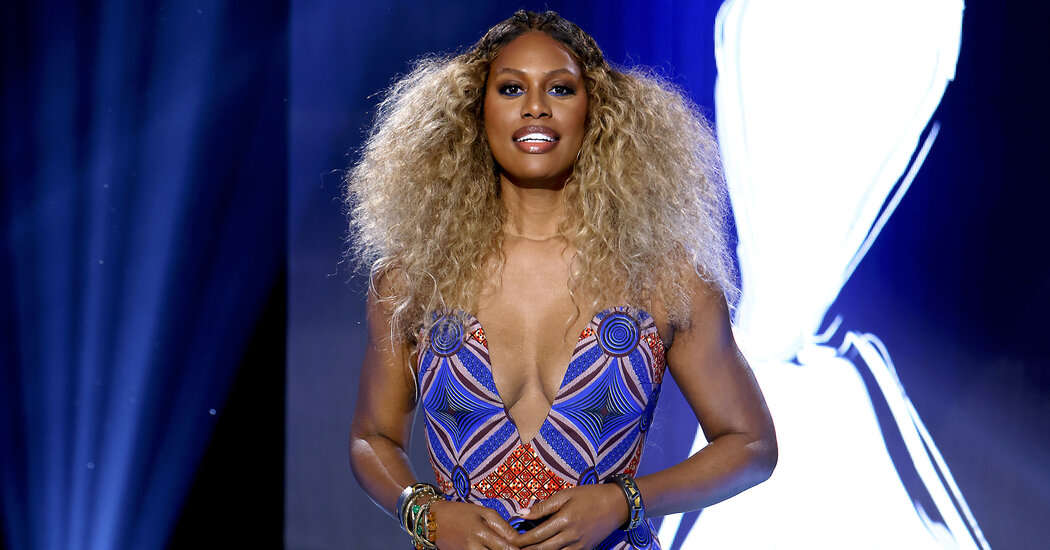 Ever since she appeared at the Golden Globes via remote camera in a regal red gown by Thai Nguyen, because “we should have a fashion moment,” Laverne Cox has been a pioneer of the virtual red carpet. Here, she explains why she believes in the power of dressing up even in a pandemic — and why a statement gown can say be a lot more than just “glam.”

You recently hosted the Essence Black Women in Hollywood Awards, and even though it was pretaped, you wore not one but three outfits. Why?

I think it’s become de rigueur when you host award shows to change clothes a few times. I wore all Black designers. And I have to credit my stylist Christina Pacelli for coming up with that idea.

Why did you decide to make that statement with your clothes?

A lot of it is about access. It is about elevating talent. I think when we change the material conditions of Black people’s lives, we lift everyone up. I think about my own journey in fashion. For many years not so many people wanted to dress me. I’ve never been sample size. I’m a Black woman, and we know certain houses don’t tend to dress Black women.

But then the dresses were also just amazing. We wanted to do a lot of color and print because after the year that we had, we wanted to do something optimistic and hopeful and said that we are coming out of all of this into something new.

Some people may feel that after this traumatic year, getting dressed up seems inappropriate. How do you respond to that?

I think we have to be able to hold two contradicting ideas. We have been through hell, and we are deeply traumatized collectively, globally. I know I’ve needed escape from that. And red carpets and fashion are an escape. They are a fantasy. I think that is what people need: beauty and art and whimsy.

I don’t think we can go back. I think this past year has forever changed us. The red carpet has always been an opportunity for me to talk about issues that are important in the world. In 2019, there was a really important case that was going to the Supreme Court that affected L.G.B.T.Q. rights in employment. And we used the red carpet as an opportunity to let everyone know. I am political, but I love fashion, and I love fun, and bringing all these things together is really, really important in terms of me being all of who I am.

Do you get any pressure to wear big names because they’re offering you money?

No, not me. Maybe other folks. I’m not a sample size, and most of the times that I’ve done red carpets I’ve had to wear custom pieces. And there weren’t a lot of designers who had the bandwidth to make custom pieces for us. But we’ve gotten to work with incredible designers who saw something in us, like Marc Bouwer and Michael Costello, Christian Siriano.

Do you ever get nervous about wearing a dress that could be seen as risky?

I don’t think you get anywhere playing it safe in life. And I certainly don’t think you get anywhere in fashion playing it safe. So I think it’s about taking risk and having fun. If it doesn’t work, it doesn’t work. It’s just clothes. Right? If you make the worst dress list, that’s OK. I’ve had moments when I looked back, and what was I thinking? But we learn from it.

The Oscars are coming up. Do you think people are going to take risks on the red carpet?

I think folks are going to go for it. I think it’s going to be fun. But I think we have to understand now that we have to be engaged. And when we engage, we can actually make change. We’ve seen it. And so in every aspect of life, we can have fun, but we can also be inspired, and we can lift everyone up.

“Promising Young Woman,” a movie you were in, is nominated for five Oscars, including Best Picture. Can you give us a clue about what you might be wearing? I know you are attending from home since Covid rules say only the person nominated can go, but are you getting dressed up?

It’s my first Oscars, so I’m excited to do my at home glam. I’m wearing a piece that was just used in a designers runway show. I had a fitting a couple of days ago. If I’m not gasping when I put it on, it’s not something I should wear. But I put the dress on, and I was gasping.

Do you think we should stop asking about what designer an actor is wearing on the red carpet?

There’s so, so much work that goes into a look. This is the sad thing about there not being red carpets. It’s a whole cottage industry of stylists and hair and makeup people. I think we can celebrate that and also do something else. I can shout out the designers that I’m wearing and also talk about something that is important to me.

It’s a really important historical moment, in terms of civil rights, voting rights, working class people having some dignity and being able to make a living wage. At this point I think we need the whimsy and fantasy, but we also need the grounding of not forgetting what is at stake in the world.

This interview, part of the @nytimesfashion On the Runway series of Instagram Live conversations, has been edited for clarity and condensed.