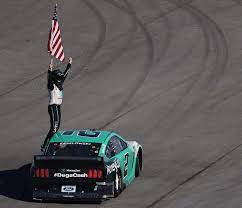 Note: Race extended three laps past its scheduled 188-lap distance due to a green-white-checkered finish.

The next event on the NASCAR Cup Series schedule is the Buschy McBusch Race 400 on Sunday, May 2 at Kansas Speedway in Kansas City. The race begins at 3 p.m. EDT with live coverage provided by FS1 and SiriusXM NASCAR Radio.