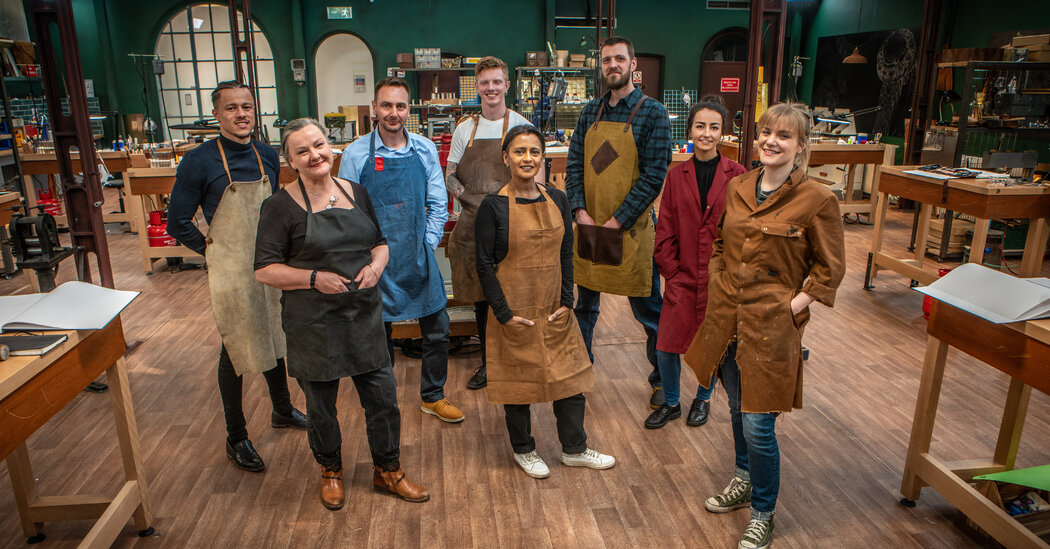 LONDON — For eight little-known jewelers, it was a chance to get a handcrafted pendant in front of not only a BBC audience, but also Queen Elizabeth II.

Each one had just four hours to produce a winning piece — and try to stay in the competition.

Those were just a couple of the goals for contestants in the first episode of “All That Glitters: Britain’s Next Jewelry Star,” the BBC’s latest attempt to duplicate the runaway success of “The Great British Bake Off,” a TV show that has been described as a key to understanding middle-class Britain.

We’ve already had “The Great British Sewing Bee” and “The Great Pottery Throw Down.” But in this version, the “Glitters” competitors — ages 23 to 56 — tackle two challenges in each of the six hourlong shows: to create a mass-market item, like a set of three silver bangles or a pair of gold hoop earrings, and to produce a custom design that fills a client’s need, like a replacement for a stolen engagement ring or something for a drag queen to increase the drama onstage.

The program is a way to highlight and honor jewelry, said Solange Azagury-Partridge, a British jewelry designer who is one of the program’s judges. “I don’t like it when jewelry is referred to as an accessory,” she added in an interview. “Personally I think it’s the main attraction on any person, really.”

During each show, Ms. Azagury-Partridge and her fellow judge, Shaun Leane, also an expert jeweler, discuss their favorites in the mass-market challenge. Later, the custom client chooses the winner of the bespoke challenge (and gets to keep the selected creation). And to ensure there’s plenty of tension, the judges also name a “jeweler of the week” — and send one contestant home.

In the initial episode, which aired April 13 in Britain, the “Glitters” competitors strove to please the judges. But when one contestant made a trio of silver bangles that he described as Bauhaus-inspired, Ms. Azagury-Partridge, a self-taught jeweler and a former creative director at Boucheron, described them as “a little bit boring. Sorry.”

During the program’s introduction, Mr. Leane told viewers that he was looking for “sexiness” in the contestants’ creations. His own work is quite well known for that effect.

Mr. Leane spent almost two decades collaborating with Alexander McQueen, creating startling runway pieces like a coiled corset and a neckpiece of pheasant claws and hundreds of Tahitian pearls. (The corset sold for more than $800,000 at Sotheby’s in 2017.)

The show’s host is the transplanted Canadian comedian Katherine Ryan, who, in the first episode, tried to encourage a goldsmith born in Sri Lanka, urging her to muster up the confidence of a “straight white man.”

“Think of Boris Johnson,” Ms. Ryan said. “How pleased he’d be with himself right now. He’d be like: ‘Nailed it.’ ”

The contestants hammer and solder away in a workshop crammed with tools — including sharp saws and live flames — at the Birmingham School of Jewelry, set in the historic Jewelry Quarter of that English city. Today the neighborhood is filled with shops and cafes, although visitor guides say about 40 percent of all British jewelry is still made there. And during the program’s introduction, Ms. Ryan described the area as “home to more jewelers than anywhere else in Europe.”

In the first week’s custom competition, a proud son identified only as Ben asked the contestants to make a pendant necklace for his 75-year-old mother, Andy, whom he described as an “aging hippie.” He wanted her to have something special for a visit to Buckingham Palace to receive an award — becoming a member of the Most Excellent Order of the British Empire, or M.B.E. — in recognition of the years she spent fostering children.

Mr. Leane said the contestants should produce a three-dimensional form, something with “a real personal quality to it.”

And Ms. Azagury-Partridge explained that a pendant is “a small piece of sculpture that needs to be beautiful from every single angle” and that the best kind of bespoke would be “a fusion between the jeweler and the client.”

She also elicited nervous chuckles from the competitors by reminding them that “the queen has some of the finest jewelry in the world, so no pressure there.”

Of the eight creations, Ben ultimately chose a pendant of silver wings with a dangling copper-lined dome that had stars on its reverse side, made by Daniel Musselwhite, 40, from Frome, England. (He also was named jeweler of the week.)

And the episode ended with images of Ben’s mother receiving her award from the queen in March 2020 — with the wings on full display.

Tom Holland Knows That Everyone Needs One Great Leather Jacket

Secrets To Make A Strong Business Case For Microlearning Platforms