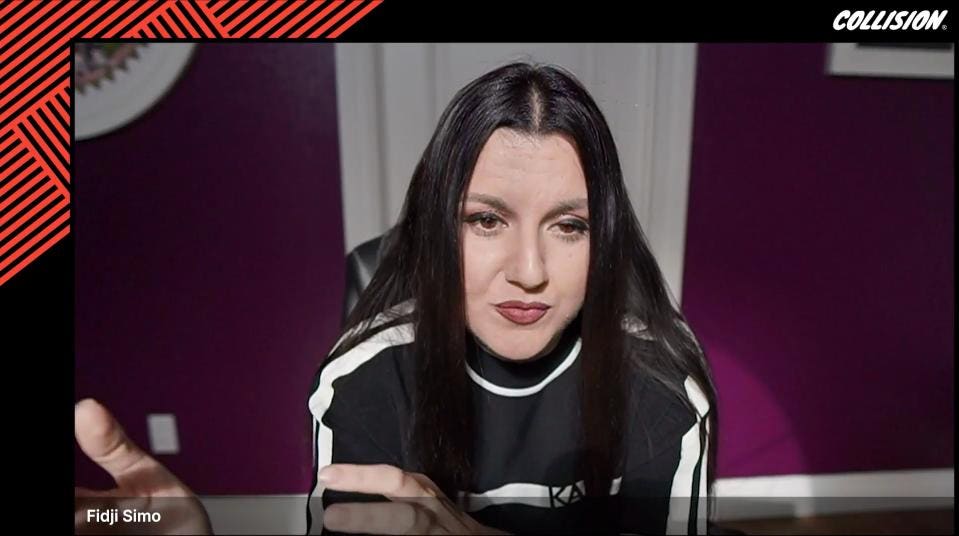 After years of inviting us to mouth off online, Facebook wants us to use our mouths directly.

Monday, the social network announced a set of audio features that aim to make the spoken word a major part of the Facebook experience.

And Tuesday, Facebook app head Fidji Simo offered more detail about these plans in two appearances at the Collision conference—even as other speakers at that online event offered reminders of Facebook’s past missteps with social media.

Simo pitched these coming features—sound-effects tools for Facebook users to play with, short-form “Soundbites” that they can record and share, the ability to find and play podcasts in the Facebook app, and live audio rooms in Facebook and Messenger—as Facebook’s response to people wanting to see each other’s faces less often.

“We’ve seen the rise of audio experiences over the last couple of years on all of the platforms,” Simo told Bloomberg social-media reporter Kurt Wagner. “But in the last year in particular with the pandemic, we’ve seen people turn to audio experiences, really because they want a meatier way to connect to others that doesn’t create all the video fatigue that I think we all have.”

Many of Facebook’s rivals have been thinking along similar lines. Spotify has been investing lavishly in its podcast business, Apple AAPL announced its own premium podcast platform Tuesday, and the early success of the live-audio-room app Clubhouse has already spurred Twitter to offer its own version of the concept, Spaces.

Simo said Facebook could integrate all of these different forms of audio. For example, a creator could elect to record an audio room to turn it into a podcast, then share snippets of it as Soundbites.

Or as she said in a subsequent Q&A session Tuesday: “This space is really primed for reinvention, because it’s currently very fragmented.”

Wagner asked Simo about Facebook’s history of copying features from competitors—see Instagram cloning Snapchat with Stories and then mimicking TikTok with Reels.

“Clubhouse has done something amazing,” Simo said. “I know how hard it is to create a new social format.”

But, she added, Facebook can bring these features to a vast universe of built-out communities. And it will provide tools to help creators make some money from the audiences for their spoken-word output: “We very well know that these formats don’t work if creators don’t have a path to monetization.”

In both Collision appearances, Simo emphasized how Facebook can leverage its accomplishments in artificial intelligence.

In the Q&A, for example, she noted how its coming sound-studio tools will bring the equivalent of Messenger video filters (themselves a response to Snapchat’s comparable feature) to your voice. For instance, they’ll be able to make you sound like a radio announcer or an alien or lend you what Simo called “audio green screens,” background soundscapes like a beach or a forest.

Simo told Wagner that Facebook will use its existing speech-to-text technology to provide live captions and to listen for violations of its content policies.

“We’re going to auto-detect any violation of our community standards using our artificial intelligence technology directly on the audio content,” she said.

Listeners can also report violations of Facebook’s rules, she added: “We have a team of human reviewers who are going to review that in real time to make sure this content really abides by our standards.”

But Facebook’s past attempts to stop real-time cruelty on its platform have come at the mental health of moderators who must watch people at their most vile. There’s no reason to think this pattern won’t repeat with live audio.

As Facebook’s former chief information security officer Alex Stamos, now director of Stanford University’s Internet Observatory, said in a Collision Q&A Tuesday: “With hundreds of years of people being bad to each other, we need to take account of that when we design new systems.”

After years of failing to heed that lesson, Facebook last year began assembling a “Responsible Innovation” team to audit new features for their abuse potential. Simo did not address this in her appearances, but Thursday Facebook spokesperson Che’von Lewis confirmed in an email that this group has been working on the new audio features.

One of Stamos’s Stanford colleagues, research manager Renée DiResta, gave Facebook some credit for learning between the 2016 and the 2020 elections.

“When there were instances of false and misleading content that were going viral, they were quite quick to act,” she said in a Collision panel Wednesday. “They were very very much more active in 2020.”

You have to hope that these lessons learned will also inform Facebook’s ventures into live audio. Because the enormous scale of this social network makes it unlike any other in one key way: What happens badly on Facebook doesn’t stay on Facebook.