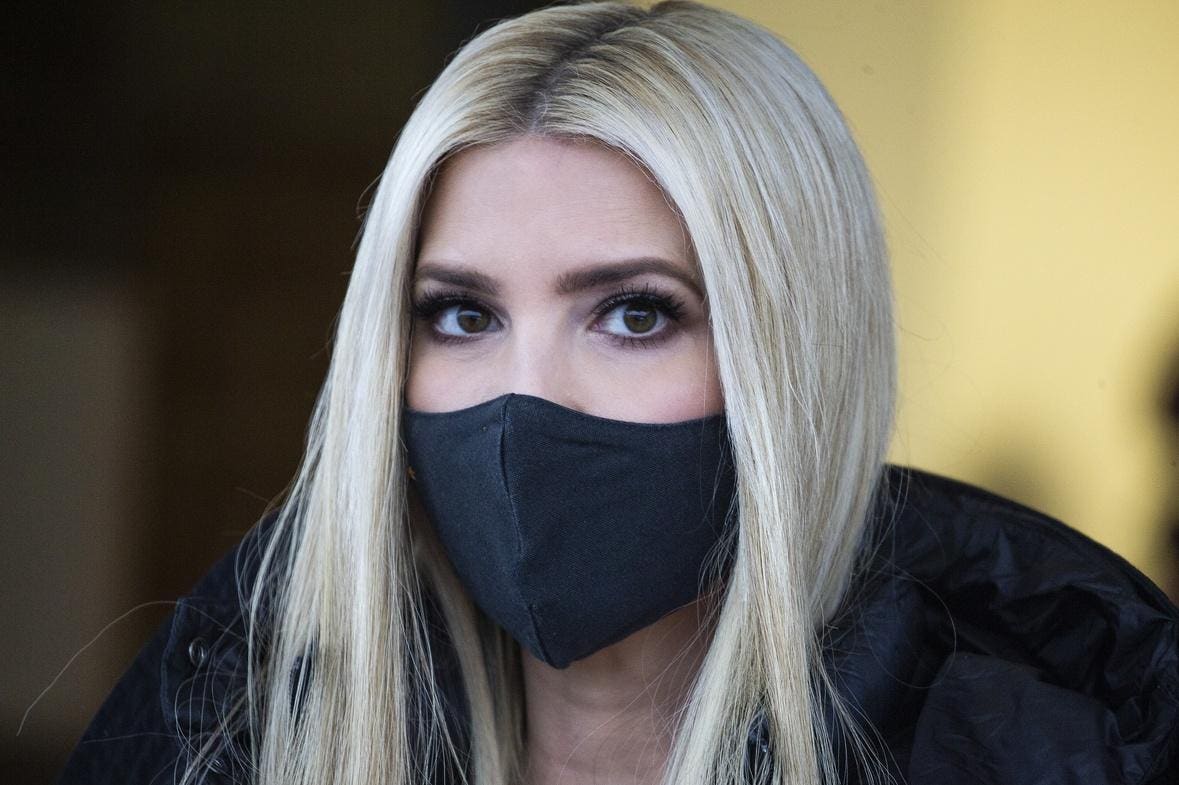 After a rather lengthy absence from Twitter and other social media, Trump has returned.

No, not former U.S. President and current Mar-A-Lago resident Donald Trump. Rather it was the daughter of Donald and former “advisor to the President” Ivanka Trump who posted photos of herself along with the words, “today, I got the shot!!! I hope that you do too! Thank you Nurse Torres”:

No ALL CAPS. No “I’m your favorite such and such.” No slams on anyone else. Just what appeared to be a positive public health message encouraging Covid-19 vaccination during the Covid-19 coronavirus pandemic.

Interestingly, Trump the Ivanka didn’t mention the name “Covid-19” in the tweet, choosing instead to use the generic term “shot,” which in theory could have referred to any kind of vaccination or even a shot of vodka or a basketball shot. Not mentioning “Covid-19” may not seem like a significant omission. But throughout 2020, Trump the Donald often avoided using the real name “Covid-19” when referring to the disease and the virus and instead tried using his own names like the “China virus” or the “kung-flu.” Now calling Covid-19 such things isn’t simply like calling Justin Bieber something like “the Biebs” or . A study published in the American Journal of Public Health found an association between use of the words “China virus” and anti-Asian sentiment on Twitter. All the while Ivanka Trump didn’t exactly make a significant effort to correct her father.

Nevertheless, some expressed hope that Trump the Ivanka’s vaccination would convince those who follow her and Trump the Donald to get the Covid-19 vaccine:

As our PHICOR team study published in the American Journal of Preventive Medicine showed, to really quell the pandemic in the U.S. this year would require a majority of Americans to get vaccinated. However, according to a recent NPR/PBS NewsHour/Marist Poll, 49 percent of Republican men and 34 percent of Republican women said that they do not plan on getting vaccinated with 47 percent of Trump’s 2020 supporters indicating that they would refuse the Covid-19 vaccine. So the road “back to normal” in the U.S. may go through Trump supporters, so to speak.

The question, though, is how much sway does the Trump family really have over their supporters. Are Trump followers in actuality following Trump or has Trump been simply following, amplifying, and supporting what Trump followers already believed prior to Trump’s running for and becoming President? In other words, who’s following whom? The following response to Ivanka Trump’s tweet in the words of Maroon 5 may make you wonder:

And Tina Nguyen, a reporter for Politico, posted a scrolling compilation of “no”, “pass” and other similar responses to Trump the Ivanka’s Instagram post:

Meanwhile, take a wild guess as to how some QAnon followers responded to Ivanka Trump’s photo. The answer rhymes with “conspiracy World Series.” Yep, conspiracy theories. Arieh Kovler created some montages of some QAnon follower claims, including allegations that Trump the Ivanka was, drum roll, please, faking it:

As you can see, some pointed out that Ivanka Trump didn’t actually mention the word vaccine in her post. Then there were the posts wondering whether Trump the Ivanka had actually been executed:

Yes, executed. After all, as one of the posts questioned, “would Ivanka dress like that?” Surely, execution is the first thing that comes to mind when someone who’s worn a $12,888 gown is seen in just jeans and T-shirt. Isn’t that what’s meant by the saying “jeans to die for,” or the “war” in “wardrobe?”

Not everyone echoed the “fake vaccination photo” or “Trump executed his daughter” conspiracy theories. Some simply expressed disappointment that the Trumps are “pushing the jab agenda” and lamented that “noone is coming to save us:”

Those resisting vaccination and QAnon followers weren’t the only ones criticizing Ivanka Trump for her photo. She also got backlash from those who felt that the First Daughter didn’t do nearly enough to get her father to respond appropriately to the pandemic last year such as:

It’s not clear how many people will choose to get the Covid-19 vaccine simply because Ivanka Trump did so and posted her vaccination photo on social media. Nevertheless, as long as someone ends up changing his or her mind, her photo will have had an impact, as the following tweet from @davidmweissman emphsized:

And that’s how you make a positive impact on social media.