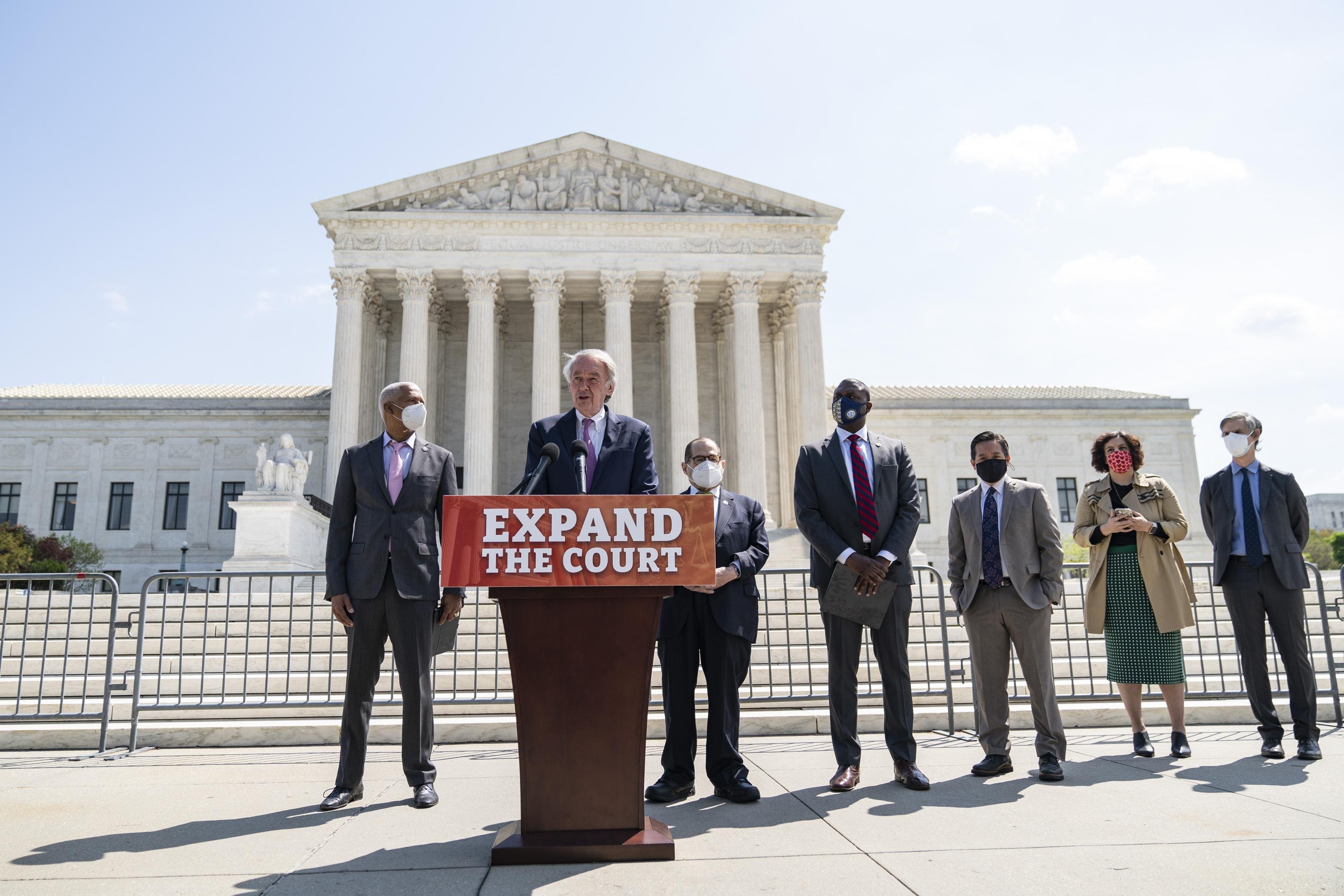 A week after President Joe Biden signed an executive order to establish a commission to study whether the Supreme Court of the United States (SCOTUS), the highest court in the land, should be expanded, progressive Democrats introduced legislation to expand the size of the court to 13 justices.

Despite the fact that House Speaker Nancy Pelosi (D-California) has said she has no intention to bring the issue to the floor, the debate has taken on a life of its own on social media where the hashtag #ExpandTheCourt has been trending. Numerous groups and individuals were quick to note that the size of the court has changed over the course of our nation’s history.

Lawmakers supporting such an expansion were quick to head to Twitter and other platforms.

Rep. Mondaire Jones (D-New York) (@RepMondaire) tweeted, “Our democracy is under assault, and the Supreme Court has dealt the sharpest blows. To restore power to the people, we must #ExpandTheCourt.”

Other Democratic lawmakers soon offered their own arguments for expanding the size of the court from nine justices to as many as 13.

“Expand the Supreme Court like our democracy depends on it, because it does,” wrote Rep. Cori Bush (D-Missouri), (@CoriBush)

Much of the rational of the calls to expand the court came from the fact that former President Donald Trump had appointed three justices, shifting the balance.

Rep. Rashida Tlaib (D-Michigan) (@RashidaTlaib) was among those who saw the shift as a serious problem to our democracy. She posted, “Republicans damaged the Supreme Court and stole the majority. It’s time to #ExpandTheCourt to ensure we restore power to the people and bring justice to the people.”

There were many equally opposed to the calls to pack the court, with the same suggestions that democracy was at stake.

“Remember this day. Democrats are packing the Supreme Court because they know they can’t push their unpopular agenda through Congress,” warned Rep. Ken Buck (R-Colo.) (@RepKenBuck)

Former White House Press Secretary Kayleigh McEnany (@kayleighmcenany) offered her thought on the issue, writing, “And just like that congressional Democrats advocate for destroying two American institutions: the Supreme Court and the Filibuster. The Electoral College is next. Power at any and all cost!”

There were also a few who took a more bi-partisan stance, focusing on what any increase in the number of SCOTUS justices could mean if and when Republicans are back in power.

“What happens to the Supreme Court if seats are added and Republicans win the White House and Congress in 2024? They will, of course, add more seats. This idea just seems an extension of a race to the bottom that has been happening for decades over judicial nominations,” tweeted Shon Hopwood (@shonhopwood), associate professor of law at Georgetown Law.

Political commentator Steven Crowder (@scrowder) was as direct, “Packing the Supreme Court will fundamentally change our government. If you’re okay with that now, are you okay with that when the OTHER SIDE is in power?”

A Religious Debate Not About Religion

Politics and religion are two things that aren’t supposed to be discussed in polite company, and social media has shown that it is anything but polite of late.

“People should remember that this type of heated discussion actually goes back to Roe V. Wade, when Republicans made it a wedge issue within the court,” explained Matthew Schmidt, Ph.D., professor of political science at the University of New Haven.

“People fell on one side of the issue or the other, and that has been true since the 1980s,” added Schmidt. “That particular issue made the Supreme Court a lever point for manipulating political identity. It has remained that lever point ever since, but the issue goes beyond abortion. It started to bring moral and religious values into the debate, even when it was a secular issue. As a result people treat these debates like they are religion.”

As the nation remains so politically divided every argument is now treated like a war between right and wrong.

Schmidt added that we’d likely still have this divide even if social media wasn’t here, but one notable difference could be in the hostility.

Past debates could often remain a debate among family and friends, and other issues outside that debate could bring people together. Now with issues such as the packing of the Supreme Court debated on social media there is no common ground.

“It isn’t just clear that social media can make these debates worse, but it is certainly easier for everyone to participate,” noted Schmidt. “An important distinction is that you can see them as a human being when you’re sitting across the table, and you don’t hate someone for thinking differently. When you strip that context way you get a fire and brimstone version that our politics have become when debating issues like the Supreme Court.”