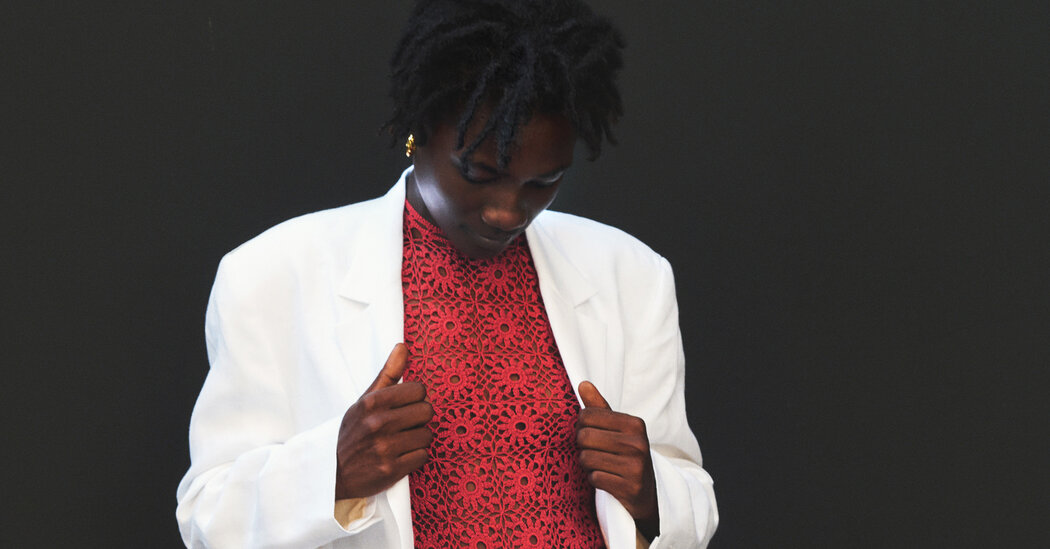 As a teen in 1990s Kingston, Jamaica, the fashion designer Rachel Scott was acutely aware of the tension between the decorum dictated by her Jesuit high school, where skirt lengths were checked on a regular basis, and the liberating dancehall scene she was swept up into at night. “There was this idea of being proper and having to present a certain way in the daytime — it was ridiculous,” says Scott, 37, speaking over Zoom from the lush green garden of her family’s house in Kingston, where she is visiting. But the soundtrack of her adolescence — the hip-swaying hits of local artists like Lady Saw, Shabba Ranks and Chaka Demus & Pliers that she heard at parties — left the more lasting impression. “Dancehall will forever be influential to me,” she says of the genre, which has roots in music of the African diaspora. “It’s like this explosion of exuberance.”

Scott explores this juxtaposition between dancehall and colonial notions of propriety, along with wider ideas about the fusion of Jamaican and European cultures, in her new women’s ready-to-wear line, Diotima. (The label takes its name from the ancient Greek priestess and philosopher Diotima of Mantinea, whose theories on beauty resonated with Scott.) Her brand’s first collection, which will be available next month, establishes a language of long-line proportions and understated, often natural materials that the designer intends to explore anew each season. She cites a well-cut white linen suit as one of the pillars of her debut offering: the style was a staple of ’90s-era Jamaican musicians like Ranks, and Scott offers a version updated for today with soft shoulders and pleated pants. “I was trying to get this element of dancehall, but I didn’t want to do it in a nostalgic way,” she says.

Some of the more voluminous styles were inspired by early 20th-century images of women washing clothes by a river, their full skirts gathered up in their hands. “I wanted to pay homage to that strong Caribbean woman,” says Scott. There is a sense of polish, of primness even, that runs through the collection and harks back to her school days — she has softened the overt sexiness of a backless orange dress with risqué cutouts at the waist by employing delicate techniques like draping, pleating and ruching — but it is consistently subverted: a black pleated mid-length skirt, for example, has a thigh-high slit. Similarly, a range of swimwear styles — including a white crocheted bikini and a ruched fluorescent tangerine one-piece — are a departure, Scott concedes, from the more demure offerings she’s created for the New York brand Rachel Comey, where she is currently vice president of design. “I have this joke with Rachel that her taste in swimwear is north of the Equator,” she says with a laugh. “But I needed to cut the pieces higher on the leg and show some butt.”

Scott left Jamaica 20 years ago to study studio art and French at Colgate University in New York, though she was sure she would one day return home. “It might sound lofty, but this idea of nation-building has always been very important to me,” she says, citing the legacy of the former Jamaican prime minister Michael Manley and the work of his mother, the sculptor Edna Manley, as foundational to her sense of cultural responsibility. First, though, in 2006, she moved from New York to Milan to study fashion design at the Istituto Marangoni, and after graduating she stayed in the city to hone her skills at Costume National, working in the brand’s rigorous atelier under the founder Ennio Capasa. “I remember Ennio stopped me in the middle of a fitting once and said, ‘I’m going to teach you how to hold a pin,’” she says now with fondness. After four years in Italy, Scott returned to New York to take a design role at J. Mendel, and in 2015 she joined Rachel Comey.

Last year, the pandemic and the growth of the Black Lives Matter movement prompted her to reflect on what starting her own project might look like. “Being in this industry as a woman of color, I used to have this idea that if one person spoke about Jamaica, then I’d lost my chance, but last year I realized that’s a ridiculous idea,” she says. “I thought about how my perspective has been influenced by my time in Italy, my background in French and philosophy and how that could come together and add something new and unique to the discussion.” One aspect of her vision was trying, in a modest way, to shine light on Jamaican crafts, such as crochet, which is a recurring motif in the collection. Her research also led her to local practices, including Hardanger embroidery, in which white linen or cloth is adorned with lacelike patterns in white thread, and the method of dyeing textiles using heartwood from logwood trees, which imbues fabric with a purplish tinge.

Beyond the mass-produced pieces sold in the country’s souvenir shops, crochet in Jamaica remains a very real domestic practice that has been upheld for generations, and Scott found eight women, most of them based on the island’s north coast, in the Saint Mary and Saint Ann parishes, to realize her designs. “The craft was always a creative outlet for women to work on at night,” she says. Whether alone or operating in circles, the women produced Diotima’s fitted T-shirts in floral-patterned crochet (in either red and black or white) and tank tops with large, intricate black-and-white doilylike adornments, as well as filmier crochet embellishments for silk organza skirts and dresses. This handiwork, then, is not only an aesthetic choice but also an expression of cultural identity and an authentic creative partnership. “I’m always asking myself, ‘How do you pay respect to the people that continue these crafts without exoticizing them?’” Scott says. “It’s important for me to keep this as a collaborative relationship.” Indeed, working side by side with local artists is something she has wanted to do since leaving Jamaica and, though she’s still based in New York, it’s also its own form of returning home. As Scott says, “I have this sense of duty to participate.”

Friend to Friend: These Are the Only Hair Dryers That Won’t Inflict More Damage