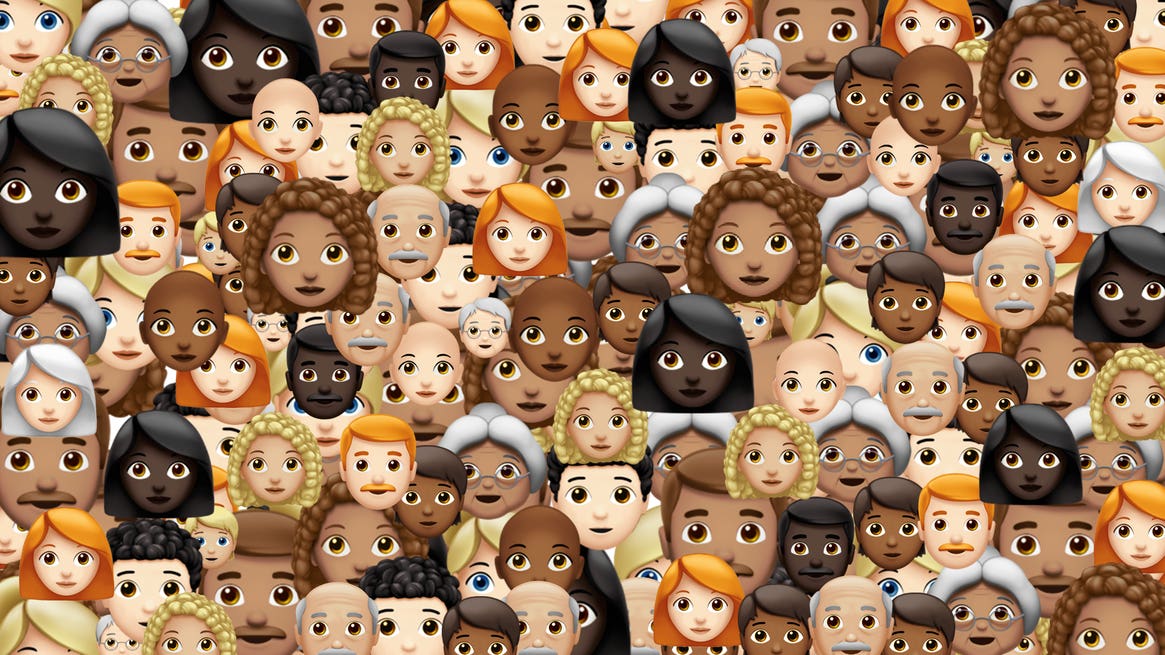 Have emoji devolved, flattened or elevated language? Or wait — are they their own language, or an augmentation of our existing one?

While by definition, ‘emoji’ is the combination of two Japanese words: e, ‘picture’ and moji, ‘character’, they act as the substitute of words (🏡 = a house) and as an extension of expression (💀 = I’m dead from laughing or shock). So, are emoji pictographs or gestures? Both. But their real value stems from the latter.

According to Vyvyan Evans, PhD, an expert on digital communication and author of The Emoji Code: The Linguistics Behind Smiley Faces and Scaredy Cats, “In the spoken medium, gesture, facial expression, body language and speech intonation provide a means of qualifying and adjusting the message conveyed by the words we utter.” In other words, a smirk, rolled eyes, folded arms, or jazz hands layer critical nuance, enriching what’s said, and supplying more information for interpretation. This data is not secondary to the message, in many cases, it’s the message itself.

In one estimate, 30-35% of derived meaning from daily social interactions come from language, while nearly 70% comes from nonverbal — particularly visual — cues. Coincidently, in another study, it was found 70% of emoji usage directly relates to emotional expression.

So while emoji are predominantly used as supplemental personal touches in sterile, digital formats which strip subtlety, they are also inherently static and standardized. While growing slowly, emoji are a set number of characters. While Apple and Twitter each have their own styles, these platforms are beholden to the Unicode Consortium, which determines what emoji make their way to your keyboard. For a tool meant for expansion of expression, there is a mounting tension considering this tight oversight.

In a new study by Adobe which surveyed thousands of emoji users around the world, only half (54%) feel their identity is adequately reflected in current emoji options. Further, the majority (83%) agree emoji should continue to strive for more inclusive representation of users. This sentiment is unsurprisingly driven by Gen Z and Millennials who rely upon emoji to get across what’s on their mind.

If emoji are used to share our nonverbal sentiment, then they should embody the “speaker”, reflecting who is communicating. Customization is one solution — an approach we’ve already seen progress. In 2015, the Unicode Consortium unveiled skin-tone modifiers. However, very quickly, those five options were determined to be still too limiting. Since, hair styles and hair color modifiers were introduced, along with non-binary emoji in 2019. There’s room to grow there too.

Because emoji are inherently tied to personal identity — this is me giving a thumbs up or a shrug — the more accurate they are in representing us, the more effective they ultimately are. Seventy-nine percent of Gen Z currently customize their emoji, and 74% wish they had even more customization ability to better reflect themselves. One driver here can be that Gen Z values the fluidity of their identity and widely shared, fixed options like emoji are limiting. Apple’s Memoji and Snap’s Bitmoji are alternatives, but they’re not as mobile across various platforms like emoji are.

A questioned posed here is: will emoji ever be inclusive and accurate enough? We can keep requesting customizations until it’s literally just us. If an advantage of emoji is its simplification, adding boundless, microscopic iterations contradicts its shorthand. The emoji search is already laborious enough. How much can we demand from emoji?

However, today, there’s still progress to be made.

With their findings, Adobe has partnered with Emojination, a young grassroots organization whose motto is “Emoji By The People, For The People.” The non-profit is dedicated to helping emoji seekers navigate the arduous Unicode approval process and usher in more representative emoji around the world. So far, Emojination has successfully guided over 100 emoji proposals, including interracial couples, hijab, piñata, dumpling, and tamale.

When it comes to the increasing demand for personalization, “I think people are trying to say the word ‘I’, which is hard to say in emoji,” says Jennifer 8. Lee, co-founder of Emojination. “We think it’s important to have the voice of the people on issues of Big Tech when determining policy.”

But this voice goes beyond representation of cutesy pictographs. Lee continues, “Emoji is just a topic that ordinary people can get excited about, but we really could have their voices for issues on data privacy, harmful content moderation, labor, and regulatory regimes. I think we provide a good model for people who can play an interface between companies and ordinary individuals who are passionate in terms of helping come up with policy or standards.”

Emoji creation and people-powered policy reform are not mutually exclusive. It was also found that 70% of emoji users believe that inclusive emoji can help spark positive conversations about important cultural and societal issues.