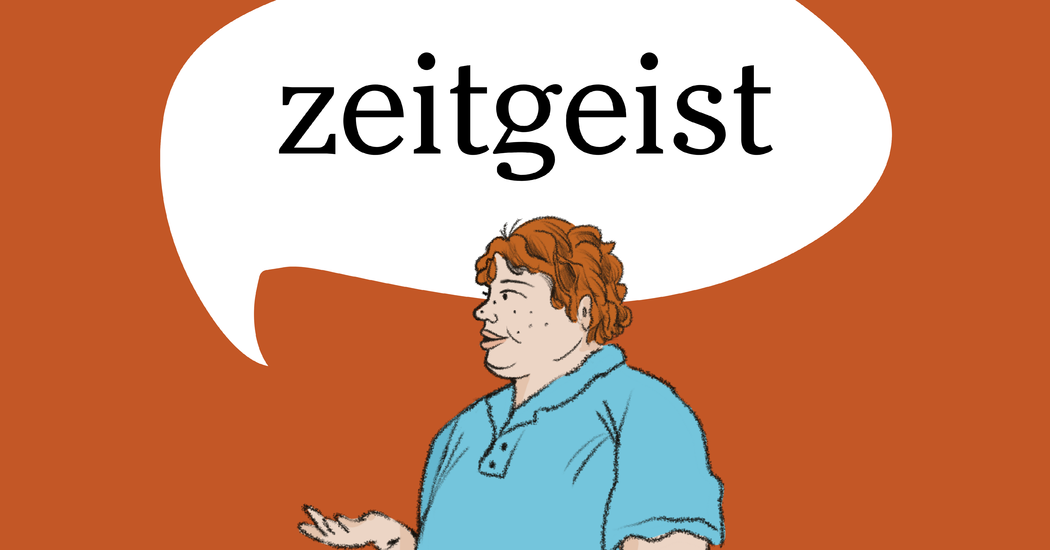 : the spirit of the time; the spirit characteristic of an age or generation (often capitalized: Zeitgeist)

The word zeitgeist has appeared in 76 articles on NYTimes.com in the past year, including on Dec. 10 in “The Highly Unlikely Yet Totally Predictable Return of Uggs” by Max Berlinger:

Ms. O’Donnell, whose first memory of the brand is Pamela Anderson wearing Uggs with her red “Baywatch” swimsuit (Ms. Anderson, an animal-rights activist, has since renounced the boots), calls the classic boot a “cultural icon.” That sort of talk is often ballyhoo, but in this she’s not wrong. Uggs permeated the zeitgeist in a way few other footwear brands can claim.

Oprah Winfrey included them in her annual “Favorite Things” episodes, starting in 2003, creating a frenzy. Celebrities often wore them between takes while filming, which continued to raise their profile. And starlets helped forge an image of them as glamorous and casual in the early part of the century. Originally they were worn by surfers to keep their feet warm after a morning of wave-riding, giving them instant street (beach?) cred. Still, without constant tending and innovation, a brand built around one signature item can easily get stuck in a rut.

“Uggs will always and forever remind me of coming of age in the early aughts, seeing them on celebrities like Jessica Simpson on ‘Newlyweds’ or Paris Hilton shopping at Kitson,” said Tyler McCall, the editor in chief of the Fashionista website. “Lately, though, they also bring up images of a very specific, cool-art-scene kid.”

Can you correctly use the word zeitgeist in a sentence?

If you want a better idea of how zeitgeist can be used in a sentence, read these usage examples on Vocabulary.com.