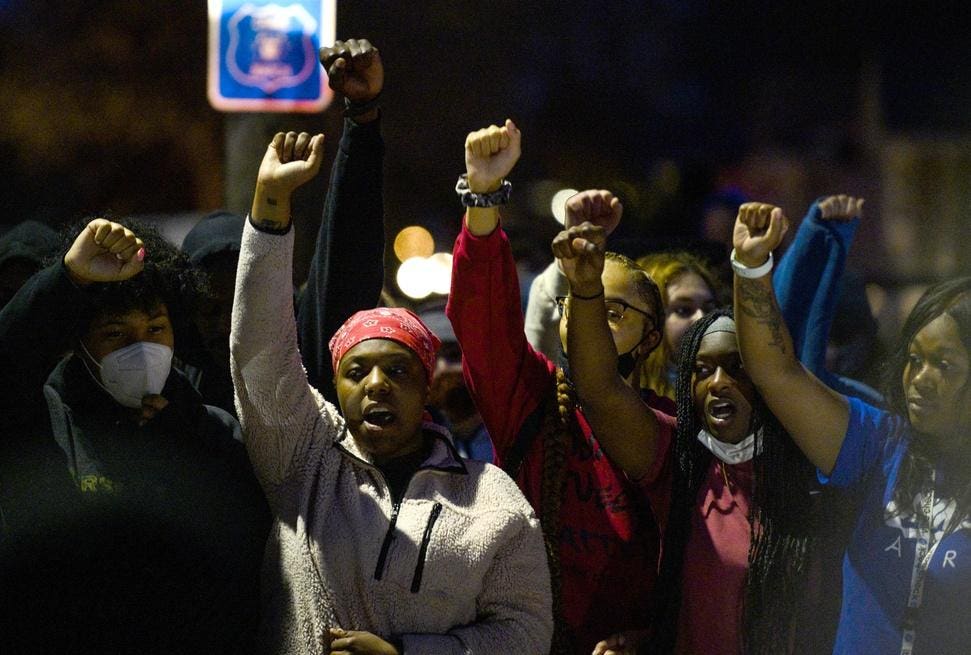 Even as one of the most high profile criminal cases involving a former law enforcement officer continues to unfold in Minnesota, two other recent police-related events are now in the spotlight this week. Both have gone viral on social media.

The first involves a black man, Daunte Wright, who was shot and killed by a police officer during what should have been a routine traffic stop. In that incident on Sunday, the police officer drew a handgun instead of a Taser, resulting in Wright’s death. The tragic chain of events, which sparked protests in Brooklyn Center, Minnesota on Sunday evening, took place just 10 miles from where former police officer Derek Chauvin is on trial for the killing of another black man, George Floyd.

In the footage, the Army officer, who was in uniform at the time, can be heard repeatedly asking why he was stopped and when he refused to step out of his SUV he was subsequently pepper-sprayed by Gutierrez.

The pair of incidents ignited Twitter on Monday, with many calling for police reform, while a few also took to the platform to defend the hard job that law enforcement has today.

Response To Another Tragedy

The hashtags #DuanteWright, #ItwasaGun and #Manslaugher were widely shared on Monday afternoon. Activists, celebrities, political pundits and lawmakers quickly voiced their concerns over the tragedy. A common refrain was how a trained police officer could make such a heartbreaking mistake, which resulted in Wright’s death.

Pastor and author/activist Bishop Talbert Swan (@TalbertSwan) shared a similar sentiment, “Lives depend on a cop knowing the difference between a gun and a taser.”

TV producer Andrew Kimmel was among those who posted a very similar stance: “If you can’t distinguish between your gun or your taser, you shouldn’t be a cop.”

Go To the Video

Since last week, the video footage involving Caron Nazario in Virginia has been widely shared, and even resulted in the firing of Officer Gutierrez. It has been tagged with various hashtags including #PoliceBrutality, #PoliceReformNOW and #armyveteran.

Human rights attorney, Qasim Rashid (@QasimRashid) was among those who recapped the event with some of the footage. He has had nearly 26,000 likes while he has been retweeted more than 13,000 times:

By Monday afternoon “Cops” was among the most trending topics across Twitter. While much of the discussion was around police reform, there were some that actually offered support for law enforcement.

“What is so hard about complying with law enforcement? These criminals all add insult to injury by acting shady when police are attempting to do their jobs (a very dangerous job). Being asked to show your hands and exit your vehicle is for YOUR safety and the officer’s safety,” wrote @goodblackdude.

The fact that so many have been so vocal speaks to the power of social media following these events. It was 30 years ago in March 1991 that footage of the Los Angeles police beating of Rodney King by amateur videographer George Holliday sparked outrage.

That footage was eventually widely shared with the mainstream media, but today it is now possible for such video to be quickly disseminated across social media even as events are unfolding. The question is how such videos shared on social media could lead to social change.

“It took longer for the Rodney King footage to get air time, but not all that long and when it did it was ubiquitous,” said Steve Blum of Tellus Venture Associates.”The George Floyd video was distributed more quickly but I wonder if it had more cumulative effect over time, despite being even more disturbingly dramatic. The Rodney King video was the beginning, or at least the watershed moment, of crowd sourced video of police misconduct. It was ever more shocking as a result.”

However, as has been seen with other issues, the battle lines remain firmly drawn on the social platforms. While activists may be vocal, it isn’t clear if this leads to real change. In the case of Lt. Nazario it may have resulted in the firing of a police officer who certainly seems in the wrong.

“There’s little or no discussion across ideological divides on social media, regarding policing related issues or anything else,” admitted Blum.

“Social media has become the megaphone that reaches into most households,” said technology analyst Roger Entner of Recon Analytics.

“It raises awareness, shows people that they are not alone, helps them connect, or deafens people and makes them less sensitive,” Entner explained.

Whether social media can actually bring wider change is not as clear.

How to Support Your Go-To-Market Strategy with SEO via @sejournal, @TaylorDanRW