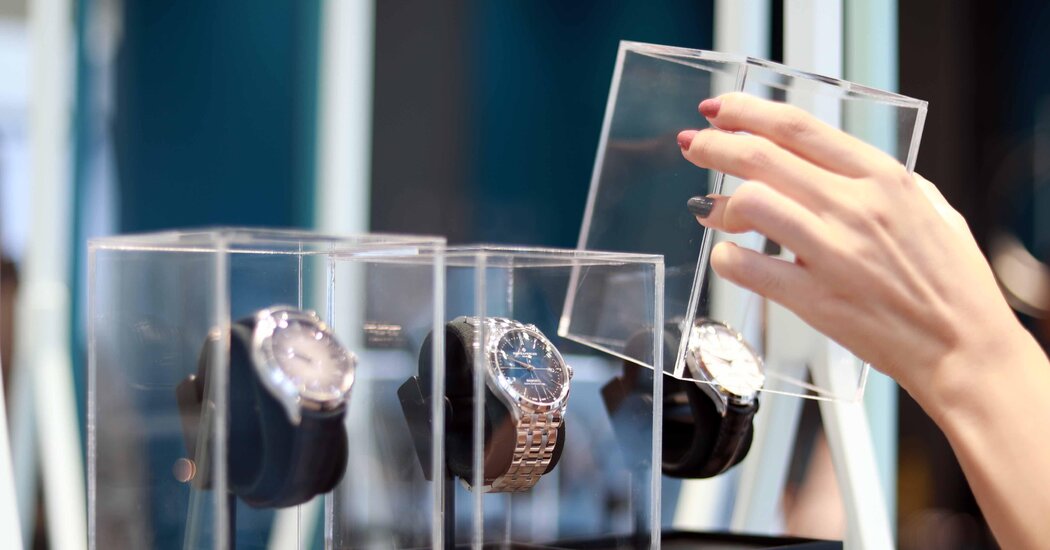 No one seems quite sure just how many people will turn up at Watches and Wonders Shanghai, the in-person, invitation-only, five-day watch event that begins April 14. But those attending will get the kind of hands-on experience that the watch industry has been longing to give this past year. Participating brands — 19 are scheduled — say the absence of the usual Swiss watch fairs this spring has only highlighted the value of such events, so the companies have been insistent that, when conditions allow, large gatherings of watch brands under one roof will return. For now, however, here are more new pieces from the show and beyond.

In what has become a rather monochromatic world, a splash of pigment or a thread of artistic invention provokes fresh interest, even if we cannot see the real thing just yet. A list of watch brands experimenting with color or playing with gems would be just about all-inclusive, but some do it with more pizazz than the rest. Exotic materials, métiers d’art and ties to couture abound — and, if in doubt, there are always diamonds.

The three watches in the Lady Arpels Ballerines Musicales collection were inspired by the three-act ballet “Jewels,” created for the New York City Ballet in 1967 by George Balanchine, a friend of one of the Arpels. Matching the ballet, there is an emerald model for Fauré, a diamond piece for Tchaikovsky and this ruby piece for Stravinsky. When activated, the watches chime a simplified arrangement of the ballet’s music and Van Cleef’s hallmark ballerinas dance. The time, incidentally, is shown (loosely) by a retrograde scale at the top of the dial. Spellbinding.

Gem, when pronounced with a French accent, sounds remarkably like “j’aime” or “I love.” That is the euphonious legerdemain behind Dior’s helter-skelter new watch, dreamed up by Victoire de Castellane, artistic director of Dior Joaillerie. Stylistically, Gem Dior obeys few of watchmaking’s conventions. The stark asymmetry of its eight-side case is said to mirror the natural geometry of uncut minerals, while the strips of ornamental stones that make up the bracelet are a colorful tribute to Christian Dior’s habit of pinning fabric swatches from his couture creations onto sheets of paper. The seven watch designs are paired with a collection of fine jewelry pieces.

Moser, as the house is known, is not one to decorate its watch dials with familiar details like numerals, preferring instead to let bold colors or exotic materials do the talking. Its latest continues the theme by laying a bald slice of the semiprecious stone tiger’s-eye across the dial. It comes in lots of colors, including this red Ox’s Eye, and is said to protect its wearer, while communicating self-confidence and prosperity. The only dial interruptions are the hands and the aperture at 6 o’clock that opens the watch’s one-minute flying tourbillon, a Moser specialty. All that is cloaked in 40 millimeters of red gold and limited to 50 pieces.

Graff can be a high-end watchmaker and high-end jeweler, often at the same time. This year’s Abstract is definitively a jewelry piece and shows Graff’s talent not only for sourcing magnificent diamonds, but also for arranging them. Beyond an asymmetric cluster of pear-shape and marquise diamonds, it has a pavé diamond dial and a lone diamond-set lug. In total, we are looking at 13.58 carats. The four diamonds at the tail of a “trail of scintillation” are fluid, a whimsical flourish that has become a house signature. Naturally, the watch has a quartz movement, and it sits on a black satin strap.

Perhaps because it is British by name, owned by the Japanese company Citizen and powered by Swiss movements that Arnold & Son has yet to find its place among the big names of high-end watchmaking. And that pieces such as this Luna Magna don’t always get the attention they deserve. The new watch has an 18-karat red gold case and a starry aventurine dial, but the magic is in its astronomical, “tridimensional” moonphase. Despite the complexity of a display that shows a spherical moon under an advancing cover, it needs correcting by just one day every 122 years. Only 28 will be made.

New watch companies were two-a-penny during the 2010s, but few have punched as hard and as quickly as the high-end, low-volume Czapek & Cie. Founded in 2015 and named after a 19th-century Polish watchmaker who once briefly partnered with Antoine Patek, the Swiss company recently extended its bijoux portfolio with the Antarctique, a steel sports watch of sorts. This year it is adding the 10-piece Emerald Iceberg, a watch powered by Czapek’s dashing in-house SXH5.01 automatic caliber. The watch’s eye-catching dial is varnished by hand and has the hue of rare green icebergs, a natural phenomenon thought to be created by ancient iron oxide dust.

Steel of the century

Ten years ago, roughly half the watches exported by Swiss watchmakers were cased in steel, according to the Federation of the Swiss Watch Industry. By 2020, that split had jumped to more than 60 percent. Unlike gold, which comes in many colors, steel is largely fashion proof, a material for the ages. Customers turn to it for assurance — and so do brands.

There has been steady progress at Rolex, which this year updated its Explorer II adventurer’s watch — powering it with the highly accurate Calibre 3285 automatic and detailing it with Rolex’s Chromalight blue luminescent material. Any changes in the overall look are hard to discern, although Rolex says the case and bracelet are both new designs.

Material experiments in watchmaking are largely confined to cases, straps and movement parts. Of late, some have begun toying with lume, finding novel ways of making their watches glow in the dark. Bell & Ross continues its Full Lum series, coating the dial of its otherwise conventional BR V2-94 steel chronograph in green and yellow Super-LumiNova.

Longines says that when it ran an in-house competition in 1955 to find a name for its new watch, it had 450 proposals. The winner was Silver Arrow, a name plucked from the racing world, but attributed to a model with closer ties to aviation. This handsome revival says little about either world, but is none the worse for it.

Like so many of its peers, Carl F. Bucherer is not afraid to turn the clock back in search of new watch designs. This handsome piece is a fresh spin on a model introduced around 1950, although the brand seems unsure when exactly. It has a twin-counter chronograph and a calendar function that needs adjusting only in leap years.

Britain’s most powerful watch brand has spent the pandemic adding the finishing touches to its 35,000-square-foot watchmaking center in Henley-on-Thames. At the same time, it has added two 60-piece limited-edition chronographs to mark the 60th anniversary of another British success story, the Jaguar E-Type. Each watch comes with a Bremont rally timer and an E-Type driving experience.

Japan’s elite watchmaker, Grand Seiko, has produced a watch for our times — or, at least, for spring. The company says this green-dial automatic picks up on the vernal equinox, or Shunbun, as it is called in Japan. It has a pink GMT hand, inspired by the yamazakura, a type of cherry blossom that flowers pink at this time of year.

Here, “Rad” is short for “radiations,” used by Blancpain to recall a version of its totemic Fifty Fathoms diver’s watch that was produced in the mid-1960s. That watch was finished with nonradioactive luminescence, a novelty at the time. The original is a collector’s favorite; limited to 500 pieces, this might become one, too.

Here’s a thing: a Tissot mechanical watch created for the mass market that has been lapped up by aficionados. With more than a nod to 1970s steel sports watches, the PRX automatic has movie-star looks but a very reasonable price. Forget competing with tech giants and their smartwatches, Tissot — just do more of this.

The first watch to carry the first new mechanical movement created by Citizen in 11 years is another that, from the outside at least, owes a debt of gratitude to steel sports watches of the 1970s (including Citizen’s own). Inside it is Caliber 0200, a chronometer created in partnership by the Japanese company and its Swiss movement subsidiary, La Joux-Perret.

In the 1960s, the race to build an automatic mechanical chronograph was motivated by what watchmakers saw as the imminent obsolescence of their hand-wound equivalents. More than a half a century on, nostalgia appears to be driving a return to the form: Hamilton’s latest chronograph, pegged to an archive piece from 1968, features a new hand-wound chronograph caliber.

Collaborations between traditional watch companies and streetwear brands may still be unusual, but, as Seiko has already proved, they can be highly effective. Its latest is with Evisen, a Japanese skate brand founded in Tokyo in 2011. From it comes this 500-piece Sushi, which has what the brand calls a “grains of rice” rubber strap and a dial design inspired by seared tuna.

Maurice Lacroix announced a new in-house movement last week at Watches and Wonders Geneva, a confident move from a brand that has struggled for profile in recent years. The watch it powers, with its open dial, is not as universal as this new GMT version of its Aikon family, a steely all-rounder that is a good look for the brand.

While there’s a comfortable uniformity about much of what comes out of Switzerland (see those steel sports watches), there is an irrepressible counterculture at play, too. Watchmaking can be disruptive, and often it is most memorable when it is. As these suggest, the search for originality — and commercial distinction — continues.

With a central hand that tours the dial once a second, Zenith’s angular, 1/100th of a second chronograph was already a watchmaking curio. Now it has been supercharged with a 45-millimeter titanium case, a 12-side ring sitting under the bezel (here in polished rose gold) and a package offering a bracelet and two additional straps.

All-ceramic watches are no longer a novelty, but the category owes its popularity to the experimentalism of Rado, which pioneered ceramics in watchmaking almost 40 years ago. The company has now fashioned its retro Captain Cook in the material, adding a skeletonized movement with antimagnetic parts, an 80-hour power reserve and 300 meters of water resistance.

New colors should never be headline news, but then each time Ressence tinkers with the hue of its Type 2N, we are reminded just how smart it is. The watch’s standout feature, no matter the color, is its inventive light-powered e-Crown system that connects its mechanical movement to a smartphone — and therefore the correct time, all the time.

Founded by the great watch designer Gerald Charles Genta in 2000, the Gerald Charles brand recently was revived by fresh management. This year, its story begins with a 25-piece time-and-date yellow gold version of Mr. Genta’s Maestro, a dress-cum-sports watch now with a bespoke, high-end automatic created by the movement specialists Vaucher.

The French company Reservoir is the latest to tap into the world of extreme sailing. This bronze-case version of its retrograde, jumping-hours watch is one of 10 pieces that spent 82 days journeying around the world with Maxime Sorel while he competed in the treacherous solo Vendée Globe race.

Not many Swiss watches owe their name to an AC/DC album, but this is one. The watch is all-black and has an offbeat, two-layer dial aesthetic created by a combination of a central hand for minutes, a retrograde 30-second counter and an off-center hour hand that sits on what the brand calls the watch’s “open gear.”