Amid a wave of bills seeking to exclude transgender athletes from sports, the National Collegiate Athletic Association issued a statement Monday reaffirming its support for transgender student-athletes competing on teams that align with their gender identity.

“The NCAA Board of Governors firmly and unequivocally supports the opportunity for transgender student-athletes to compete in college sports,” the organization said.

“Inclusion and fairness can coexist for all student-athletes, including transgender athletes, at all levels of sport,” the NCAA continued. “Our clear expectation as the Association’s top governing body is that all student-athletes will be treated with dignity and respect.”

States that pass anti-transgender bills may not be suitable locations for major NCAA events, the organization suggested.

“When determining where championships are held, NCAA policy directs that only locations where hosts can commit to providing an environment that is safe, healthy and free of discrimination should be selected,” the group said. 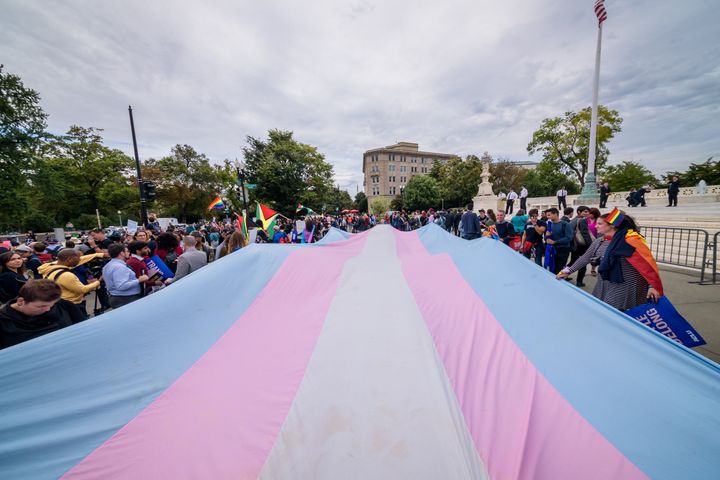 Demonstrators unfurl a giant Trans Pride flag outside the U.S. Supreme Court in 2019.

“State lawmakers take note: discriminating against trans youth is wrong, against the law, and costly,” the ACLU tweeted.

The announcement comes as dozens of GOP-led states push through legislation limiting transgender athletes from competing in sports. Three such bills passed in March alone, with proponents of the laws claiming they’re needed to ensure fair competition.

But opponents argue that such laws violate Title IX, a federal civil rights law that prohibits sex-based discrimination in schools that receive federal money. Medical experts also say there’s no evidence supporting the necessity of such a ban.

The NCAA’s statement follows comments on CNN on Sunday by Arkansas Gov. Asa Hutchinson (R), who signed an anti-trans athlete bill last month suggesting the NCAA was aligned with him on the issue. “Even the NCAA requires certain requirements before you can have trans competition,” the governor said when challenged on the state’s bill.

But the NCAA made its position clear Monday, saying its approach is simply to require testosterone suppression treatment for transgender women who wish to compete in women’s sports.