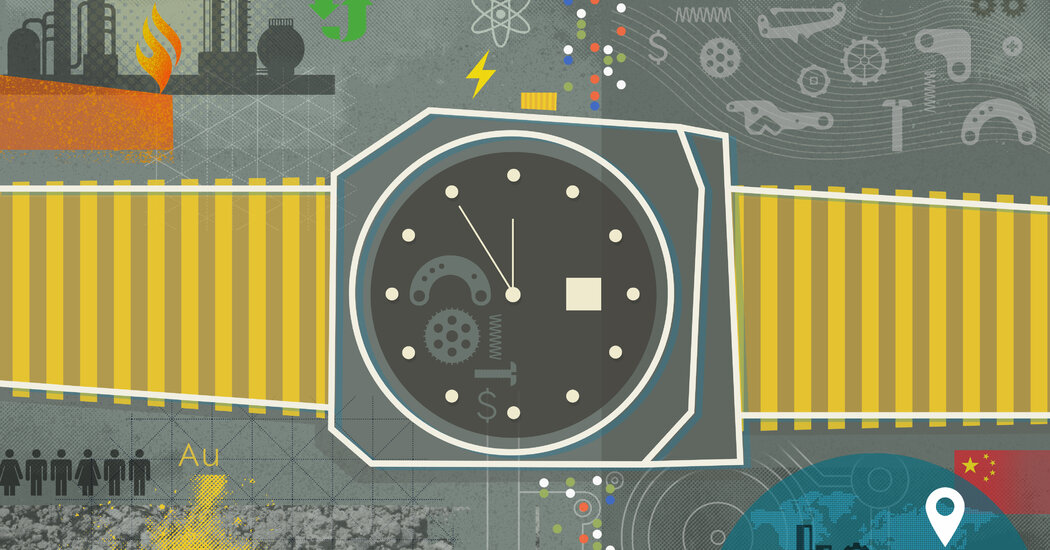 The Swiss have long had a reputation for being discreet when it comes to business. (Think banks). And their watch industry is no different.

But growing pressure for environmental and ethical accountability — from activists, investors and consumers — has convinced a few brands that it is time to reveal where they obtain some of their raw materials.

They are fighting the industry’s deep-rooted tradition of discretion, a practice born of watchmakers’ fear that identifying suppliers will reveal details of their expertise and give rivals an advantage.

Many, however, are secretive for a very different reason: They are reluctant to admit their “Swiss Made” watches contain numerous components manufactured in China. These aren’t legal concerns: Swiss law dictates that at least 60 percent of the manufacturing costs of a product must be incurred in the country for it to qualify for the label.

Rather, it is, at least in part, an issue of branding: “Swiss Made” has long been associated with quality, precision and value, and is integral to most Swiss watchmakers’ marketing strategies. Is that undermined if the products aren’t entirely Swiss in origin?

“The real transparency challenge of the watch industry is beyond those important points, the ethics of the supply chain — it is the integrity of Swiss Made,” Jean-Christophe Babin, chief executive of Bulgari, said on a video call earlier this month. “When you find watches at 500 Swiss francs [$530] that claim to be Swiss made with mechanical movements, you can reasonably believe there’s a miracle behind it. Because I’ve never been able to do that, and I am 20 years in the Swiss watch industry.”

Brands at the prestige end of the watchmaking spectrum, for whom the Swiss Made issue is less problematic because they make their own parts or buy them from Swiss suppliers, face a different challenge: the need to prove their commitment to sustainability and ethical sourcing.

They also are being driven by a number of other factors — industry changes brought about by the pandemic and digital growth, a new generation of chief executives, public pressure — to rethink long-established notions about the way they do business, including the value of collaborating with other watchmakers.

For consumers, the industry’s nascent spirit of openness means making previously unattainable information, such as where brands get their gold and how they produce their timepieces, more available. Some watchmakers are even going out of their way to share it.

During the virtual Watches and Wonders fair in Geneva that began April 7, for example, Panerai introduced the Submersible eLAB-ID, a 44-millimeter wristwatch built almost entirely from reused raw materials, including recycled Super-LumiNova on its hands, recycled silicon in its movement escapement and a recycled titanium alloy known as EcoTitanium on its case, sandwich dial and bridges.

In a news release, the brand named the nine companies that worked on the timepiece, which will remain a one-of-a-kind concept watch until 2022, when Panerai plans to release a limited edition of 30 pieces, each tentatively priced at around 60,000 euros ($70,530). “We would love to be copied and improved upon,” Jean-Marc Pontroué, Panerai’s chief executive, said during a video interview last month.

Mr. Pontroué said the value of making a recycled watch was in the ability “to make noise” around the collective effort behind it.

“The watch will be limited to 30 pieces; it will not change the life of Panerai or the watch industry,” he said. “But the idea is to create a new business highlighting these companies that can be approached by any of our competitors.”

Similarly, in November, Ulysse Nardin introduced an upcycled concept watch called the Diver Net, featuring a case and bezel made from recycled fishnets and a strap made of recycled plastic from the sea. In press materials, the company shared the names of its suppliers.

“We didn’t try to pretend we were making it ourselves,” said Patrick Pruniaux, Ulysse Nardin’s chief executive. “You have to do things that inspire others.”

That philosophy also is espoused by its parent company, Kering, the Paris-based luxury group — which also owns Gucci, Boucheron and 10 other high-profile brands — that has earned a reputation for transparency and activism in a sector not known for either quality.

Kering has gone this way, at least in part, because it has an eye on what its buyers — and potential future buyers — want.

Claudio D’Amore, a watch designer based in Lausanne, is one of the few Swiss watch executives to welcome such scrutiny. In 2016, he created a crowdfunded brand called the Goldgena Project, later renamed Code41, whose radical approach to transparency was a response to the industry’s long-simmering debate over the Swiss Made label.

Mr. D’Amore created his own label, called TTO, for Total Transparency on Origin. And Code41 is equally transparent about another sensitive topic: pricing.

On its website, the brand included a table that lists all the components and processes that went into its latest crowdfunded timepiece, the NB24 Chronograph, along with their prices and origins. For instance, the watch’s Swiss-made movement cost the company $1,056 (including taxes), while the titanium case, dial and packaging — manufactured in China — cost $167, $56 and $22. In total, the watch cost $1,474 to produce.

Below the table, the brand explained that it arrived at a retail price of $3,500 by adding what it called a “minimal markup” for profitability.

“In the beginning, some people didn’t like that we were explaining everything,” Mr. D’Amore said on a video call last month. “But we received also a lot of positive comments from people encouraging us: ‘It’s about time someone tells us how it works.’”

The most established brands in the Swiss watch trade are also getting that message.

By July, IWC Schaffhausen has said, visitors to its website will be able to click on an icon or logo on each product page for information about the steps it is taking to ensure that materials have been acquired responsibly.

The information is part of IWC’s most recent sustainability report — what’s new is how easy it will be to access online, a spokeswoman said.

Chopard is another high-profile watchmaker striving to make its business more transparent. In late February, the Geneva-based brand updated its website with more information about its raw materials, including gold from the Barequeros, a community of artisanal miners in the Chocó region on Colombia’s Pacific coast. It also posted its Code of Conduct for Partners for the first time.

And yet Juliane Kippenberg, a Berlin-based expert on mineral supply chains at Human Rights Watch, says these measures still fall short of what other sectors, such as the garment industry, are doing to implement transparency, particularly on the complex topic of gold sourcing.

“Big companies like Adidas and H&M release Excel spreadsheets where they list the names of the garment factories where their products are being made,” Ms. Kippenberg said. “But in this sector, there’s far more reluctance to do that.” (Of course, those companies aren’t immune to controversy, either; H&M for example, is embroiled in one over its cotton sourcing.)

That hesitancy may be because many watchmakers are still wary of transparency’s threatening implications for their intellectual property.

“Part of our know-how is the know and the how — why would you share it?” said Wilhelm Schmid, chief executive of A. Lange & Söhne, a prestige watchmaker based in the German city of Glashütte.

From Ms. Kippenberg’s perspective, however, the information she would like to see has nothing to do with a timepiece’s distinguishing technical or artistic details. “It’s about the conditions in which the material is mined and worked on and the actors in the supply chain,” she said. “There’s also a broader question of accountability. Transparency is the only way to ensure that human rights violations can be prevented or addressed.”

Whether they like it or not, Switzerland’s biggest watchmakers may soon have no choice.

In November, Swiss voters rejected the Responsible Business Initiative, a proposal by a civil society coalition that would have required Swiss companies to conduct due diligence on human rights and environmental risks throughout their supply chains, and publicize their reports. But a counterproposal from the Swiss Parliament that would require companies to ensure the traceability of their supply chains, and make their reports publicly available for 10 years, is expected to become law in 2022.

That means even the notoriously tight-lipped Rolex, the world’s biggest brand by sales — a Morgan Stanley report on Swiss watches published last month found that the company now has an estimated market share of 26.8 percent — will need to make its business more transparent.

“They can’t claim they’re a private company because no one’s asking for their trade secrets,” said Milton Pedraza, chief executive of the New York City-based Luxury Institute. “They will have to answer. There’s no place to hide.”

No Matter Your Budget, Here’s How You Can Support Latin-Owned Brands

24 Perfect Blue Dress Shirts to Shore Up Your Office Wardrobe