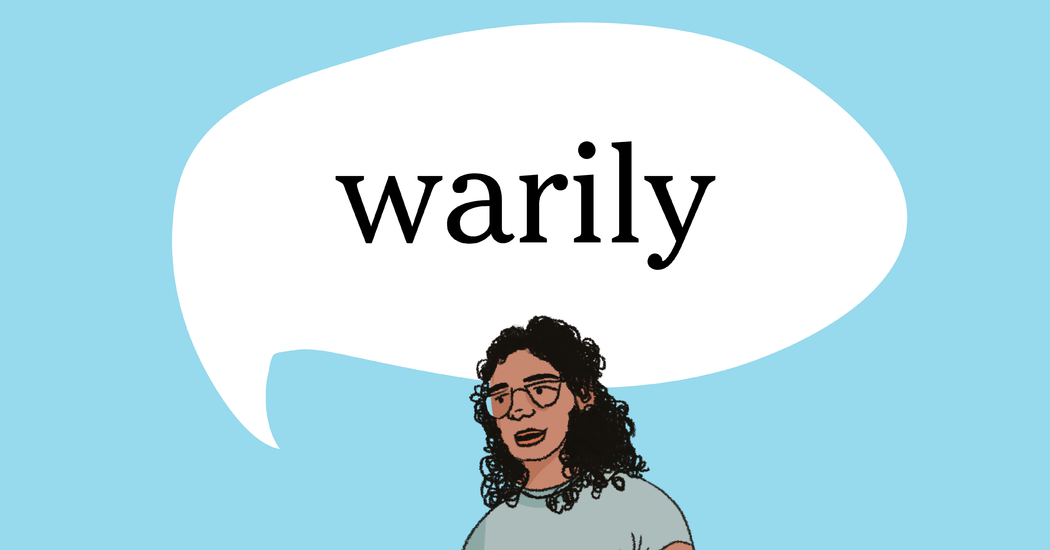 : in a cautious or watchful manner, usually on alert to detect danger or deceit

The word warily has appeared in 110 articles on NYTimes.com in the past year, including on Sept. 25 in “The Long Road to Fatherhood” by Michael Beckett:

When my son’s life was stuck in neutral last fall, I decided to take him on a cross-country road trip. I thought an adventure would give him new experiences and perspectives, open his mind to possibilities.

… Things were fine at the start. From the Statue of Liberty to the Lincoln Memorial. Through the Shenandoah Valley, Charleston and Savannah. A soccer match in Atlanta and birthday dinner in Montgomery. It was three weeks of smiles, selfies and souvenirs. It was everything I’d hoped it would be.

And then, on a steamy night in New Orleans, a snide comment from him set things off. It quickly escalated into a sidewalk scene to rival any “Real Housewives” episode. For 10 minutes we yelled at each other as tourists eyed us warily and moved out of the line of fire. We argued in disconnected bursts about respect, expectations and attitude. Finally, panting and spent, we hugged and then ducked into a nearby bar — and were soon bopping along to a tight blues band.

Can you correctly use the word warily in a sentence?

If you want a better idea of how warily can be used in a sentence, read these usage examples on Vocabulary.com.

Is It Ethical to Be a Football Fan?