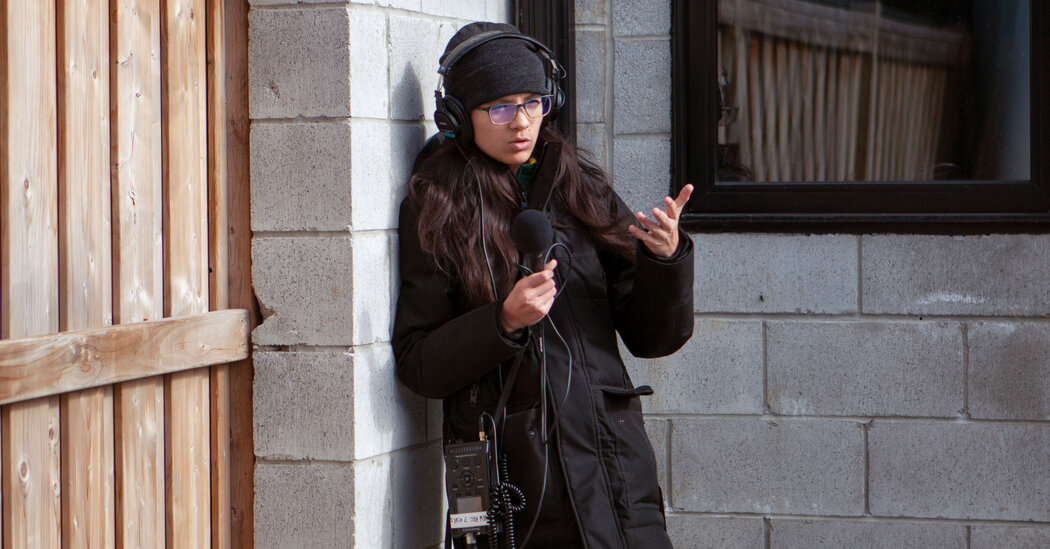 Note: Our Fourth Annual Student Podcast Contest is open from April 8 to May 18.

Have you ever wanted to create your own podcast? What would it be about? What fresh perspective could you provide on a topic? Who would you invite to be part of your show?

Podcasting isn’t only for adults: Middle and high school participants in our annual podcast contest have created imaginative episodes about the evolution of dating, a robot takeover and a nonexistent baseball pitcher. And in “These Young Podcasters Are Growing Up on Mic,” Phoebe Lett writes about some young podcasters who have been turning their curiosity into podcast episodes since childhood:

Before Tai Poole could kick off the third season of his podcast for the Canadian Broadcasting Corporation, “Tai Asks Why,” he needed to address a change in the show’s sound. Specifically, his voice.

“If you’ve been a longtime listener of my podcast, you may be thinking, ‘Hey, Tai sounds a little bit different this year,’” the 14-year-old host said in the season’s opening episode. “My voice is changing. Even I can hear it. As much as I may try to fight it,” Tai let out a wistful sigh — “I’m growing up.”

Mirroring the industry they joined at a very young age, Tai and other child podcasters have matured on mic. Some have dropped out as they got older, like the host of “Chloe’s Friendship Circle,” who ended her three-year career in 2018 at the tender age of 8. But podcasters like Tai have no plans to forsake the medium.

CBC Radio listeners were introduced to Tai as a 9-year-old “math whiz kid” in 2016. That’s when he appeared in three episodes of the show “Sleepover,” in which strangers were brought together for a night to learn about each other’s challenges and offer advice from their own perspectives. Tai was one of the few kids featured in it, and his precocious charm and insatiable curiosity stood out enough that the show’s producers tapped him to host “Tai Asks Why,” in which he asks family members, experts and scientists life’s big questions, like, “What happens after you die?” He was 11.

Tai explains how his show has evolved over time:

“I noticed that my questions I was asking seemed to have changed,” he said. “My attitude was different, too. I’m kind of like, what’s up with that? So I thought, let’s do an episode about how my questions are changing and how my teen brain is changing.”

Where his 11-year-old self asked existential questions like, “What is love?” and “Why do we dream?” the Tai on mic today is narrowing his focus to the world around him — turned upside down by Covid-19. So Season 3 has dealt with questions like, “Why are viruses so good at what they do?” “How do I know what’s true on the internet?” and “How much screen time is too much?”.

The article also introduces readers to Nate Butkus, the 10-year-old host of “The Show About Science”:

Nate’s preternatural scientist’s mind has served him well for over 85 episodes, in which he’s interviewed nearly as many scientists on topics, including nanotechnology, 3-D printed organs and black holes. Each episode of his show is led by his own curiosity. He comes up with something that interests him — like cosmic microwave background or quantum mechanics — and then searches on Google for scientists in that field.

… Over the years, Nate has had to learn to ask questions from his audience’s point of view. “It’s something we’ve had to talk about as he’s gotten smarter and smarter,” his mother, Jenny Butkus, said. “Like, ‘Hey Nate, remember, just because you know the answer doesn’t mean everybody else does.’”

But that doesn’t mean Nate’s interviews are dumbed down. The surprise in his expert guests’ voices can often be heard after a smart question comes their way. The reaction was epitomized at the end of the Watergate episode of Nate’s spinoff series, “The Show About Politics & History.” Leon Neyfakh, the creator of the podcast “Slow Burn,” which took on that scandal, apologized: “Sorry I assumed you knew less than you do. You know everything!”

About two-thirds of podcast hosts are male. Perhaps 80 percent are white, ratios that become starker among the most downloaded podcasts, those that generate the most ad revenue. If you read through comment threads about the best voices in podcasting, white voice follows white voice. (MVPs? Phoebe Judge and Roman Mars.) This makes any conversation about voice also a conversation about power.

What is podcasting missing? Whose voices, and what stories, do you think are being left out or overlooked? What unique perspective could you provide as a podcast host? How could your podcast draw upon your own voice, experiences or identity?

3 Challenges That Can Accompany Remote Work

Drought and Abundance in the Mesopotamian Marshes