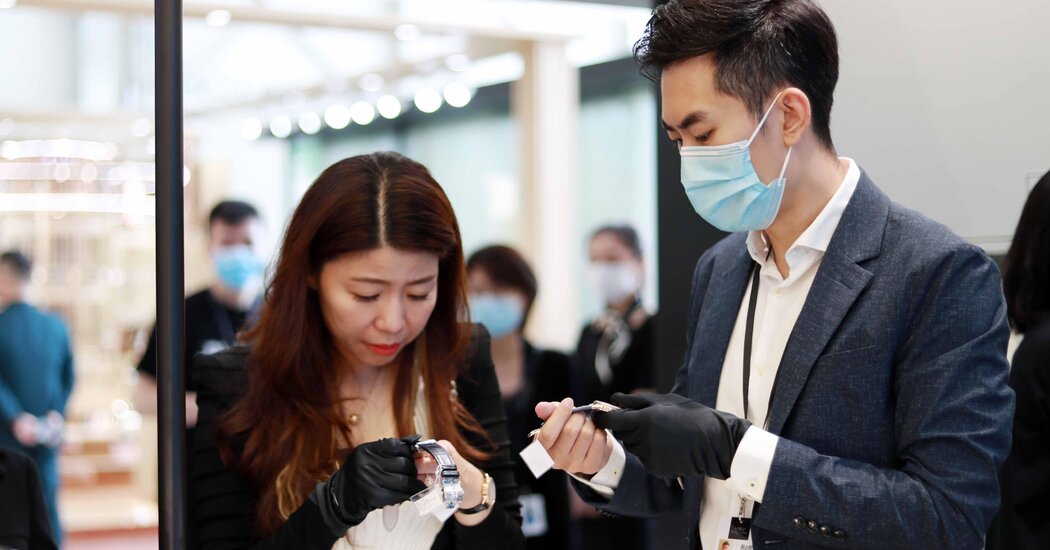 More than two years have passed since consumers, retailers and members of the media last gathered in Switzerland for the watch trade shows once known as Baselworld and the Salon International de la Haute Horlogerie, or S.I.H.H.

Both have since changed their names: the former to Hour Universe (now planned for sometime this summer in Basel) and the latter to Watches and Wonders, which this year is split into two events.

Although the first will be entirely digital, it is pegged to Geneva and will run from April 7 to 13. That schedule includes webinars, brand keynote presentations, panel talks and, of course, lots of new watches presented by an elite collective of 38 brands, including Rolex and Patek Philippe.

The focus then will switch to Shanghai, where 19 brands plan to convene at the West Bund Art Center for a five-day live event. And the names behind the invitation-only program certainly will be hoping to beef up the story of an industry battered by factory and store closures during the last 12 months.

Yet, as these watches show, the pandemic has done nothing to dent ambitions.

For the major brands, the process of creating a luxury watch is a lengthy one, almost irrespective of how complex the timepiece may be. It often takes years. Many of the Watches and Wonders showstoppers were in development long before talk of social distancing and national lockdowns entered the vernacular. Credit therefore to those who pressed on, regardless.

Bulgari’s quest for world records marches on with a seventh title, claimed in seven years. The latest crown toppler is this automatic perpetual calendar version of the Octo Finissimo, which at 5.8 millimeters thick becomes the world’s thinnest of its kind, usurping Audemars Piguet’s 6.3-millimeter Royal Oak equivalent. Half a centimeter is mechanical light-years, delivered by a barely there 2.75-millimeter-deep movement. The core model will be in titanium, but there also will be a 30-piece platinum edition.

For this 90th-anniversary year of its evergreen flip-case watch, Jaeger-LeCoultre has pulled out all the stops, coating all four of the watch’s available surfaces in a smorgasbord of 11 complications. On the list are relatively familiar high-end add-ons such as a perpetual calendar, a flying tourbillon and a jumping hour, alongside the more abstruse draconic lunar cycle showing the height of the moon and the anomalistic lunar cycle showing its apogee and perigee. Only 10 will be made.

Concept only; it will not be sold

Jean-Marc Pontroué, Panerai’s chief executive, said it would take five years to deliver a fully recycled mechanical watch. Not two years later, the brand is introducing a concept piece that Mr. Pontroué said was made of 98.6 percent recycle-based material (by weight). The Submersible eLAB-ID’s case, dial and bridges are made from a trademarked recycled material called EcoTitanium, while the “lume” and silicon escapement are said to be 100 percent recycled. A landmark piece in the story of sustainable watchmaking and recycled luxury.

The latest one-off grand complication to emerge from Vacheron Constantin’s elite Les Cabinotiers division is a piece with a double-axis tourbillon inspired by the form of an “armillary sphere,” a revolving scientific instrument that shows the world’s Equator, tropics and other celestial circles. The watch’s perpetual calendar is given a secondary role, while the lead is taken by a pair of three-dimensional moon phase displays, for Northern and Southern Hemispheres, that also indicate day and night against 24-hour scales.

The realignment of the watch fairs has seen the big beasts of what was Baselworld migrate to Watches and Wonders, in Geneva. On April 7, Rolex is to announce its novelties through the Watches and Wonders online platform. Chanel, Chopard, Tudor and the LVMH brands Louis Vuitton and Hublot also now sit under the Geneva banner, alongside Richemont brands such as Cartier and IWC. Patek Philippe is to present its new pieces next week.

One suspects that post-pandemic economics will limit the arrival of all-new watch lines, even though working from home may have given the industry’s creatives unprecedented thinking time. Either way, the belated unboxing of the Hermès H08 line, bumped 12 months by the pandemic, has an energizing novelty to it. The company says the “sports lifestyle” collection, which has a bespoke case shape and typography, is intended to lure men away from mainstream dial names. The line includes this 39-millimeter all-black graphene automatic.

Pandemic notwithstanding, Cartier’s watch division has been revived in recent years by a renewed focus on its montres de forme, or shape watches, and the sidelining of its experimental fine watchmaking offshoot. That trajectory will no doubt continue with this overdue revival of the Tank Must, a dandyish concoction that first appeared in 1977. The all-steel group includes a capsule collection of three quartz models with dials in green, blue and burgundy. Expect the burgundy, shown here, to become a style council favorite.

A year after Hublot made the belated decision to integrate a metal bracelet into its flagship Big Bang sports watch, it has taken the ambitious step of shaping it in translucent sapphire crystal. During LVMH Watch Week, which was online in January, the company announced a tourbillon watch with a tangerine-orange sapphire crystal case, and hot on the heels of that comes this model with a case and integrated bracelet in colorless sapphire. To protect the ghostlike appearance, Hublot narrowed the bracelet pins, so they obscure the view through the watch as little as possible.

While TAG Heuer headlines circle around heritage pieces such as Carrera and Monaco, the brand’s story is every bit as dependent on the stalwart Aquaracer, a universal diving-cum-sports tool watch designed to tick as many watch wardrobe boxes as possible. To indicate its importance, the company has given the entire line a major overhaul, retaining familiar cues such as the 12-sided bezel, while slimming the whole thing down. The halo piece is this 43-millimeter brushed titanium automatic.

Comparisons between Tudor and its parent company, Rolex, are inevitable, given that the two evolved in parallel. Fifty years on from Tudor’s first chronograph, it is introducing this steely diver’s watch with a racing aesthetic that bears more than a passing resemblance to Rolex’s auction darling, the vintage Paul Newman Daytona. Fans will love it.

Fashion and music’s obsession with ’90s influences is slowly making its way into watchmaking, now accelerated by Chanel’s four-piece J12 capsule collection, said to be inspired by what it’s calling the Electro culture of the period. Dial side, the view of the Electro Star is exclusively diamonds, but tilt it and a rainbow of sapphires appears down its flanks.

Experimental fine watchmaking is alive and well at Louis Vuitton’s La Fabrique du Temps facility in Switzerland. This jacquemart watch (one with an automaton that strikes the hour) features a snake and a skull that animate on demand to chime and reveal the time in a mechanical dial dance that lasts an astonishing 16 seconds.

Fine watchmaking, gem-setting and responsible-sourcing themes combine in Chopard’s latest Impériale. The watch’s case is made of what the house calls ethical 18-karat white gold and then paved with brilliant-cut diamonds, while the movement offers a moon phase complication. The watch’s aventurine dial is decorated with the Northern Hemisphere’s five main constellations.

The celebrated German watchmaker’s signature piece is the Lange 1, and one of its signature complications is the perpetual calendar. The company has turned to its muse once again, this time allowing the calendar the run of the dial without a sister complication, such as a chronograph or tourbillon. This pink gold iteration is limited to 150 pieces.

IWC freely admits that in the 15 years since it first added a perpetual calendar to its oversize pilot’s watch, it has gone hard on the combination, returning to it no fewer than 37 times. IWC’s is no ordinary calendar: As well as showing both Northern and Southern Hemisphere lunar cycles, it needs adjusting by just one day every 577.5 years.

With its visually unapologetic Blast Hourstriker, Ulysse Nardin has upended the once-subtle art of minute repeating watches, both in aesthetic and engineering terms. The watch’s chiming mechanism, devised with the French audio specialists Devialet, employs a titanium membrane, visible through the dial, in place of the usual gongs.

Montblanc’s globe-trotting Geosphere travels to the desert this year, inspired, says the brand, by the Italian adventurer Reinhold Messner’s 2004 solo trek across the Gobi. The familiar twin domes on the dial are now surrounded by a bronze case, a brown ceramic bezel, a smoky lacquered dial and a vintage-brown Sfumato calf strap.

The German watchmaker Nomos Glashütte is still going quietly but effectively about its business. Here, it returns to the Update concept, putting its in-house ultrathin automatic movement into the Metro line. The visual tick is a date displayed via two red dots around the dial; the neat mechanical achievement is its bidirectional quick adjustment system.

Not quite half a century on, the playful, asymmetric lines of Piaget’s Limelight Gala designs have lost none of their ’70s high-society charm. And the house says this is the first time it has decorated the famous cocktail watch with a rainbow setting. Finding stones that graduate in both size and color is a tall order, so production will be very limited.

Based south of Basel, away from the watchmaking heartland of Switzerland’s west, Oris is determinedly independent and something of an industry anomaly. So, too, are its new Cotton Candy watches, which combine bronze cases and bracelets with bright pastel-colored dials. This one is Lipstick Pink. Why? According to the brand, why not? Indeed.

Such is the longevity of the Excalibur’s madcap name, and even madder aesthetic, that it scarcely raises an eyebrow these days. Roger Dubuis is still finding new ways of expressing it, though, this year adding a refreshed case design; a new, lighter, longer-running flying tourbillon movement; and a nontarnishing case material called Eon Gold.

Whether as S.I.H.H. or Watches and Wonders, the Geneva fair has never boasted such a powerful watch brand arsenal as it will this year. But not everyone showed up. Beyond the close comforts of the fair collective, there’s a riot of high-profile brands vying for attention on their own. Here are just four.

A.P., as it’s known, had absented itself from the fairs before the pandemic. Last month it announced its new collection digitally, but in the presence of Don Cheadle (“War Machine”) and the Marvel Universe. The brand has said it will introduce a watch to bring the two together on April 10, but, here, an update to the hefty Royal Oak Offshore Diver, now with interchangeable straps.

Breitling is another that struck out on its own before fairs were canceled, deciding to rely on a series of “summits,” as the brand calls them. The most recent was April 6, where the company announced a new collection called Premier Heritage. Plucked from the company’s 1940s archive, the line includes this Datora piece with day, date and moon phase indications.

Those familiar with Chaumet will recognize the pear shape of its Joséphine Aigrette jewelry collections, originally created for Napoleon’s flamboyant empress. The form appears in a Chaumet watch for the first time this year, introduced during fashion week in Paris last month. This model is in polished rose gold and set with diamonds.

Swatch Group’s high-profile exodus from Baselworld meant it was never likely to return to centralized activities this year. Two weeks ago, Omega, the group’s most powerful dial name, lifted the veil on a reworked collection of Seamaster 300 diver’s watches, and on this Bronze Gold version, cased in a novel alloy that is said to patinate slowly, without bronze’s usual verdigris.

When Polka Dots Signal Both Optimism and Disquiet

Jennifer Aniston and J.Lo Both Wore the Denim Trend I’m Replacing Skinnies With