Welding is a craft that requires the utmost patience and attention. Welding has been practiced centuries before and the Iron Pillar of Delhi (310 AD) made use of Forge welding. There are many different kinds of welding techniques like Plasma, Ultrasonic, Arc, Friction. The major difference among these methods is how the heat source is generated.

In a Butt Joint, the metal pieces are joined side by side in the same plane. They are commonly used in pipes and fittings and it is quite an affordable solution as well. Butt Joints are very simple to make but are also weaker compared to other joints. The Butt Joint has many different variations, some of them are listed below

Each of these Welds is used for different purposes. However, the most commonly used among them is the square groove weld.

An important aspect to consider is the Faying Surface. It is the area of metal melted during the welding process. Shaping the faying surface before Welding can improve the strength of the joint as well as give a better appearance and offer deep weld penetration. The edge

preparation could be done independently on both the members of the butt joint or done similarly.

Butt Joints are best used for thin sections. With thicker metals, it is best to resort to a different Weld Joint to get better penetration. Defects in Butt Joints include porosity, cracking, etc.

In Tee Joints, the two pieces are welded at approximately 90 degrees with the edge of one lying at the center of the other piece. As a result, they form a T shape. Tee Joints are commonly used for welding pipes or tubes on a base plate. For an effective Tee Joint, there should be efficient penetration into the roof of the weld. There are 7 styles for creating Tee Joints.

This is the simplest arc welding method. It joins surfaces that are right-angled or approximately perpendicular.

Commonly, Tee Joints do not involve grooves. However, if the base workpiece is thick and if welding on the two sides cannot manage the desired load, a groove can be used. A defect that is found in this kind of joint is Lamellar Tearing. A stopper is placed on the Tee joint to avoid deformations. 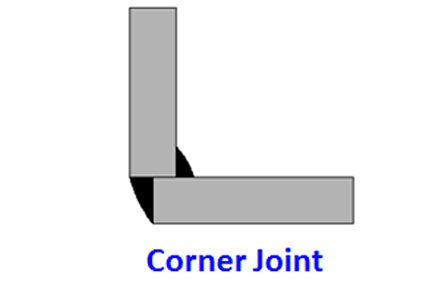 Corner Joints are quite similar to Tee Joints. The only difference is in the position where the metals are joined. In corner joints, the metals meet at the corner while in Tee joints, it is at the middle. Corner Joints are amongst the most popular and commonly used Welding Joints. It is commonly used in the manufacture of box frames and in other applications that require less load-carrying capacity. Corner joints can be made in an open or closed position.

The root of a Single-sided weld is quite weak, especially when loaded in tension and therefore the corner joints ought to be welded from both sides for adequate strength. Another possible defect is the occurrence of oxides along the centerline in single-sided welds. This will further decrease the strength of the weld. The best solution is to use Pulsed AC-TIG.

The welding styles commonly used in corner joints include

Lap Joints are normally used to weld pieces of different thickness. Weld can be made on one side or on both sides it is quite similar to Butt joints. The two metals are placed on top of each other in an overlapping manner.

Lap Joints are mainly used for Sheet Metals and rarely used on thick materials. These are some of the strongest welding joints. For ensuring maximum efficiency, the overlap has to be at least thrice as thick as the thinner joining member. Common causes of failure in Lap Joints include Lamellar Tearing and corrosion due to the overlapping materials. 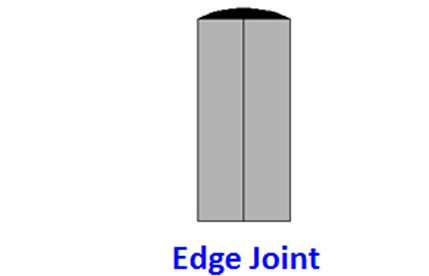 Edge Joint is mainly used to weld identical parallel members that are adjacently placed. The members can also have flanged edges as well. The similar edges of the two parts are welded. This joint is not the strongest since the weld does not penetrate the thickness of the entire joint. As a result, it is best used for welding sheet metals. There is no filler material involved and this method does not need any preparation.

However, Edge joints are not commonly used and they should be avoided in high-stress or pressure situations. Some of the defects that edge joints may face include corrosion, porosity, slag inclusion, etc. Commonly used styles in Edge Joints include

In this article, we have looked at the different kinds of Weld Joints and the welding styles used in all of them. The normal forces that act on a Weld Joint include tension, compression, torsion, and bending. Different Welding Joints have different capabilities to withstand these forces. Some joints can easily distribute the forces while others cannot. Hence, depending on the application, the appropriate Welding Joint has to be chosen. Else, the joint might fail.

The next Star Trek movie is scheduled for 2023