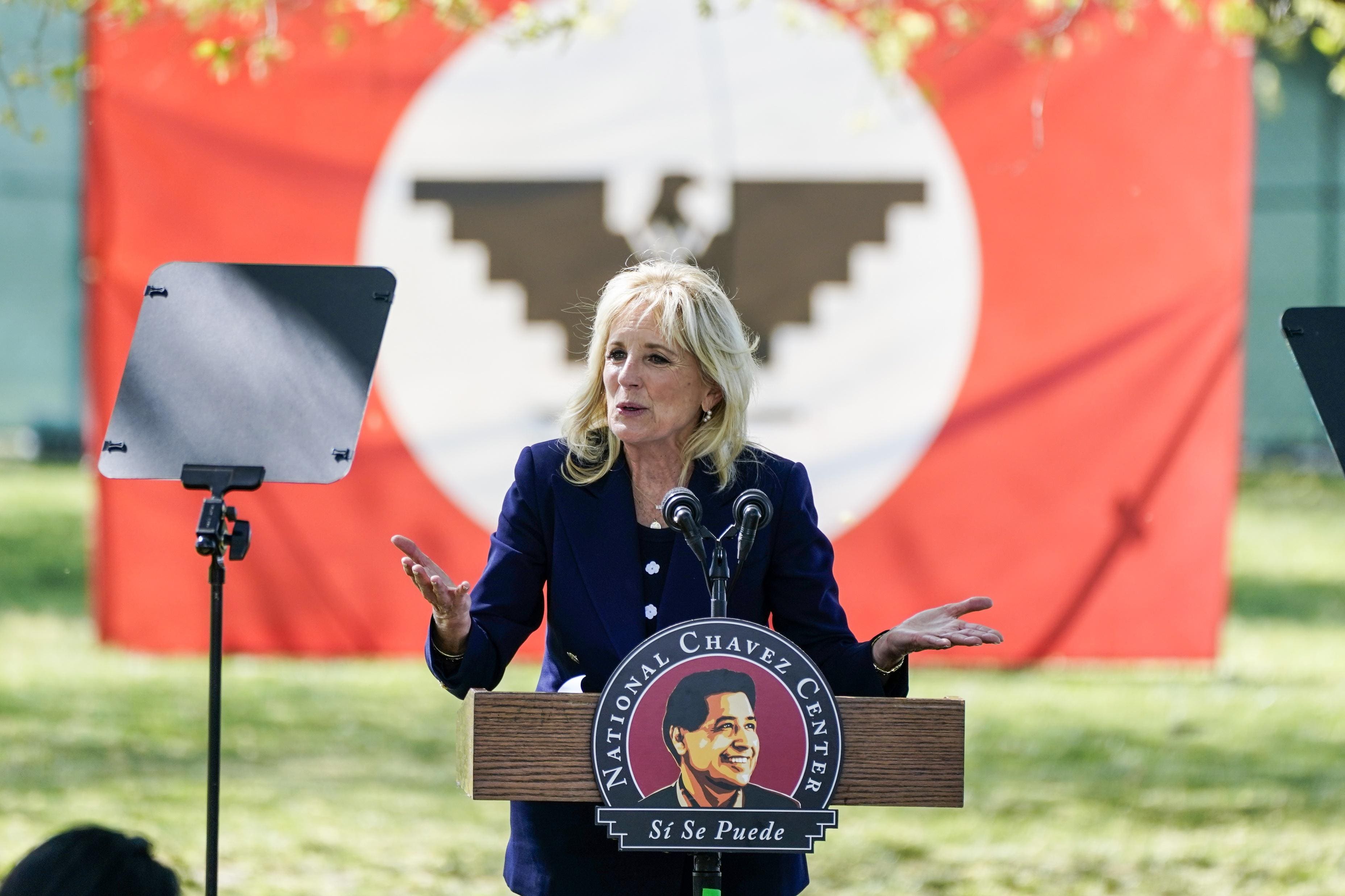 It was no “April Fool’s Joke” as some users on social media suggested that First Lady Jill Biden stood in front of a flag that resembled a “giant Nazi eagle” during a speech on Wednesday to mark Cesar Chavez Day. The flag in question was actually the United Farm Workers (UFW) union flag. The UFW, which was founded in 1962, is the country’s first permanent agricultural labor union.

The group has no Nazi or even national socialist ties, and the flag was reportedly designed by Chavez’s cousin. However, many users apparently saw some striking similarities to flags employed by the Third Reich.

Other users also jumped on the flag:

It is worth noting that such imagery is now routinely called out on social media. A little over a month ago the stage at the Conservative Political Action Conference (CPAC) also made the rounds for its likeness to a Nazi symbol.

However, this week Dr. Biden was also in the spotlight following her speech for her choice of words. Across social media she was mocked for mispronouncing the phrase “¡Si Se Puede!,” which translates to “yes we can.”

Many users on social media took her to task for her mispronunciation.

“It’s ‘Si se puede’ (Yes you/we can) not ‘Si se pwadueh’ I can’t even imagine what word she was trying to say. Seriously why even try pandering if you’re going to butcher it and not practice before?!,” suggested Joanna Rodriguez (@joannamrod), a communications director for the Republican Governors Association.

Media Strategist Giancarlo Sopo (@GiancarloSopo) jumped into the fray and wrote, “Not a big deal, but I’m old enough to remember when President Trump’s mispronunciations would consume news cycles.”

However, some in the media did notice.

Journalist Dania Alexandrino (@DaniaPeriodista) asked, “Si se what???? I’m sure some one will surely tell Jill Biden ‘puadray’ is NOT a word in the Spanish dictionary. For those who are celebrating her effort, yeah NO! Very far from ‘Si se Puede’ which means ‘Yes (we) can.’ We in parenthesis because it can also be yes you can!”

It didn’t take long from there for former First Lady Melania Trump’s name to be invoked, and by Thursday afternoon both First Ladies were trending on social media.

The Twitter account AllegianeToLiberty (@AllegianceTL) noted, “Melania is fluent in Slovenian, French, German, Italian and English. Jill Biden can’t even say one scripted line of Spanish without butchering it…”

Once the supporters of former President Donald Trump and Melania Trump came out swinging, the hostility quickly amplified.

There was a time when families, including the First Lady, wouldn’t have been subjected to such scrutiny. Social media has certainly changed the rules. What should be upsetting is that Mrs. Trump has largely stayed out of the spotlight since leaving the White House in January and this is hardly the first time she has been so openly mocked.

That should be upsetting given that President Joe Biden, Dr. Jill Biden’s husband, has called for unity and to heal the nation. However, as has been seen once again on social media is that there is such open hostility that any chance of reconciliation or even a return to the decency that President Biden has called for is all but impossible.

While it is easy to post such memes, it is clear that social media isn’t about supporting a cause or position, but it has become a tool to tear down the other side.