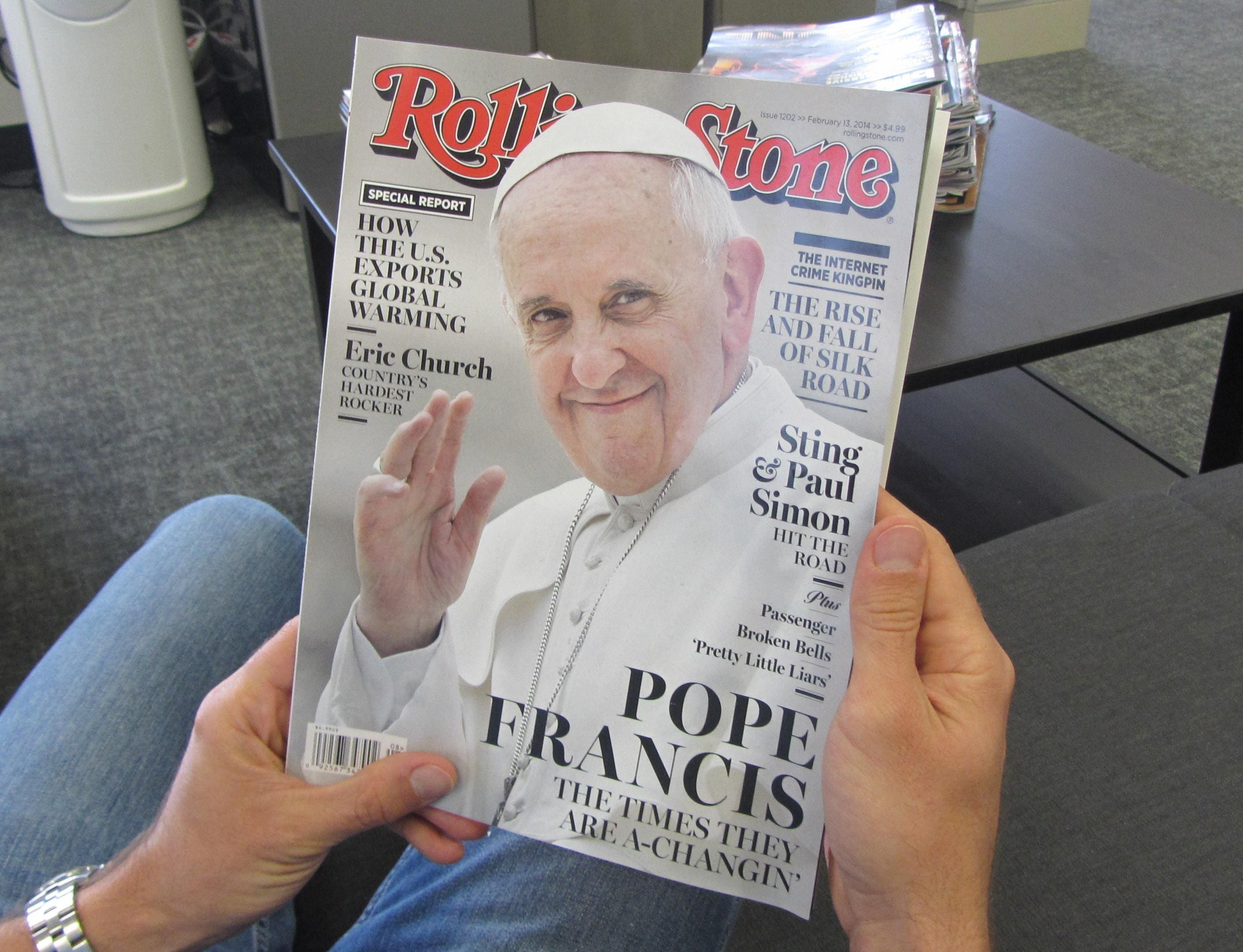 The hashtag #BoycottRollingStone began to trend on Friday morning, following the publication on Thursday of HillReporter.com’s Tara Dublin story titled, “The Demise of Rolling Stone: How A Legendary Magazine Sold Out to Trump and the Saudis.” In the piece, Dublin reported the music magazine that was once “a shining beacon of rebellion” lost its edge after it was sold to Jay Penske, the son of reported Trump-backing multimillionaire Roger Penske. The article suggested that Rolling Stone subsequently donated to the Republican Party and GOP Super PACs.

As for the ties to the Saudis, Dublin further added, “Jay Penske took $200 million from a Saudi Arabian government-backed company, SRMG, but has neither explained the loan nor the relationship.”

However, the article hasn’t offered concrete proof of the allegations of actual ties to Saudi Arabia, and Rolling Stone has yet to offer an official response.

Yet for many, it was just part of the tipping point in the social media backlash against the formerly esteemed music publication.

Earlier in the week the MeidasTouch (@MeidasTouch), a committee formed in March 2020 to stop the re-election of President Donald Trump, called out freelance reporter Seth Hettena for his investigation into the group. MediasTouch, which called the piece a hatchet job, had noted that Hettena had previously voiced his support for President Trump as well as his opposition to a $15 minimum wage on social media. The group posted a video podcast on YouTube earlier in the week with the title, “MeidasTouch EXPOSES Hack Rolling Stone Reporter Seth Hettena” explaining their side of the story:

MeidasTouch then posted on Twitter, “As part of our commitment to transparency, we prepared this statement describing the bizarre conduct directed at us and the Meidas Community by freelance reporter @seth_hettena who claims to be working with @RollingStone and have sent a separate legal response directly”

The timing of Hettena’s piece was questioned on social media.

“Let me get this straight… arguably one of the most successful anti-Trump groups of 2020, @MeidasTouch, is now being attacked in a Rolling Stone hit piece… Who owns the @RollingStone? Well, isn’t that a coincidence. It would be a shame to share this photo,” wrote economist Eric Feigl-Ding (@DrEricDing).

Across Twitter, many users jumped on the hashtag #BoycottRollingStone and by Friday afternoon there had been more than 54,000 tweets, many suggesting the once avant-garde magazine had lost its way. The effort was also led by MeidasTouch, which posted, “After learning what we now know, we have no choice but to use our First Amendment right to encourage everyone to #BoycottRollingStone. Pass it on.”

However, at least a few users on social media were opposed to such calls to boycott the magazine of record.

“Sorry but I make my own decision and will review it and see if I want to boycott. People need to start waking up and make their own decision and not boycott things just bc they ‘apparently’ support a certain side,” wrote @RyoWo13.

Independent filmmaker Lorenzo P. Adams (@RealLPAdams) followed up by noting, “I actually agree with this.

@MeidasTouch seems well versed in exposing corruption for the greater good of the people…when the corruption is conservative or republican. I can’t take these people seriously until that same energy is kept for democrats as well”

Moreover, a few conservative voices certainly found some irony in the calls to boycott a publication that had so long been the voice of the left.

Political analyst Matt Couch (@RealMattCouch) wrote, “There’s very few groups that have wrote more slanderous hit pieces on myself and others over the last few years than Rolling Stone Magazine… The fact the left wants to boycott it because they think it helps conservatives is hilarious! Please do LOL!”

Of course some simply took time to share memes that poke fun that the magazine of the counter culture was now a victim of cancel culture.

One part of the story is whether such calls to boycott an established media outlet are misplaced.

“The #BoycottRollingStone story is fairly tangled, and apparently began after HillReporter published a piece about the magazine’s trajectory since it was acquired by Jay Penske, son of Roger Penske – auto racing tycoon and owner of Penske products – whom Trump awarded the medal of Freedom,” explained Charles King, principal analyst at Pund-IT. “The article alleges that after acquiring 100 percent ownership of Rolling Stone in 2017 and 2019 deals, that Penske fired longtime staffers and replaced them with less experienced writers and hacks who tilted the magazine’s political coverage to the right.”

The fact that such calls are being made on social media show how significant of a story this has become.

“The wider issue is whether the political leanings of corporate owners or those they employ can or should impact the customers of their businesses,” said King. “Those are certainly issues that have come up in the past related to everyone from the Koch brothers to the Walton family to George Soros to Bill Gates to companies that advertise on programs hosted by controversial radio and TV personalities. In the end, the decision to do business or withdraw support is more or less personal.”

The Power Of Social Media Boycotts

This could also be a case where the voices on social media – even among those who may have never subscribed, could certainly tarnish the brand.

“Hill Reporter’s allegations that Penske has essentially changed the profile or personality of Rolling Stone, is subtler but just as important. Rolling Stone has drifted far away from its original roots as a counterculture instrument,” added King. “However, if devoted readers believe the magazine’s owner is leading the publication in radical directions they can’t or won’t support, their decision to #BoycottRollingStone and/or its advertisers could diminish or destroy a multi-million dollar investment. If that occurs, Penske Rolling Stone strategy could become a pointed lesson in the dangers of hubris.”

Social media has certainly made it easier for a boycott to gain momentum.

“Boycotting a brand because of its ties to something or someone you don’t like has become relatively common by the right, and now it appears the left has embraced this questionable tactic,” suggested Rob Enderle, principal analyst at the Enderle Group. “This behavior is hazardous because these efforts are often not based on fact, resulting in massive amounts of damage to companies, and their employees, that have done nothing wrong. The better reason to abandon a publication is if it is proven it be compromised, alleged here, or stops covering exciting stories.”

In other words, punishing a company for an executive’s behavior, even an owner, effectively punishes all of the employees, many of whom may agree with you, warned Enderle.

“The collateral damage from an effort like this, particularly if it is based on wrong information, could be devastating,” he noted. “Right or wrong, this is manipulation at scale, and this event was triggered by the belief that a yet-to-be-published story would be damaging to the PAC MeidasTouch, without any determination on whether that story was true or not. It is never wise to provide powerful entities with the power to destroy negative stories preemptively; people have a right to know and make their own decisions.”

This could also result in further efforts, and with social media as a catalyst it could be far easier than those letter writing campaigns of old. Moreover, both sides in our national divide could call for similar boycotts. Right now it has been the left that has been vocal with similar efforts direct against companies based in Georgia.

“What is good for the goose is good for the gander, which means the left can’t very well object to the right doing this if it is doing it as well,” said Enderle. “The irony here is that the effort appears to be focused on destroying a story that could be true – we don’t know because it wasn’t published – by creating information that may not be true – hasn’t been validated – to kill the story. I think it would be a far better approach to wait until the story was published and then, based on the story content, decide on a response right now; we don’t even know for sure the story would be harmful, let alone whether it would have been poorly founded.”